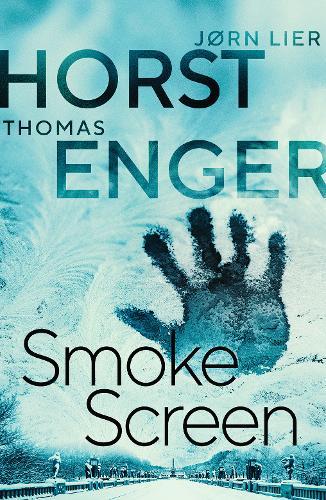 It's delightful to read a crime novel, created by the collaboration between two of your favorite Nordic authors, Jorn Lier Horst and Thomas Enger. Horst is widely known for his Inspector Wisting book series which has been adapted into a successful television show (for a full review click here) while Enger is the man behind the popular Henning Juul novels and some great standalone ones like the superb Inborn. Horst has also worked as a Senior Investigator Officer at the Norwegian police force and his experience proves to be invaluable for his detailed descriptions of the police procedures that dominate his writings. Enger, on the other hand, is a former journalist and the perfect man to create characters such as Emma Ramm who works for an online newspaper and investigates cases in her own way. Smoke Screen is the second installment in the Alexander Blix and Emma Ramm series, following Death Deserved (for a full review click here), and exceeds the, admittedly high, expectations set by the previous volume. Both authors leave their distinctive mark in the text and the reader who is familiar with their previous work can trace certain characteristics that are reminiscent of their particular writing style. There is a comprehensive analysis of the police work and the stages of an active investigation, most likely written by Horst, and an explosive pacing which can be attributed to Enger whose thrillers tend to move forward in a quick tempo. This combination results in a high-octane mix of the classical police procedural and thriller that guarantees entertainment and excitement from the first page until the last one.

The story is set chronologically a few months after the events of the first book took place. Alexander Blix and Emma Ramm struggle to put behind them the traumatic events of the so-called "Countdown Murders" that affected them both personally. In an attempt to overcome her overwhelming feelings of fear and anxiety, Emma decides to go to the fireworks display at Oslo's city hall on New Year's Eve, just to prove to herself that nothing bad is going to happen and that her stressful thoughts are completely unfounded. Unfortunately, a bomb, placed in a nearby rubbish bin, goes off and several people are severely injured while some of them die on the spot. Emma's boyfriend, a Danish journalist named Casper, is among the victims and the young journalist is grieving the loss of her partner while at the same time having to suppress her own feelings of guilt. If it wasn't for her, Casper may still be alive. Nevertheless, she soon understands that the only way to feel better is to do something so she digs her heels in the case and starts to make her own inquiries.

Alexander Blix is one of the first officers on the scene and he attempts to save a young woman's life by diving into the icy waters of the harbor to retrieve her body. The woman, who is hospitalized, is believed to be Ruth Kristine Smeplass, a drug addict known to the police from a ten-year-old case that involved the abduction of her daughter, Patricia, who was never found. Blix has worked on the case and devoted many working hours to get to the bottom of it, to no avail. Patricia's father, Christer Storm Isaksen, is now in prison because he killed a man who was seemingly an accomplice to his daughter's kidnapping. Blix suspects that the bombing was not a random terrorist attack but perhaps the target was Ruth Kristine for reasons that he will have to find out through meticulous police work.

The story is narrated through alternating chapters between Blix and Emma who work separately, but as their investigations begin to correlate, they exchange information and cooperate to solve the mystery. Blix is a kind of father figure to Emma, and he cares for her while she feels that she owes him something because of a tragic event that happened when Emma was a little girl. Their relationship is a complicated one and both of them are genuinely trying to help each other, even if that means that they will have to make certain compromises. Blix, as a police officer, is not supposed to leak information to journalists, but for Emma's sake, he is ready to violate his principles to help her. Both protagonists have a personal stake in this case, Emma wants to know who is responsible for Casper's death while Blix gets another chance to close an old case that still haunts him.

Smoke Screen is an ideal choice for all Nordic noir fans and especially for those who are particularly interested in the Norwegian interpretation of the genre. There is a massive plot twist halfway and the second part of the novel is full of more surprises as the story reaches its climax. The final pages are filled with revelations and action while the ending is gratifying and explains everything without leaving any question unanswered. In my opinion, this is an even better book than the previous one, despite the many similarities in terms of plotting and pacing. The storyline in Smoke Screen is more absorbing and the thriller element is smoothly incorporated in the text, forcing the reader to keep turning the pages to find out what happens next. The third installment in the series has already been published in Norway (original title: Slagside) and I hope that we will soon have the chance to read its English translation.

You can buy this title on Amazon.com: https://www.amazon.com/gp/prod...