This is what happens when two Norwegian crime fiction masters collaborate. 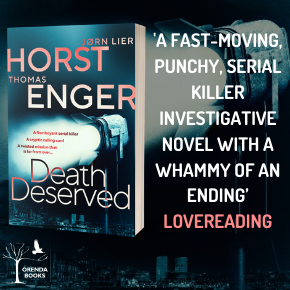 This book is a real treat for all Nordic noir fans around the world as the names of both Thomas Enger and Jorn Lier Horst guarantee a high-quality serial-killer thriller, a roller-coaster ride filled with action, tension, and suspense. Death Deserved is the first installment of the Alexander Blix&Emma Ramm series and if one can judge from this first book, it will be a major success, both critically and commercial in the years to come. It should be stressed, for those unfamiliar with the work of the two Norwegian crime authors, that J. Lier Horst is a former Senior Investigating Officer at the Norwegian police force, while T. Enger has studied journalism. Thus, it is easy to discern who is the creator of each of the protagonists. Horst must be the man who devised Blix's character as he is a middle-aged homicide police investigator and Enger is responsible for the character of Emma Ramm, a celebrity blogger-journalist who works mainly through the social media. Alexander and Emma are connected further by a horrendous event that occurred many years before and scarred both in a way that is beyond repair. The secret that binds them together is revealed in the middle of the book and I believe that there will be further development in their relationship as the series will run its course. I think that they are both brilliant characters, three-dimensional and with a heavy burden of secrets weighing on them.

The story, which is set in Oslo, begins with the disappearance of a famous former long-distance runner, Sonja Nordstrøm, who would soon publish her controversial autobiography, titled "Forever Number One". The investigating team, led by Blix, treats the case as a possible abduction and finds some clues in the victim's house that suggest that this is a work of a repeat offender, even perhaps a serial-killer. The perpetrator has left a piece of paper with the number one written on it, something that puzzles both Blix and his sidekick, officer Kovic. In the following days, there will be bodies found in certain key-places that suggests an intelligent, cold-head criminal who uses people as objects to murder celebrities and people who are famous no matter for what reason. Soon, Emma will join the police and become part of the investigation as she is the one journalist that the killer seems to choose as his biographer. The story, apart from being thrilling and exciting throughout, raises some interesting questions regarding the nature of fame, what attracts people to it and its effects on people's lives. I found it comforting that a new Scandi-Noir novel returns to one of its roots, which is social criticism. In the last few years, we are witnessing the attempts of many Nordic crime authors to impress the reader with labyrinthine, over-elaborate plotlines that end up being confusing or with an over-the-top characterization that dictates that the average Scandinavian detective is obliged to have at least two or three specific vices and a chaotic personal life that seems to be constantly on the brink of collapse.

What impressed me most in Death Deserved is the masterful manner in which the two Norwegian authors handle the plot's pacing which is fast even from the first pages of the book, though becomes frenetic especially in its second half. We are following the events of the plot through the perspective of several characters, the emphasis being given to Alexander and Emma, as well as that of the victims. This is a book that I've finished in two sittings and if I've had the time, I am certain that I would have completed even in one. The short chapters add to this effect while the high level of suspense generated from the mystery around the killer's identity and his constant elusiveness as he is always one step ahead of his persecutors. This is a novel that you will definitely not regret to purchase as it offers a first-class thriller experience and leaves a promise for more to come soon. After the epilogue, there is a witty dialogue between Horst and Enger where they both thank the people that helped them with the book.