The Other Me: Catharsis

WARNING: The article below contains spoilers.

In 2016, Sotiris Tsafoulias directed the Greek serial-killer motion picture The Other Me (original title: Έτερος Εγώ), featuring a plot that involved a perpetrator who murdered his victims in a brutal manner and left behind in the crime scenes quotes of the ancient Greek philosopher and mathematician, Pythagoras. The screenplay was co-authored by the well-known Cypriot crime fiction author, Tefkros Michaelides, who also wrote a novella, Periptosis Aftodikias, which inspired the creators of the film as far as the main storyline is concerned. The Other Me was a huge commercial success here in Greece and critics hailed the movie as one of the most compelling native productions of the genre. Three years later, the same team aired an informal sequel to the film in the form of television series which was distributed by the Greek broadcasting service, Cosmote TV, under the title The Other Me: Lost Souls (full review here). The show adopted the same plot trope of a serial-killer murder who wreaks havoc in Athens and whose murders are imitations of the six labors of Theseus, a legendary figure of Greek mythology. The protagonist in both the movie and the show is the criminology professor, Dimitris Lainis, a reserved and quiet character who is cooperating with the authorities in order to solve a series of disturbing atrocities and arrest villains who seem to enjoy puzzles and playing cat-and-mouse games with the police.

The story begins when a young woman, student at the University in which Lainis is lecturing, is found murdered in a hotel room, strangled and stabbed 21 times in her torso. Ilias Velissaratos (Constantine Markoulakis) is arrested for the murder as he wakes up in the hotel room where the killing took place while his fingerprints are all over the murder weapon. Lainis is convinced that his friend and colleague is innocent and immediately contacts the retired chief of the Homicide Unit, Apostolis Barasopoulos (Manos Vakousis) to ask for his help. Velissaratos insists that he is being framed due to his recent appointment as a nominee for the upcoming elections for the University's new dean. Lainis suspects that something is amiss regarding the University's financial situation and he is soon drawn into a nightmarish scenario when a second student is found murdered in a grisly way.

At the same time, a new chief is appointed to Athens Homicide Unit, Nikos Vanortas (Tasos Nousias), a seasoned investigator who is transferred from the Narcotics Division. Vanortas has a hard time trusting his inner thoughts to the rest of the team and seems to be rigid and impatient when it comes to others obeying his orders. His Lieutenant, Pantelis Sklavis (Petros Lagoutis) distrusts him and the cooperation between them comes to a halt when Vanortas asks him to something unthinkable. The Unit, as a whole, are surveilling a group of thugs who run a prostitution ring in the city which is led by a mysterious kingpin known as "The Reptile", a man no one has ever seen and his identity remains a well-hidden secret among the city's heavyweight criminals.

There are two main plot threads that merge into one as the plot evolves and the show reaches its shattering climax in the sublime final episode. The first one revolves around the University's elections and the second one focuses on the inner workings of The Reptile's gang. The audience witnesses a fair amount of double-crossing and backstabbing as the story ends up being a battle of wits between the authorities and the enigmatic Reptile. There is a lot of suspense and tension as well as a number of effective plot twists, especially after the fifth episode and the viewers should brace themselves for a grand twist concerning the true identity of the Reptile. The show ends in a cliffhanger and I hope that we will have the chance to watch what happens next in a new, third season.

The performances are more than decent and once again Dadakaridis nails his role as the autistic criminalist who becomes a pawn in a game that he struggles to comprehend before it's too late. Nousias and Lagoutis are convincing as the police officers in charge of the whole operation while Vakousis has a much smaller role than he had in the previous season. Dimitris Kapetanakis is worthy of a special mention as he is excellent in the role of the small-time enforcer, Alkis Masatos. His interactions with Sotiris (Sotiris Tsafoulias) are hilarious and offer a brief comic relief to the overall bleak story. Veteran actor Spyros Papadopoulos plays once again the Police Commissioner and the stunning Vicky Papadopoulou returns as the nosy journalist Christina Stergiou.

Of course, as it happens with every show, there are some flaws regarding mainly the depiction of certain institutions like the prison which is closer to the Star Trek saga than the contemporary Greek reality. Nevertheless, this is a work of fiction and the audience should suspense the disbelief in order to be able to enjoy the viewing experience. The overall aesthetic result is ravishing and this is what matters first and foremost. The make-up team did a tremendous job, equal to that of the biggest productions in the U.S. and the rest of Europe. I am really proud as a Greek to review a television show that is binge-worthy and I truly hope that there will be more. Thank you Sotiris Tsafoulias! 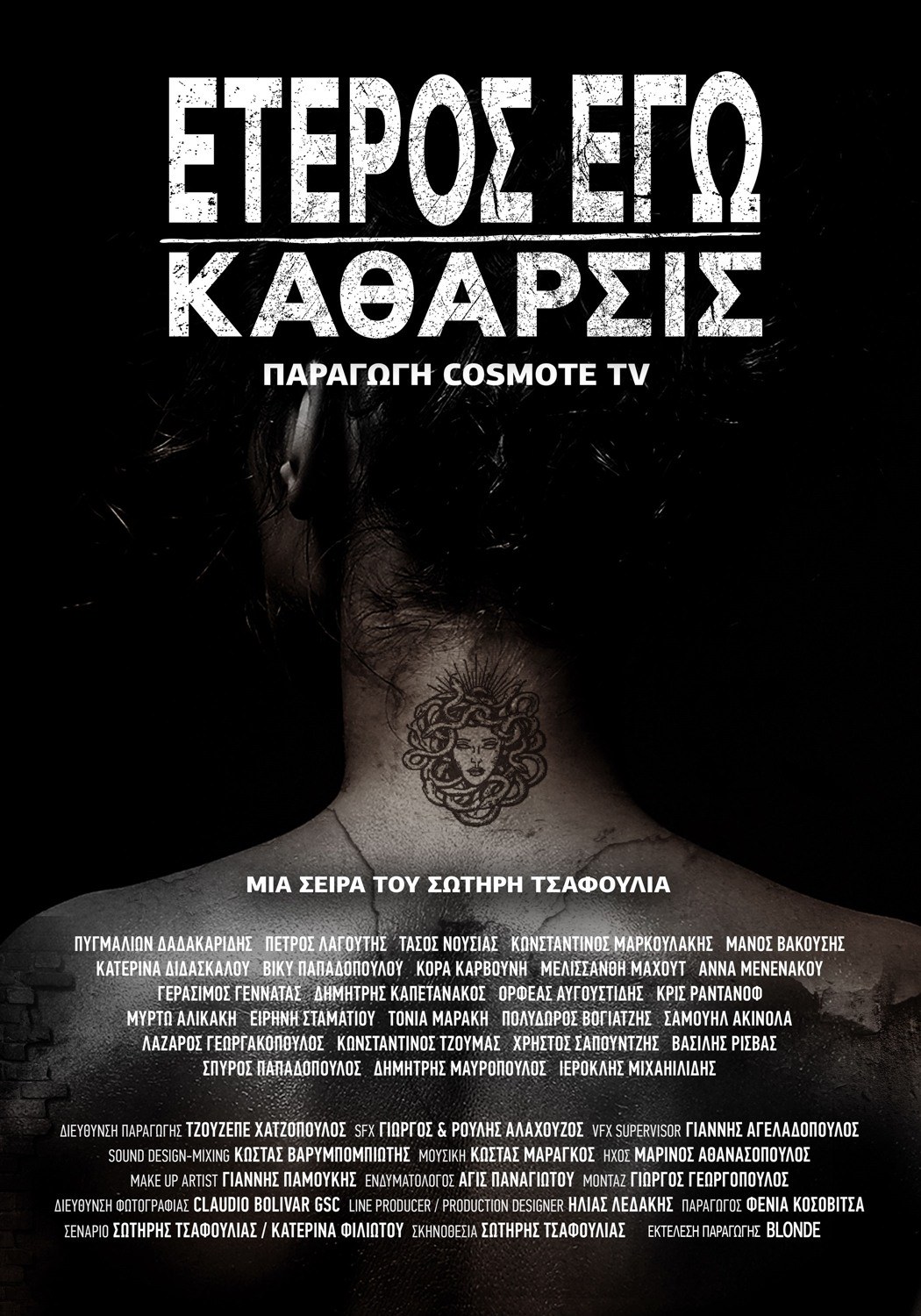 The Other Me: Catharsis