It meets the high expectations established in "Unrest". 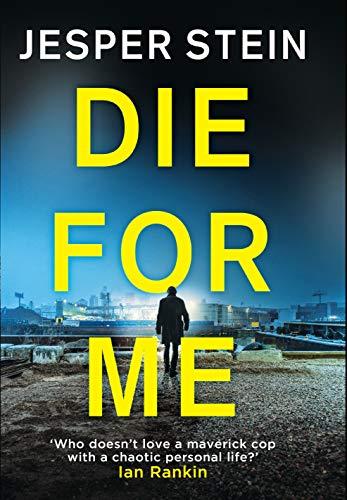 This is the second installment in the Axel Steen series (original title: Bye Bye Blackbird) and also the second that has been translated in English, after the intriguing Unrest (for my review click here). Stein established himself as a worthy representative of Scandinavian crime fiction in the English-speaking audiences with Unrest and I had pre-ordered Die For Me in amazon months before its official release, as I couldn't wait for more. Happily, the book delivers and this is something rare when the expectations are set too high from the reader. This is a bit different novel than the previous one in terms of narrative technique but maintains the thrilling plotline and great characterization that we first encountered in Unrest. Axel Steen is a rogue homicide detective in the Copenhagen police force and he is known to his colleagues for his volatile character and the high-efficiency rate in case-solving. Axel is a rather troubled individual, he is divorced from his wife, Cecilie, and has a little daughter, Emma whom he sees every other week as arranged by the lawyers. He has some vices that also drag him down, the most prominent being his proclivity to smoke hash regularly, thus often becoming numb and spaced-out, distancing himself from other people and his surroundings. The beginning of the book finds Axel going through a tough phase in his life, as his ex-wife and daughter are outside Denmark and he is alone in his apartment in one of Copenhagen's most underprivileged neighborhoods, Nørrebro, puzzling over a new case that shares common characteristics with a previous investigation, one that finally led to his divorce and loss of his family.

The main theme of the book is rape, so be prepared for some graphic descriptions of the attacks and their aftermath, the way(s) that such an event affects the lives of the victims for the years to come. Furthermore, the reader has the opportunity to contemplate the subject through the perspective of a police investigator, thus learning some truly interesting facts about this particular crime. Jesper Stein is an acclaimed, experienced journalist whose background adds to the plausibility and truthfulness of the events and characters presented in Die For Me. Moreover, Stein describes Copenhagen with vivid realism, especially life in the degraded inner-city areas where immigrant gangs, motorcycle clubs, and drug dealers are lurking in the streets.

The story begins with a flashback to four years ago when a young girl was found drowned in one of Copenhagen's largest parks. This case would remain unsolved, despite Axel's frantic attempts to find the culprit and was finally shelved. The police dubbed the case as the "Blackbird" investigation, a reference to the jazz song by Miles Davis and Chet Baker, and four years later it still haunts Axel and his colleagues. When a young woman gets raped in Nørrebro with unprecedented brutality, the forensic team of the Copenhagen police force finds DNA that links the perpetrator of the rape with the man who killed the girl in the "Blackbird" case. Axel realizes that he has a chance to settle accounts with the past and arrest the culprit who is responsible for a series of many savage attacks on young women in the Nørrebro area for the last 12 years at least.

The story is narrated mainly through Axel's perspective but also from that of the Deputy Commissioner of the Copenhagen police force, Jens Jessen. Jessen is Axel's frenemy as he is the man who stole his wife and now lives permanently with her and his daughter. As you can imagine the relationship dynamic between them is sensitive and full of suppressed tension, as Axel is obliged to cooperate with his superior in order to move the investigation forward. The plot unravels in an even, neither too fast or slow, pacing and there are also all the trademark characteristics of a classic police procedural: plot twists, red herrings, and the whodunit element.

Overall, I found Die For Me to be of equal brilliance to Unrest, a solid police procedural that the reader can devour even in one sitting. The story flows naturally, the suspense is alive throughout the book while the main character, Axel Steen, is one of the most compelling detective-protagonists in Scandinavian crime fiction. Even though this is part of a series, it can be smoothly read as a standalone, but keep in mind that it will be more difficult to comprehend the characters and their evolution if you haven't read the previous novels. Jesper Stein is a name that deserves a wider audience than Denmark and Scandinavia and I can only hope that in the future there will be more English translations of his books.