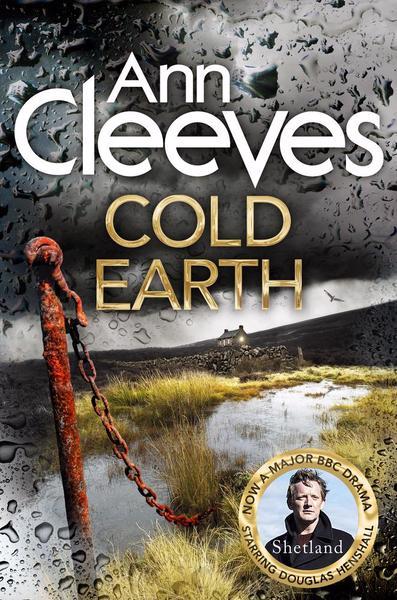 This is the seventh installment of the fabulous Shetland series, which has been also adapted for the television screen by BBC One, starring Douglas Henshall in the role of DI Jimmy Perez (you can read my review here). The show has become highly popular and made a lot of viewers search for the work of the Scottish crime author, Ann Cleeves, one of the most outstanding representatives of the Scottish Tartan Noir. Let's not forget that she is the author of another successful crime fiction book series, that of Vera Stanhope that has been also transferred to the television screen. To be honest, this is the first novel in the series that I've read, even though I've watched all five seasons of the titular TV show. The experience was gratifying and as I was reading Cold Earth, I was transported to the isolated, secluded islands of Shetland, the subarctic archipelago in the Northern Isles of Scotland situated in the Northern Atlantic, between Great Britain, the Faroe Islands, and Norway. The novel is a typical Scottish police procedural that begins when a massive landslide occurs in Shetland that unearths the body of a young woman who is unknown to the locals, most possibly a visitor to the island. Jimmy Perez is instantly hooked on the case and he entertains himself by imagining possible identities for the deceased woman. He prefers to imagine that she was Spanish, or from someplace in the Mediterranean, perhaps because Perez himself is of Spanish origin. Soon the local police will be able to attach a name to the dead body but the truth about who' murdered her and why will remain elusive for the major part of the novel.

As always, the reader is introduced to the so-called secondary characters in the series such as the shy and diffident Sandy, who will prove to be one of the hidden aces of the investigative team and the team that arrives from Inverness in order to help the local police with this murder investigation, Willow and Vicki. There is a hint of romance between Jimmy and Willow in the book, something strange as we are used to watching Jimmy grieving over the loss of his wife, Fran, who was stabbed a number of years ago. Jimmy and Wilow will quickly prove to be a formidable pair of detectives that will delve into the lives and secrets of the local community in order to find out the real motive behind the homicide of the young woman. The story unfolds through multiple perspectives and all the characters in this novel are significant and crucial to the evolution of the plot. Unfortunately, the ending is a bit of a letdown as the typical trope of one of the detectives being threatened by the perpetrator only to be saved in the last minute by Jimmy seemed less than satisfying, at least in my eyes.

Nevertheless, it should be stressed that Ann Cleeve's writing style is highly exhilarating and keeps the reader at the edge of his seat throughout the course of the book while the reader will have to guess many times the identity of the villain only to be disproved in the final 30 pages. The whodunit element is strongly present in Cold Earth and it constitutes the main reason why the reader can't keep his eyes off the book. Plus, the author's splendid, simple prose displaying not even a word redundant, is a lesson on how to write crime fiction without any leather. Perhaps it would be best to read this book on a winter night because the weather in Shetland is dark and cold but the fact is that it is a more than entertaining crime/mystery to devour at any time.