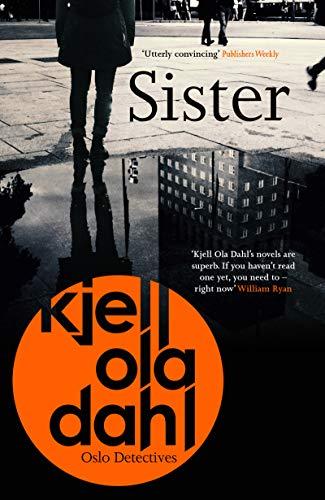 Kjell Ola Dahl is, along with the so-called "Norwegian Chandler", Gunnar Staalesen, one of the godfathers of Norwegian crime fiction and his books have been published in fourteen countries and won two Riverton Prizes, the reputable Norwegian literary award, for his novels, The Last Fix (2000) and The Courier (2015). Furthermore, Dahl is fortunate to be translated into English by one of the world's most experienced and skilled translators, Don Bartlett, who has also translated books by Jo Nesbø, Karl Ove Knausgård and Gunnar Staalesen among others. The last book by K. O. Dahl that I've read was The Courier (you can read my full review here), a superb, standalone crime novel featuring an elaborate plot unraveling in three different timelines, one of them being the Second World War era during the Nazi occupation of Norway. All the plotlines were masterfully interwoven and in the final climax, every piece of the puzzle fell into place. Sister is part of Ola Dahl's Oslo Detectives (#9) series and the protagonist is Detective Frank Frølich who now works as a private investigator after being kicked out from the Oslo police force. Frølich is not the typical Nordic noir detective-protagonist, fighting with his demons and various addictions, but a character who preserves his human traits and characteristics, in other words, a plausible, three-dimensional protagonist. The story is narrated solely through Frank's point of view and Dahl is avoiding the multiple perspective narration, one of the trademarks of the Nordic noir genre.

The novel's main theme is immigration which seems to be on the forefront of more Scandinavian crime authors' storylines, a recent example is Victim 2117 by Jussi Adler-Olsen. Nevertheless, in Sister, K. O. Dahl is not focusing on the immigrati9on crisis as it exists in many European countries but rather uses it as a plot device that moves forward his narrative. The book begins with Frølich, suspended from duty and working as a private eye, meeting a young woman, Matilde, and forming an intimate relationship with her. It is Matilde who urges Frank to undertake a case that involves a young immigrant, Aisha, who lives in a refugee asylum and is in search of her long-gone sister who is now living in Norway, perhaps under a new name. Frank is initially reluctant but is quickly convinced by both Matilde and her friend Guri, a young woman who is working in the refugee asylum and wants to help Aisha at any cost, to begin his investigation. Soon, he will discover that the case is much more complex than he thought as more and more people get entangled in it such as a journalist who is writing a book about immigration, his uncle, an ex-army veteran, and many others. Our protagonist will also meet some of his old colleagues who are not so keen on him due to past conflicts. Sister is a crime novel with a tightly-woven and absorbing plot that features a wide variety of well-crafted and strongly defined characters.

One of the plot-threads concerns a terrible accident that happened around three decades ago, a reference to the notorious MS Scandinavian Star fire, the passenger ferry that was sailing from Oslo to Frederikshavn in Northern Denmark, which killed 159 people on April 6, 1990. It is still considered to be one of the worst accidents that happened in Scandinavia and there is plenty of criticism on the investigation by the authorities and its final findings that blamed a dead passenger for the arson. In the novel, the name of the ferry is changed (Sea Breeze) and the -fictional- tragedy takes place two years earlier than the real one. For those who wish to learn more about the actual incident, there is a new, six-part docu-series premiering on Norway's NRK on 8 March, on Denmark's DR on 9 March and Sweden's TV4 on 2 April. The title is Scandinavian Star and it is a collaboration by director Mikala Krogh, journalist Lars Halskov and screenwriter Nikolaj Scherfig that aspires to shed a light on the true circumstances of this calamitous event. The accident is an important plot element in the novel and the author seems to hint that some major questions remain unanswered. Many of the facts surrounding this tragic incident remain unaltered in the book, so the reader can learn some basics about the accident.

It is a given that every novel bearing the signature of Kjell Ola Dahl is bound to enchant and amaze every Nordic noir aficionado around the world. The starkness of his prose, the strength of his characters and his exceptional dialogue parts guarantee entertainment combined with high-quality literary merit. If you are not already familiar with the Norwegian's body of work, then Sister would be a good place to start as it doesn't require any prior knowledge of events and characters, even though it is a part of a series. I want to sincerely thank Anne Cater and Orenda Books for offering me the opportunity to take part in this blog tour that also happens to be my first one. It was a great experience and I can only hope for similar events soon.