An innovative experiment by Lars Iyer. 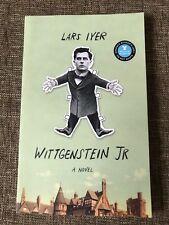 "After philosophy, we will be as children at play, he says. Any seriousness will be put-on seriousness. Any solemnity will be playful solemnity". (83%)

Lars Iyer is an author mainly known for his trilogy of novels – Spurious, Dogma and Exodus, while Wittgenstein Jr. is his first standalone novel. He is a philosophy teacher at Newcastle University in the UK and all his books share common themes and interpretive problems. This book is set on Cambridge and its infamous University where the children of the social elite are studying various scholarly subjects. One of them is, of course, philosophy and the book begins when a new teacher is appointed, a mysterious person who is immediately nicknamed by the students as "Wittgenstein", not because of his physical appearance which is quite different from that of the famous Austrian philosopher, but due to his eccentricity and difficulty in expression, both trademark characteristics of Ludwig Wittgenstein.

The teacher's odd, often inexplicable, behavior and the quirky manner in which he addresses several crucial philosophical themes and questions, intrigue a company of 5-6 students who are gradually seduced by the curious professor. The author unfolds his story through the first-person narration of one of the students, Peters, and through the chaotic inner thought processes of the titular protagonist. The latter has recently lost his older brother who committed suicide while being a professor at the other major English university, Oxford. It should be noted that the real Wittgenstein carried a horrendous familial history, as three, of his five in total, brothers were victims of suicide, so that's another trait that our protagonist shares with the Austrian intellectual.

As many of you already know, L. Wittgenstein was a philosopher who worked mainly with logic and the philosophy of language and his only two completed books, Tractatus Logico-Philosophicus and Philosophical Investigations, are both considered to be cornerstone texts for the above subjects. We can see "Wittgenstein Jr." as the philosophical alter-ego of the famous logician as we witness his meticulous, sometimes even painful, series of thoughts which make the protagonist obsessive and overly pessimistic for every aspect of life. The chapters featuring the protagonist's inner thoughts are written in a stream-of-consciousness style which in some parts is confusing and makes the text seem more convoluted than it is. Nevertheless, there are plenty of interesting insights made by our hero that help the reader to understand better the Wittgensteinian way of thinking and the emotional turbulences that shook his existence. Especially some of them manifest Wittgenstein's detachment from other people, his inherent loneliness and his gloomy worldview. Iyer also chooses to emphasize his protagonist's clash with his university colleagues and the overall status-quo of the Cambridge establishment.

The parts narrated by Peters, tell the story of several posh, snob Cambridge students who are usually bored stiff and spend their days consuming all kinds of drugs and chemical substances to deal with their everyday reality. Nevertheless, the arrival of the new professor has a profound effect on some of them, especially to our narrator, Peters. There is a hint on queer relations between professor and student and this is also based on reality as L. Wittgenstein was an admitted homosexual. The relationship between Peters and "Wittgenstein Jr." becomes the epicenter on the fourth and final part of the book in which Lars Iyer adopts a free-floating writing style consistent with the overall narrative tone of the book.

Wittgenstein Jr. is a book that will primarily appeal to those who have a philosophical background and are familiar, even in broad terms, with the basics of the Wittgenstenian thought. Yet, it could also be appreciated by people who haven't ever read philosophy as the major themes and questions that beset the protagonist are repeated and explained in a rather luminous manner. Lars Iyer blends fiction and reality and the result is an original, fresh kind of book that will certainly make you think about the nature of logic and reality while emotionally touching you through the devastating inner monologues of the protagonist.