Why Did You Lie?

A standalone horror/thriller novel by the Icelandic guru of the genre. 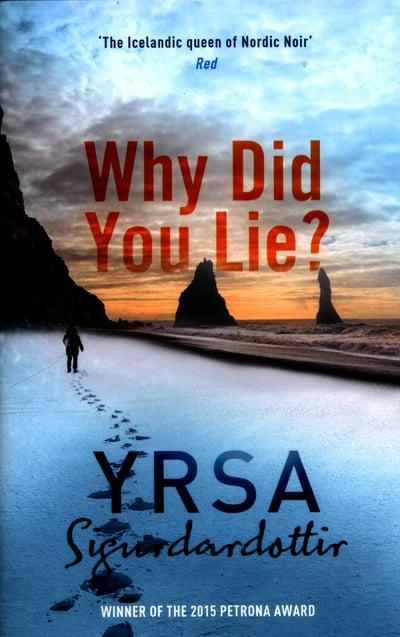 This is a standalone gem by the Icelandic "Queen of Crime Fiction", Yrsa Sigurdardottir, author of the critical acclaimed as well as commercially successful Thora Gudmunsdottir series. Yrsa is at the forefront of a generation of outstanding Icelandic crime writers, along with Arnaldur Indridason, Ragnar Jonasson, Lilja Sigurdardottir and so many others who are inspired by the wild Icelandic landscape which is a character in itself. For those who are not familiar with Sigurdardottir's body of work, it should be mentioned that another standalone book of hers, titled I Remember You, was adapted for the big screen under the same title in 2017 by Oskar Thor Axelsson, starring some of the most popular native thespians like Johannes Haukur Johannesson and Sara Dögg Ásgeirsdóttir. I've read all the novels written by Yrsa and she is one of my favorite Nordic crime/thriller writers as she is one of the few Scandinavian authors of the genre who succeeds in embedding the horror element in her work, always flirting with the supernatural, though never actually embracing it.

Why Did You Lie?is a complex story narrated in three nonconcurrent timelines. At the beginning of each chapter, the author states the date and you should be careful to notice when something is happening as it will help you to figure out the most crucial parts of the plot. The first plot-thread is about a police officer, Nina, whose husband recently attempted suicide only to find himself in a hospital bed in a vegetable state. The second involves a family of three, Noi, Tumi, and Vala, that swaps their house with an American couple and gets back home to discover that something very bad happened in their household while someone is lurking around outside having sinister intentions. The final plotline concerns a young photo-journalist, Helgi, who accepts to take part in a rather risky endeavor in an isolated place somewhere deep in the country, along with three others, two men and one woman. Those three plotlines seem irrelevant one to another in the beginning, but as the plot evolves we gradually understand the way(s) with which they are interconnected. Sigurdardottir is a true master in plotting and proves it once again as she gives the reader the absolute minimum information to keep him turning the pages while building the suspense and horror feeling at a slow pace, reaching the climax in the last part where the truth and the culprit are revealed. The final explanation doesn't leave any -major- plot holes and, as it always happens in Sigurdardottir's books, the reader feels satisfied and not cheated by the finale.

What makes Why Did You Lie? to stand out from similar Nordic books is the terrific use of Icelandic landscape that becomes in the hands of the talented writer an exemplary setting for a thriller with a high dose of horror touches. Some parts of the book are especially creepy and many of you will want to have all the lights open in your house while reading it. I believe that this is the second most brilliant novel by Yrsa after I Remember You which is the best so far. Other Scandinavian writers should pay attention to how she builds her -often- labyrinthine plots and also to her ingenious sense of location. Though, I have to admit that her latest series, titled "Children's House", hadn't met my -high- expectations, I still think that Yrsa Sigurdardottir is on the top-5 of today's Nordic crime/thriller writers. This is also a very good novel to begin reading her work as it's not part of a series while it features the trademark characteristics that make her an -almost- unique phenomenon in this genre.

Why Did You Lie?