"All plots tend to move deathward. This is the nature of plots. Political plots, terrorist plots, lovers' plots, narrative plots, plots that are part of children's games. We edge nearer death every time we plot".

In 2020, the Academy Award-nominated director and screenwriter of the acclaimed Marriage Story (2019), Noah Baumbach was prompted to re-read Don DeLillo's classic novel White Noise due to the outbreak of the Covid-19 pandemic that sent shockwaves across the globe and brought us all closer to the concept of our own mortality. Known for his works that entail extensive use of dialogue, as it was the case in his 2019 critically renowned cinematic examination on the consequences of the termination of a spousal relationship and its manipulation by the professional vultures, the divorce lawyers, who prey on the depleted links between the two exes for their own profit, Baumbach had to overcome himself as a director as he chose to bring on screen a book that has been labelled as "unadaptable" and "unfilmable" since its publication in 1985. The reasons that made a movie adaptation so challenging and demanding have mainly to do with DeLillo's selection of complex main themes including -first and foremost- the everlasting human fear of death, consumer culture and its effects, technology, the inadequacy of language and the distortion that it causes in the perception of an objective world and several more that crop up in the course of the story that is ultimately about the survival of the contemporary man in the postmodern world and the repercussions of the existential agony causing the fear and trembling experienced by each one of us as we are facing the possibility of our own demise. Furthermore, DeLillo's novel is heavily dialogue-based and the distinctive sentence structure of the featured interactions adds another problem to the mix for those who aspire a visual interpretation of the American literary giant's text.

Baumbach remains faithful to the original source, perhaps too faithful as he opts to transcribe DeLillo's words verbatim from page on screen, and retains the story's division into three main parts ("Waves and Radiation", "The Airborne Toxic Event", "Dylarama"), each marked by a different narrative tone, something that makes the film's cohesion all the more elusive for Baumbach who makes a bold step, the most audacious in his career so far, diving into the mindset of a pioneer author, drafting himself the screenplay as he usually does in his films. He additionally had the luck to become involved in a film of high budget, providing him with the necessary tools to deliver a visually stunning picture with the credit belonging to the cinematographer, Lol Crawley, who captures the mundane quotidian urban setting within which the protagonist, University Professor Jack Gladney, and the main characters operate as well as finds the most fitting way to translate the novel's narrative voice into the visual language through the dominant use of darkness vs. light, a stark contrast that the audience cannot overlook. Moreover, Danny Elfman's work regarding the film's musical score is exemplary and its brilliance is revered by Brian Tallerico in his review of White Noise, published on the rogerebert.com website on December 29, 2022. Tallerico writes: "(Elfman's) score is one of the best of the year, connecting the three tonally different sections" (for the full review click here), thus aiding the story's interrelatedness, strengthening the loose narrative bonds of the fragmented narrative as existing in the novel.

The film is set in an unnamed American college town where the protagonist, Jack Gladney, a professor of Hitler Studies in the local University lives along with his wife, Babette (Greta Gerwig) and their four children, each one of them bearing a personality as different as cranberry sauce and pumpkin pie. In the first part of the movie, we follow Jack's humdrum everyday reality that includes often visits to the supermarket and superficial interactions with fellow professor Murrray Siskind (Don Cheadle) who strives to establish a new department in the University centered on the musical legend Elvis Presley in the same way that Jack has created one about Hitler. The Gladney family's dreary existence is upended when a railroad accident lets loose a dangerous chemical substance called Nyodene Derivative, causing a wave of panic to the town's denizens. What ensues is the evacuation of the town, and we watch as the family drives towards the unknown, unmoored from both their home and the illusion of security, so indispensable for them in order to retain a normal life. The third and final part is focused on an experimental drug, called "Dylar", aiming to alleviate the fear of death. Babette is secretly and unlawfully taking the unauthorized pharmaceutical as she confesses to Jack in the scene that commences the film's conclusion. Her memory lapses and her difficulty in distinguish words from things are some of Dylar's side effects that plague Jack's wife and make her family suspicious during the first two chapters. From then on, Jack will embark on a mission to find the doctor who supplied his wife with Dylar and settle the score once and for all.

In Don DeLillo's fictional universe, language, rather than being the essential tool for human communication, becomes the prime source of distortion of reality and its main function is none else than to provide humans with the paramount distraction from the issues that we so much need to ignore in order to survive, even if they are crucial to the human condition. Language has obtained an absurdist quality which manifests itself in the trite everyday interactions that cover the larger part of the movie's first part. As Ally Ham effectively puts it in her review on thereviewgeek.com website (you can find it here): "One distraction, and the horrors of this world become only white noise in the background, washed up by the bright colors of consumerism". Human identity itself has been closely connected to shopping and this is a reality that DeLillo severely cauterized in his novel, discerning the roaring wave of commercialism that would envelop the world in the decades that followed the publication of his book. The "consume or die" mentality is reflected in Jack's inclination to shop even if it is for the sole reason to feel more empowered as a person. The world of mass media is another institution that obscures meaning through the overflowing of information, a problem that would only become vastly relevant in our times. The transmitted signs and codes have become an independent authority molding our perception of the world and the challenge now is one: how to keep yourself abreast with what's true and discard the tons of intermingled trivial and irrelevant messages which only serve to disorient us from what it's essential.

Even from Jack's first words in the movie, we get a glimpse into the state of existential staleness in which he lives. He says: "Let's enjoy these aimless days while we can", making it explicit to the audience that the void created by the lack of a meaningful existence is not only imposed by external factors, but also desired by the man himself. Modern human beings find solace in imitating the customs and behavior of the others, the mere repetition being enough for us to feel protected from the ills of the world in a special form of crowd catharsis that is prominent in today's Western societies. White Noise is a film that wants to talk about the individual as much as the community as a whole with each societal structural unity having its own peculiarities. Adam Driver proves, once again, his versatility and adapting skills as an actor, delivering an extraordinary portrait of Jack, a man who was created in the DeLillo's mind as a symbol, representing the average man inhabiting the contemporary world, having to face all of its malfunctions and glitches. Don Cheadle is equally compelling in the role of blabbermouth Murray, a significant character in the story, while Greta Gerwig is convincing and effectively communicates Babette's torment created by the burden of untold secrets while her subsequent breakdown comes across as genuine. White Noise is Noah Baumbach's most ambitious endeavor so far and deserves your attention and respect. The film will cause the same effect both to those who have read and those who have not read DeLillo's classic as it is a highly loyal adaptation. In my opinion, the director's daring experiment can be safely deemed successful. 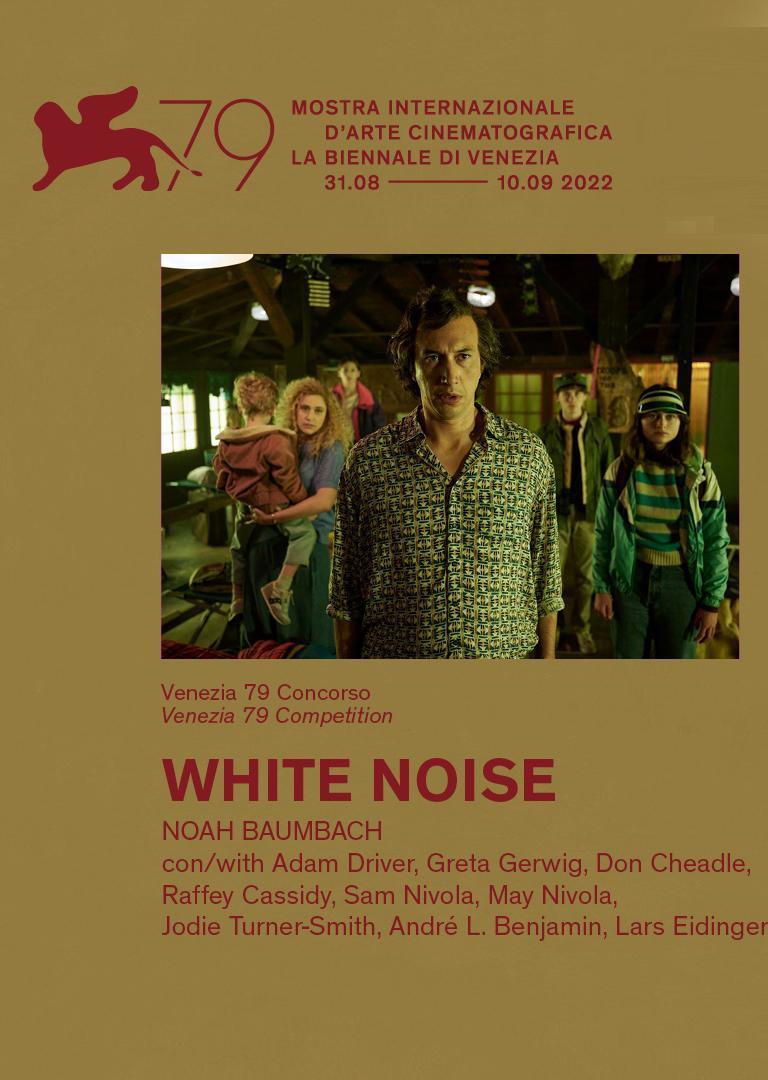