We Know You Remember 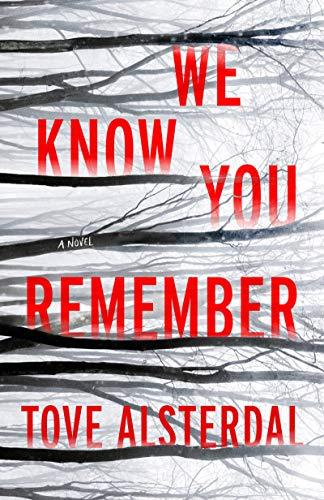 This is the first installment in a new series by Tove Alsterdal, the Malmö-based ex-journalist who burst upon the Swedish crime fiction scene with her 2009 novel, The Forgotten Dead. Even though Alsterdal is one of the lesser known Nordic crime writers, her work is a highly original one as it contains elements from different genres ranging from the classic police procedural to the psychological thriller, always putting the emphasis on the sufficient development of the characters and the solid plotlines. We Know You Remember won the Best Swedish Crime Novel of the Year Award as well as the illustrious Glass Key Award for Best Nordic Crime Novel because of its sophisticated story and brilliant characterization that is reminiscent of the novels written by the giants of the genre.

The main protagonist is Eira Sjödin, a young police officer working in the Swedish countryside where the most puzzling police cases concern small-time misdemeanors and people live a quiet life. Eira has to deal with an array of family problems as her mother, Kerstin, suffers from the early stages of dementia, while her brother, Magnus, is a reckless drug addict who has long ago abandoned his family. Despite her lack of experience in major crimes, Eira will seize the chance to reveal new aspects of her personality as the investigation moves forward and she becomes drawn into a maze of lies and deceit attempting to solve both a present and a past case that took place over twenty years ago.

It all begins when Olof Hagström returns to his family house in a little village up north only to find his father, Sven, murdered in the bathtub. Panicked, Olof flees the scene only to be stopped by a neighbour who insists on calling the police. Olof has been for long the black sheep of the family because of his involvement in the disappearance, and possible murder of a local teenage girl, Lina. His obscure personal history soon makes him a target among the members of the small community who remember Lina's case and are not willing to forgive him. But as the investigation into Sven's murder begins, Eire and her colleagues will start to doubt Olof's guilt as there had been several omissions in the original inquiry.

There is a double mystery enveloping the book and the author plays with the reader's assumptions and preconceived notions about where the story is going and who the real perpetrator is. Alsterdal knows how to masterly mislead the reader, interspersing the text with false clues and red herrings, while the twists are so effective because they are inserted in the most fitting moments, altering the reader's perception theretofore and shocking him to the core. There are many instances when we are prompted to think that the case is solved only to be confuted in the remaining pages. The cold case is the most intriguing one as Olof seems to have been scapegoated by certain individuals to take the blame for Lina's fate.

The setting is alluring and the strong sense of place is one of Alsterdal's trademarks. Rural Sweden is a beautiful place, but underneath there is rot festering as the ostensibly relaxed inhabitants of Kramfors have a lot of skeletons in their closets, deeds that they struggle to forget and pretend to live a normal, happy life. The burden of secrets and their calamitous effect on the life of the community is one of the strongest themes featured in this novel. Furthermore Alsterdal offers an exemplary psychological study of her heroine who becomes likable, even though her behavior is sometimes evasive and seemingly incomprehensible, especially as far as her intimate relationships are concerned. The supporting characters are equally well-drawn and we will have the opportunity to meet them again in the second volume of the series.

The tempo is slow at the beginning, though it picks up after the first half of the book and becomes quicker and quicker as the story reaches its conclusion. The ending is appropriate and consistent to the mood and tone of the story, while the final resolution will leave you aghast. I've previously read just one of Alsterdal novels, note that there are not many English translations of her work yet, but the Swedish author has won a place in my heart because of her carefully crafted prose and natural, true to life characters. Her distinctive voice is worthy to be heard by an even larger readership. I hope that we will soon have the chance to read the next installment in this new "High Coast" saga in the near future. Fans of Swedish crime fiction will definitely want to add this one in their TBR list.

We Know You Remember