This is hands down, the best picture for 2015, a German production shot in real-time and in one continuous take (134 minutes). The director, Sebastian Schipper, does a terrific job in a truly challenging project and the result is bound to leave you breathless. The protagonist, the titular Victoria (Laia Costa), is a Spanish ex-pat now living in Berlin and the first scene of the film, we see her dancing in a nightclub where she is approached by a company of four local young men who seem to like her. Victoria will start flirting with one of them, Sonne (Frederick Lau) while wandering to the deserted roads of the German capital. Unfortunately, one person in the group, nicknamed Boxer (Franz Rogowski), has a shady past which dictates his present and he is forced to make a bank robbery that same night. Victoria will follow Sonne and Boxer in their dangerous endeavor and things will soon spiral out of control.

What makes Victoria a modern classic is its impeccable cinematography which leaves the audience stunned. In the first half of the movie we just witness the group of protagonists make small talk, walking on empty streets and smoking joints in an abandoned roof. There is nothing special happening as far as the plot is concerned, nevertheless, the viewer becomes better acquainted with the main characters during this first hour. The story begins to take shape after Boxer meets a middle-aged gangster who protected him during his past prison sentence. The crime boss will ask them to do the heist and after that point, everything seems to escalate at a rapid pace.

A special mention should be made about the film's wonderful soundtrack, composed mainly by Nils Frahm. There are short interludes in the story where we see the protagonists walk or dance with no dialogue and only the music, that harmonizes beautifully with the film's overall mood and character, can be heard. The intro club song (Dj Koze- Burn With Me) is also strong as dynamite, introducing the protagonist to the audience.

I have to dig very deep into my cinema recollections to find a movie shot in that particular manner and being as gripping as Victoria is. All film fanatics around the world, regardless of their preferences as far as the genre is concerned, will be delighted to watch such an astonishing picture. It is, without a doubt, worthy of a 10/10 rating. 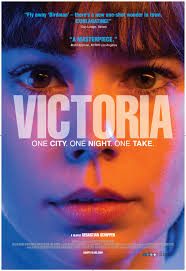