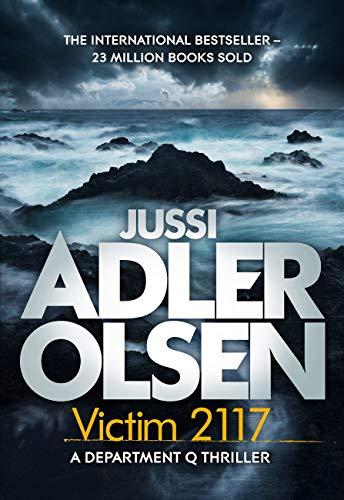 Let me begin by saying that I'm a huge fan of Jussi Adler-Olsen's "Department Q" series and I've read all the installments as well as seen all the movie adaptations starring Nikolaj Lie Kaas as Carl Mørck and Fares Fares as Assad. I enjoyed each and every one of them and I was thrilled to see that I was approved for a free ARC from the publisher (Quercus) through Netgalley. Unfortunately, Victim 2117 doesn't have the same effect on the reader as the previous books did and the ending left me with a bitter taste, trying to pinpoint the possible reasons that this installment is so out of synch with its predecessors in terms of both plot and characterization. All the readers love the Department Q team in the Copenhagen police force, a special investigative sector that reopens cold cases to examine possible errors and omissions in the original investigation, etc. Initially, the team consisted of Carl and Assad and then came Rose and Gordon to add their quirkiness and brilliance in solving impossible godforsaken cases from the past. All those characters have set their distinctive mark in the Nordic crime literature map of detective-protagonists and their sidekicks. In an interview he gave to Barry Forshaw (you can find it here), Jussi Adler-Olsen said that the series will be completed in ten installments and from #7 (The Scarred Woman) he focused on each main character separately as follows: #7 will be Rose's story, #8 will put Assad in the spotlight, #9 will revolve around Carl and his sense of guilt while the tenth and last one will be the "fireworks" completing one of the most brilliant Nordic noir crime novel series.

Thus, Victim 2117 is centered around the character of the mysterious and solemn Assad who always preferred to change the topic of discussion when asked about his past. From the first few pages of the novel, we learn that Assad's real name is Zaid al-Asadi and he was born in Iraq, not in Syria as he was claiming until now. His past is inextricably tied to Iraq, the notorious prison of Abu Ghraib, the resistance against Saddam Hussein's regime and the Danish Intelligence Services where he was employed some years after he settled permanently in Denmark. The reader also learns the reason why Assad seems to bear a deep unuttered sadness. His family, his wife Marwa and two daughters Nella and Ronia, are captives to a brutal sadist named Ghaalib, the main villain/antagonist in this book, who has a score to settle with Assad from many years before. The story begins when a boat with refugees from war-torn Syria reaches the shores of Cyprus and one woman is drowned in the process. Her photographs are all over the press and when Assad sees her face in the newspaper during a visit to Rose's apartment, he is shocked as he recognizes the woman who was a kind of guardian angel to him during his childhood. Then he will be even more dumbfounded when he realizes that the two women that stand beside the dead woman in the photograph are his long-lost wife and one of his daughters. Assad approached a nervous meltdown and he will be forced to confess to Carl, Rose, and Gordon the truth about his past in the Middle East and with their help he will attempt to find his arch-nemesis, Ghaalib, and rescue his family, or more accurately the remnants of his family.

This is the main story of the novel, but, as always in the "Department Q" novels there are plenty of subplots which in turn are interwoven with the central plotline. I found those subplots to be the weakest aspect of this novel. We follow the perspective of a young journalist working for a newspaper in Barcelona who searches for Ghaalib and investigates his connection with possible forthcoming attacks in Germany and other European countries. In another one we are introduced to Alexander, a truly grotesque and implausible character, who lives a secluded life in his house, never leaving his room and computer screen for any reason. Driven by his mental disease(s), Alexander hatches an insane plan that involves massive murder of random people with the use of a samurai sword (!). I found Alexander's story unbearable and obnoxious as the author simply wanted to add an extra character to richen the narrative or some other reason. The character's motivation is so farfetched and flimsy that makes you wonder why on earth such an experienced and talented crime writer as Adler-Olsen was determined to include that sub-story in one of his works.

I should also add that there is a nearly total absence of humor in Victim 2117, something that surprised me in a rather negative manner, as I was used to the classical camel jokes, the legendary similes and parables uttered by Assad and Carl's cynical and misanthropic comments and remarks. Perhaps this is due to Assad's tragic predicament in this book that doesn't leave space for a lighter tone. Furthermore, the author chooses not to use flashbacks that were a very common narrative trope in the previous installments. Instead, we follow multiple perspectives from both protagonists and antagonists/villains that unfold at the same time in the present day. I don't know what went so wrong with Victim 2117 and it is the first time that a book written by the Danish master of crime fiction lets me down. I hope that it will be nothing more than a parenthesis and the next one (#9) will be reminiscent of the series' overall excellence.

NOTE: The fans of Jussi Adler-Olsen's "Department Q" series should be already familiar with the cinema adaptations, in total four films: The Keeper of the Lost Causes, The Absent Ones, A Conspiracy of Faith, and Journal 64. Nikolaj Lie Kaas plays Carl and Fares Fares (Easy Money, The Nile Hilton Incident)is giving a splendid performance as Assad. As I write those lines, the fifth movie is filming, titled The Marco Effect (#5 in the series) with an entirely different cast. Ulrich Thomsen will succeed N. Lie Kaas in the role of the grumpy protagonist and Zaki Youssef will portray Assad. It is rumored that there are plans for the production of three more films after that, corresponding to the last three novels by Adler-Olsen.