Christian Bale in another Ovidian Transformation.

This is a semi-biographical film on the life and political career of the controversial ex-vice president of USA, during the G.W. Bush administration, Dick Cheney. Vice begins with the role of Cheney in the Nixon's presidency years and his upgrade to White House Chief of Staff (1975-1977) after the Watergate scandal. The director, Adam McKay, focuses on Cheney's close relationship with Donald Rumsfeld who was a friend of his and kind of a political mentor, and the significant relationship between Cheney and his wife, Lynne (Amy Adams). Later, Cheney would become The second half of the movie focuses on the years of Cheney's vice-presidency, during G.W. Bush's administration (2001-2009) and especially on crucial events of the contemporary American history, such as the 9/11 terrorist attacks and the subsequent anti-terrorist hysteria as well as the invasion of Iraq, in 2003.

The movie is fast-edited and attempts to cover long time-spans (nearly four decades) in just a few screenshots, and even though that works well for the most part, it sometimes gives the viewer a rushed feeling that makes him feel uncomfortable and prevents him from fully concentrating on the film's narrative flow. Cheney is outlined as a tough and cynic politician, with anti-democratic tendencies, who saw opportunities for the advancement of his political career even in the worst disasters. Nevertheless, Vice shows his vulnerable side as well, that revolves around his wife and daughters.

Christian Bale does, once again, an amazing job as he totally transforms into Dick Cheney with the help of an Oscar-winning makeup and hairstyling team. Bale "gained 45 pounds, shaved his head, bleached his eyebrows and exercised to thicken his neck for his role as Cheney" (IMDB Trivia) and proved that he is one of the best method actors of his generation. He even studied heart-attack prevention as Cheney has a history of heart-related diseases. Sam Rockwell in the role of G.W. Bush is great too in portraying the indecisive and easily manipulated George W. Bush.

If you are interested in biographies or in modern American political history, this is definitely a must-see film. But apart from that, Vice is worth watching purely because of the incredible performance by C. Bale. 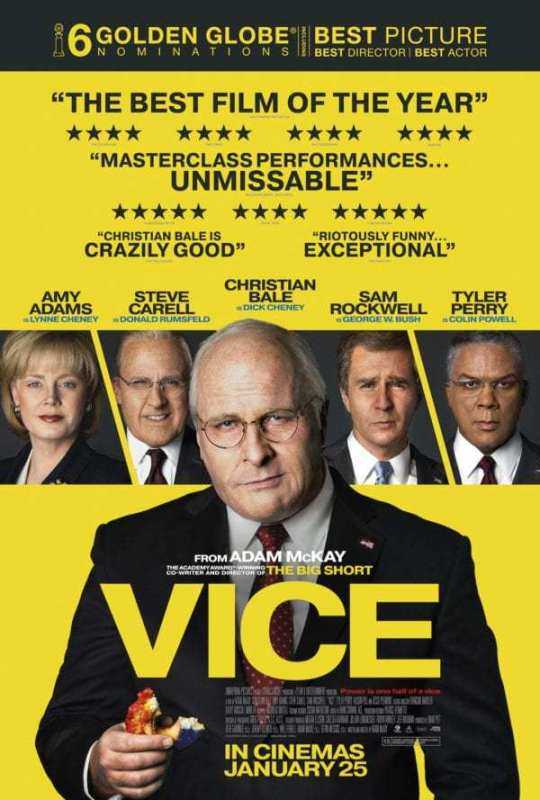