A harrowing depiction of real events.

United 93 is not an easy film to watch as it narrates the tragic events of 11/9/2001, the center of the story being the events which occurred to the flight of the title from Newark to San Francisco. The hijackers wanted to crash the plane in the White House in Washington but due to the heroic resistance from the passengers, they were forced to crash in a non-residential area, saving hundreds of lives.

The first half of the film depicts the confusion and bewilderment of the air traffic controllers and government officials during the beginning of the attack, while the second is focused solely on the titular flight, where four Islamist terrorists killed a passenger and the two pilots, gaining the control of the aircraft. Greengrass is a director who specializes in the dramatization of real events and, in my opinion, this is the best of his movies as it captures clearly the feelings of despair and anguish that the passengers endured during the hijacking.

I was not familiar with this incident and I was fascinated by the passengers' bold attempts to regain the control and land the plane safely. The fact that the viewer already knows the outcome adds to the tragic dimension of the story. The last ten minutes are difficult to watch and many viewers should be ready to be shocked.

This film has no main protagonist and the attention of the director is concentrated in the group of the passengers as a whole, while the portrayal of the terrorists is careful and measured. This film made me search more extensively about information regarding the 9/11 attacks and learn a lot of things that I ignored until now. Paul Greengrass is a director who guarantees high-quality standards in every aspect of film-making and this is his most successful work so far. 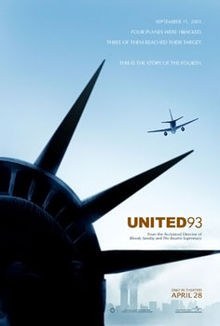