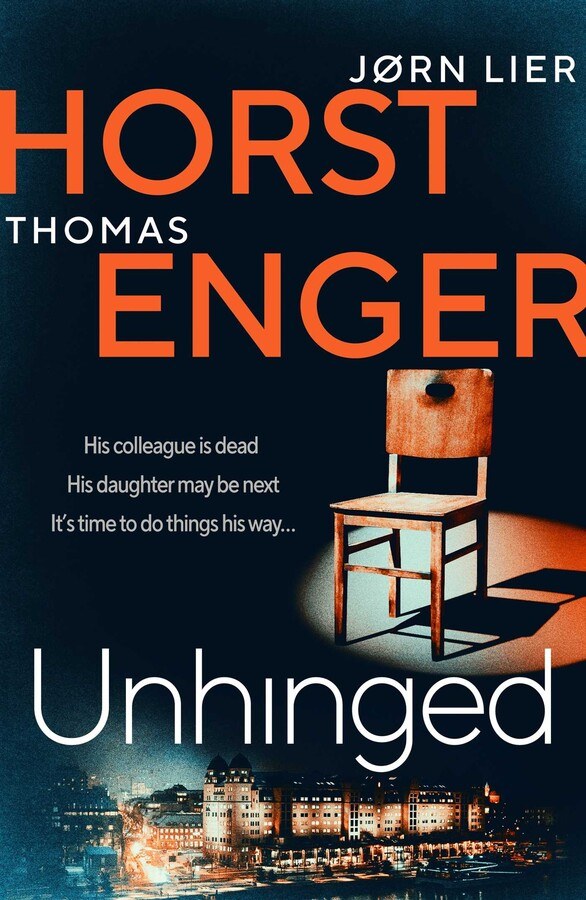 This is the third installment in the "Blix and Ramm" series written in collaboration by two of the most outstanding representatives of Norwegian crime fiction, Jorn Lier Horst and Thomas Enger. The former is primarily known for his Wisting series which had been adapted into the television, starring Sven Nordin as the protagonist. Enger is the man behind the brilliant Henning Jull series, comprising of five books in total and of several important standalones such as the excellent Inborn. There are several differences between the authors' writing styles and choice of themes so this collusion becomes all the more interesting as we have the opportunity to witness the merging of two distinct voices. Each author uses his past professional experience as the guide to create the two protagonists, Horst as an ex-police officer and Enger as a journalist, thus the characters feel authentic and true to life.

Unhinged is a bold endeavor that signifies the authors' successful attempt not to succumb to the cliches and conventions of the genre and they put Alexander Blix in a terrible predicament as he is forced to live every parent's worst nightmare when his daughter, Iselin, being in the wrong place at the wrong time finds herself in mortal danger. Blix's frantic struggle to help her covers the first part of the story while in the second we watch as the beloved protagonist crumbles under the weight of guilt and sorrow. It is rare for the authors of genre to put their protagonists through such an ordeal, nevertheless this audacious feature pays off as apart from the actual storyline, the reader can focus on the disturbed inner world of a man who lost everything and tries to cling to life by any means possible.

The story begins when Sofia Kovic, Homicide investigator and one of Blix's closest colleagues gets shot inside her apartment in Oslo where Iselin also resides when she is in town. The assailant attacks Iselin who manages to escape and contact her father who runs to help her. In order to find the perpetrator, the authorities initiate an investigation in Kovic's last cases and soon they realize that the secret to her murder lies in the connection between several, seemingly unrelated, cases that the victim examined during the last days of her life. Iselin, despite her will, becomes a witness to the tragic event and because of her fight with the attacker, she is considered to be a key person to the investigation. Blix and Emma try to stand by her until one day Iselin gets abducted in the middle of the day in the center of the town and the story picks up steam.

The book is divided into two, almost equal in terms of length, parts and in the first one Horst and Enger use an effective narrative trick, jumping back and forth in time and keeping the reader in constant vigilance as we watch the plot events unfold through Blix's and Emma's interrogation after the events that followed Kovic's murder while we also witness the characters' actions in real time. This switching leads to a quicker pace and the readers are thrown into the story from the first pages of the novel. The second part concerns the evolution and conclusion of the personal investigations conducted by Blix and Ramm and, of course, the final climax where the villain is revealed. Even though the first two books in the series, Death Deserved and Smoke Screen, were closer to the typical Nordic police procedural, Unhinged contains all the elements of a high-caliber thriller with a lot of action and emphasis on the psychological state of the protagonists.

I always enjoy Horst and Enger's fiction, but this time they deliver something different and for that reason only they are worthy of an applause. Blix and Ramm series could also be a perfect basis for a movie or a TV show and I hope that in the future Scandinavian producers will take a look in these wonderful novels. In my opinion, it is, hands down, the best book in the series so far and it will satisfy even the most demanding readers. It has a little bit of everything: action, drama, suspense, mystery, and a strong whodunit element. There are no painstaking descriptions of the tedious procedures of a police investigation as the inquiries are personal and the reader follows the separate attempts by Blix and Emma to solve the puzzle. In Unhinged, Alexander and Emma's relationship is tested to the limit and it would be interesting to watch where this story goes in the following chapters of the saga. To conclude, this is the ideal Christmas read and a superb present for your friends and family. I will eagerly wait the next December for the fourth volume to be published.