Trapped in a 10-part television series, created by Baltasar Kormakur, who also directed the first and the last episode of season 1, and casting some of the most popular Icelandic actors such as Olafur Darri Olafsson and Ingvar Eggert Sigurdsson. The series is shot in two of Iceland's northernmost little towns, Siglufjordur -well-known by Ragnar Jonasson's Dark Iceland book series- and Seyðisfjörður. The chilly setting adds to the claustrophobic sense that is ever-present on the show and the wild landscape effectively transmits the melancholic feeling of the story to the viewer. The first scene of the series is set in 2008, where a fire in a remote building outside the town, kills a young girl and injures another young man who is then believed to be guilty of the arson and sent to prison. This is a very significant scene for the rest of the plot which continues its unfolding seven years later (2015).

The protagonist, Andri, is a police officer of Seyðisfjörður, an isolated little community with a low population -the police precinct consists of only three people- where a mutilated body is found. At the same time, a ship from Denmark moors in the town's port and, initially, Andri thinks that the murder was committed by a passenger but soon realizes that the truth may be hidden inside the closed society of Seyðisfjörður and its residents. Soon, the body count rises and the nation's media demand answers, so a special investigating team from Reykjavik is sent to take over the case. The commander in chief of the Reykjavik group is an old colleague of Andri and their relationship is very tense and antagonistic, but in the end, it is Andri and his small team that solves the puzzle of the multiple homicides.

Trapped is a slow-burning mystery, and the viewer must be patient even if the first three or four episodes seem a bit confusing or tiresome. As the plot unfolds, the persistent viewer will appreciate the depth of both the storyline and the characters. The last 2 episodes are emotionally touching as the finale and the solution of the case has repercussions for Andri's personal and familial life as well. The emotional aspect is also emphasized by the compelling use of music (the opening theme is one of the best in Nordic tv series) which underscores the humane aspect of the storyline. In this show, there are no typical villains, at least not the kind that is predominant in most of American crime television series, but only human beings, deeply-flawed and traumatized who reach their breaking point and commit the crime(s).

Overall, I think that Trapped is one of the best Nordic Noir television exports in the last years and proves that Iceland, even though being a small country, has a lot of talented artists who contribute to the genre. Baltasar Kormakur is an auteur with great potential as it was proved in Myrin (2006) and Eiðurinn (2016). Yrsa Sigurdardottir, Arnaldur Indridason, Ragnar Jonasson are just a few of the many accomplished crime fiction authors who are also popular outside Scandinavia, in wider audiences across Europe.

Season 2 of Trapped aired on 26 December 2018 and I am eagerly expecting the English subtitled version to relive the great experience of the first cycle. If you still haven't watched it, do yourselves a favor and relish this great show. 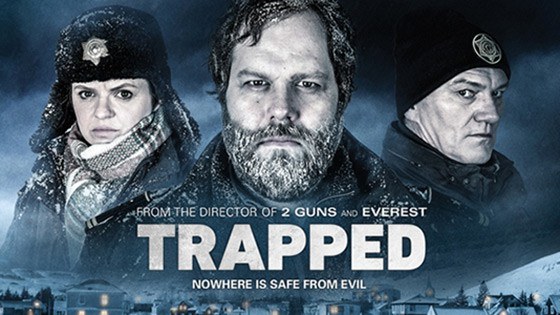