Not Kate Atkinson's best, but still well worth reading. 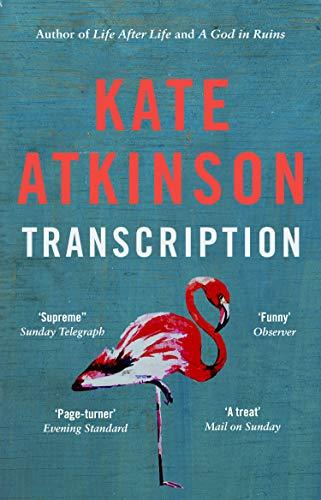 Kate Atkinson's authorship guarantees high literary quality and intricate plotlines that keep the reader glued to his seat. Transcription is no exception and in this novel, Atkinson proves that crime, or if you prefer more specifically, spy fiction can be elevated into quality literature if the writer is skilled and talented enough. The story is narrated in two timelines, one unfolding in 1950 (present) and the other a few months before the outbreak of World War 2 in 1940 (past). Our protagonist, Juliet Armstrong is recruited in MI5, the British intelligence service to spy on a group of English aristocrats who were sympathetic to the Nazi Regime, the so-called "fifth-columnists". Juliet's task is to transcribe in her typewriter whatever the group discusses in their -wired- apartment, thus preventing acts of sabotage.

In the 1950 timeline, Juliet is living in Manchester and works for the BBC as a radio producer. When she receives a threatening telegram from an unknown person that writes "You'll pay for what you did", she will have to mentally return to an era that is full of secrets and hidden truths. Juliet will suspect some of her old acquaintances, either fifth-columnists or even colleagues in MI5. The story is narrated in third-person, thus offering some distance from the protagonist's overwhelming thoughts and feelings. The reader roots for Juliet, even though it is hinted throughout the book that she has more than one skeletons in her closet. Atkinson's prose is of the highest standard with excellent use of description and vocabulary while plotwise she succeeds in maintaining the suspense levels steady throughout the book's 400 pages or so. I also ought to mention the great dialogue parts that offer many insights into the characters' inner spiritual and emotional world.

Personally, the only flaw I found to Transcription was that it was slightly uneven. While the first part recounting the pore-war years is thrilling and exciting, in the second one the story seems to drag a bit especially in its first 50-100 pages. But, of course, this is no reason to skip this fascinating spy novel, written by one of the most acclaimed and skilled literary crime writers today. If you are a fan of Tana French, Sophie Hannah, and Sarah Waters then Transcription is destined to capture you in its magic.