Three Uses of the Knife: On the Nature and Purpose of Drama

David Mamet's reflections on the essence of the dramatic art. 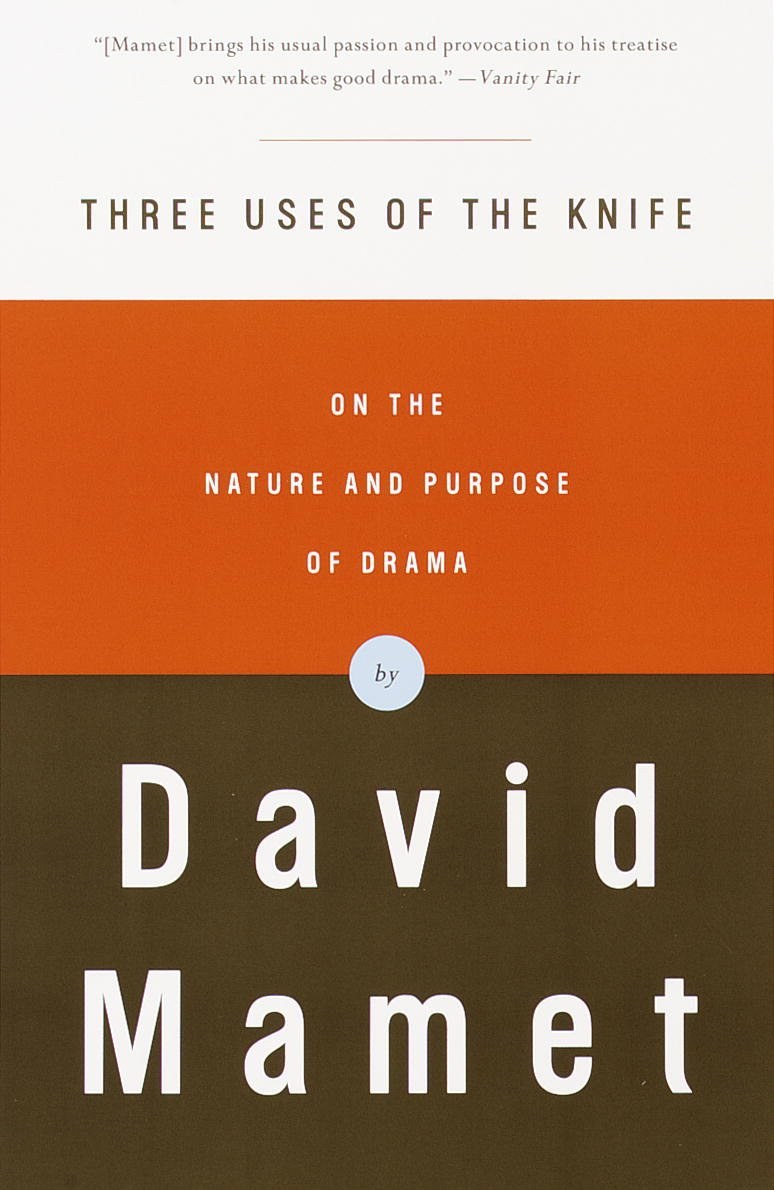 "After a while, the new is no longer new, and we require drama. It's how we perceive the world".

Pulitzer Prize-Winning author, filmmaker, and playwright David Mamet is highly esteemed in the world of both cinema and theater and his work as a screenwriter includes titles that won the profound respect of the audiences as well as flattering praises from the critics such as Glengarry Glen Ross, House of Games, Wag the Dog, and The Spanish Prisoner. In his little book Three Uses of a Knife, the American writer introduces his own theories regarding the dramatic art, its function and purpose, while not missing the chance to severely criticize today's level of entertainment as provided by the mass media and attacks television in which he sees the facilitator of the widespread intellectual hibernation dominating the younger generations. Mamet's musings and arguments are stated in a direct, borderline brusque, manner and he manages to contain his thoughts on the nature of drama in a booklet of under 100 pages, expressing himself in a highly succinct and concise way. He adopts a threefold division of his content and in each one of the three parts ("The Wind-Chill Factor", "Second-act Problems", "3 Uses of the Knife"), the author focuses on specifics aspects of the dramatic phenomenon which all merge together in the third and final chapter where the reader has the whole picture in front of him and can safely claim that he had thoroughly comprehended Mamet's line of thinking.

The book begins with a sentence which constitutes the quintessence of the message that the author fervently wishes to communicate through this work: "It is in our nature to dramatize" Mamet claims and proceeds to give some examples in which ordinary and impersonal phenomena such as the weather become dramatized by the use of certain dramatic tools such as exaggeration, ironic juxtaposition, inversion, and projection. For Mamet to dramatize an incident means "taking events and re-ordering them, elongating them, compressing them, so that we understand their personal meaning to us". He further defines dramatic as "having a plot, in order to understand its meaning for the hero, which is to say for ourselves". Mamet embraces an aesthetic worldview and regards life itself as drama with ourselves being the heroes. We are all living our individual dramas in our frantic search for meaning that would elevate our existence to the higher spheres of joy and play. Our main goal is none else than to give a specific shape to a chaotic universe, a semblance of order that would help to alleviate our feelings of helplessness and anomie, "the stuff of modern civilization". In our attempt to achieve that, we rationalize, objectify, and personalize the trite and the ordinary in a quest for understanding the mechanics of the vast cosmos. Mamet writes: In these small plays we make the general or the unremarkable particular and objective, i.e. part of a universe our own very formulation proclaims understandable. It's good dramaturgy". This need is embedded in the human being since time immemorial and art was born by this ancient desire to feel at one with the world.

The above arguments indicate an affinity between Mamet's perception of drama and the Nietzschean aesthetic theory and the distinction between the Apollonian and the Dionysian drives that gave birth to the Greek Tragedy. Apollo symbolizes the will for taxis, while Dionysus, the God of excess, epitomized the essence of the chaotic primordial ground that trembles underneath the calm surface. It was the friction caused by these two antithetical forces that resulted in the birth of the tragic nearly 2500 years earlier. Mamet asserts that tragedy, one of the highest forms of drama, is centered around the hero and his journey to overcome difficulties through the sheer power of his will and his unparalleled ability to resist: "The true drama, and especially the tragedy, calls for the hero to exercise will, to create, in front of us, on the stage, his or her own character". The main purpose of tragedy, which coincides with the objective of theater in general, is to elicit the feeling of awe to the audience who sees in the tragic hero, an image of his own self. But, Mamet stresses, in order for the audience to partake to the hero's journey, it is required that thre author undergoes the same trip. As the author caustically writes: "You can't sing the blues if you haven't had the blues". The relationship between the writer and his play is as close as it can get and we can't assess them as detached from one another. Apart from that, the tragedy, through the cleansing act relieves the man from the "burden of repression" that follows him everywhere from a very young age, by exposing him to life's most profound truths which is not necessarily convenient or appealing to the spectator.

Mamet highlights the notion that the art of drama is completely detached from the workings of reason and further argues that "the conscious mind cannot create art". The introduction of this fundamental dualism is followed by an account of the multiple ways that drama denies the interjection of logic in its form and content, and is solely intent on offering the audience pleasure and enjoyment, the primary goal of every dramatic art. The author also points out that the notion that theater's intention is to change the world is unfounded and completely ill-advised. Social change is by no means the theater's responsibility, thus Mamet declares that "drama doesn't need to affect people's behavior" while elsewhere claims that "dramatists who aim to change the world assume a moral superiority to the audience", something that drifts them away from the essence of the drama which is to offer delight to the audience. The author praises the English master of suspense, Alfred Hitchcock as he was one of the first to denounce the embracement of moralistic or political motifs in his films, thus, according to Mamet, proving that he has a clear understanding of the dramatic goal. The lack of moralization is what separates the activities governed by reason and the aesthetic works of art which are based on other human traits.

Moreover, we read about the distinction made by the author between proper plays ("good dramaturgy") and what he calls "Problem Plays" (bad dramaturgy"). The latter is defined as "a melodrama cleansed of invention" and evokes feelings of indignation rather than "anxiety undergone in safety" as it happens with pure melodrama. Those "false dramas" or "second-rate dramas" found their way to the home of the contemporary human and, defying the structure and narrative voice as established in tragedy, boldly dared the public's perception of the art of drama and very quickly became the dominant medium that shapes the everyday livelihood of modern man. Television is a direct symptom of the emergence of what Mamet calls the "Information Age", an era in which "we create and accept ignorance and illiteracy in the name of information". The author continues with derogatory remarks on television and the low entertainment that has replaced the living art of drama. He writes that television prompted people to cling to a state of "lobotomized immobility" and also talks about the "self-administering anesthesia" in the dark ages of information dominance. For Mamet, the relationship between true art and information can be illustrated in the visualization of this image: "We will not encounter art in information any more than we will find love in the arms of a prostitute". I found Mamet's observation to be on the pessimistic side and I realized that the American versatile artist deeply resents the contemporary human condition.

Overall, I found Mamet's Three Uses of the Knife to be an invaluable asset for theater and drama scholars as well as all those keen on learning more for the subject through a rather philosophical approach. Mamet's perception of life as drama is exhilarating as it made me return to my years as a postgraduate student of philosophy and the aestheticism of Friedrich Nietzsche. I also have to stress that Mamet writes in a crystal-clear style, his arguments are plausible and easily understandable, even if the vocabulary seemed a little advanced for me, a non-native English speaker. Even though, I have watched several of his films and I have admired his fabulous job both as a writer and a director, I've only read one of his books so far, this was only the second, Faustus, an audacious reimagining of the classic myth that left me gaping with its tremendous dialogues and extravagant writing style. I will make sure that I study in depth his writings and soon, I will further delve into his thinking process as imprinted on page. Literary scholars do yourselves a favor and read this book as soon as possible!

Three Uses of the Knife

On the Nature and Purpose of Drama