The perfect combination of murder mystery and legal thriller. 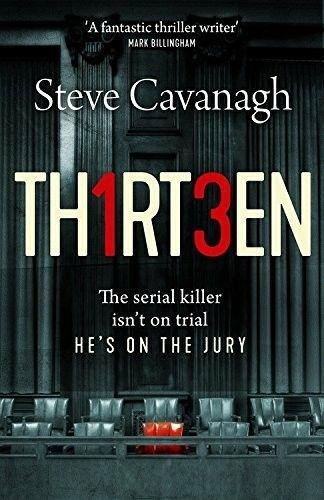 Thirteen is one of those rare novels that live up to the hype created by both critics and readers. This was also the first book written by the Irish author Steve Cavanagh and I proceeded to read the book with caution, but any reservations I had vanished after reading the first 40-50 pages of the novel. The story unfolds at a fast pace and its not-too-short and not-too-long length guarantees the total absence of verbalism and unnecessary descriptive parts that have nothing to do with the central plotline. As a result, the reader never gets bored and you will find yourselves turning the pages in a frenetic pace in order to see what happens next.

Eddie Flynn is an ex-grifter and currently successful attorney who takes on the case of possible murder by a famous young actor, Robert Solomon who is charged with double homicide, his wife and head of security. The case seems impossible at first sight due to the vast amount of evidence against his client but Flynn is a remarkable lawyer who will do his best in order to acquit the young thespian. The trial itself, which begins at the middle of the book, ends up being a battle of wits between Flynn and the real perpetrator who is sitting on the jury. Steve Cavanagh has studied law and he is currently a legal practitioner, specializing in civil rights law and his professional experience helps to create a genuine trial atmosphere. The dialogue between lawyers and law enforcement agents sounds more truthful as it is based on those happening in real life.

The story is narrated by two points of view, Flynn's and the real killer's, which adds to the overall tension as the trial is coming to an end and the revelation of the true guilty party gets closer. It should be noted that there is a critique of the American dream which is denounced by the perpetrator as "the great American lie" and even acts as a motivation for his gruesome acts. Such social commentary is more than welcomed when it is placed in the right time, at the right place and S. Cavanagh inserts his critique in a masterful and subtle way.

Of course, there are many twists -from beginning to end- in the novel's rich plot and don't be surprised if you find yourselves finishing the book even in one sitting. If you still haven't read it, you better do yourselves a favor and delve into this perfect example of blending a murder mystery, a serial-killer hunt, and a legal thriller.

I want to thank Netgalley and the publisher for providing a free ARC of this title.