The Woman on the Pier 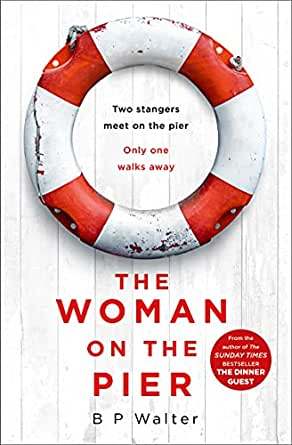 B.P. Walter's experiments with form and structure resulted previously in the brilliant The Dinner Guest, an innovative thriller that stood out mainly because of the exceptional handling of the multiple perspective and timeline narrative. In The Woman on the Pier, the English author follows the same recipe and delivers a compelling text consisting of a story about bereavement set against a backdrop of terrorist attacks and horrid child abuse that unravels through several points of view and manifold timelines. The themes are highly disturbing, but the mystery and suspense that permeates the book keep the reader turning the pages until the final showdown.

The main characters are all broken in various ways either due to a troubled family history or chronically suffered abuse and their actions are dictated by their fears and insecurities. Caroline, Michael, and Evan are swirling around in a dance of destruction for which they bear no responsibility while they are caught in the midst of a fatal game of revenge initiated by a random terror attack in the center of London. Caroline's obsession to put the blame on somebody for her daughter's death sets the trigger for the plot to unfold and the reader witnesses first hand the repercussions of her choices.

Caroline Byrne is a successful screenwriter who lives along with her husband, Alec, and teenage daughter, Jessica in Kent. Their quiet lifestyle is violently disrupted when Jessica is killed during a senseless act of violence at Stratford train station by armed terrorists. The puzzling thing is that Jessica wasn't supposed to be near Stratford at the time as she has told her parents that she was going to travel to Somerset in order to meet and stay with a friend from school. This fact makes the process of bereavement even more unbearable for the couple.

Fighting to overcome her enormous grief, Caroline will stumble upon a startling discovery when she checks Jessica's phone where she finds a string of messages by an unknown boy called Michael. It seems that Jessica had arranged to meet Michael in the station and he stood her up. From then on, Caroline will swear to find Michael and make him painfully aware of his involvement in Jessica's murder. For her, Michael is the sole responsible for her daughter's fate and he has to pay in more ways than one.

Walter delivers a masterclass on mixed timeline narration and the story jumps back and forth in time in a tempo that could become overwhelming for the reader if the author was less skillful. Nevertheless, there is not a single moment of confusion as we take glimpses into Caroline's past and comprehend her character traits that dominate her overall behavior. We also follow Michael's perspective and we become appalled by the the cruel fate he and his brother had to endure during their early childhood.

Although the protagonists are less than likeable, perhaps because their portrayal is genuine and brazen, the readers get to sympathize with them as we can at least identify with some of their inner thoughts and spontaneous acts. There are many plot twists and moments where the rug is pulled out from under our feet, challenging our perception of the story theretofore and the finale is both unpredictable and heart-wrenching. If you enjoyed The Dinner Guest, then this is the next hot thing and you should check it out immediately.

The Woman on the Pier