God save the Queen of crime! 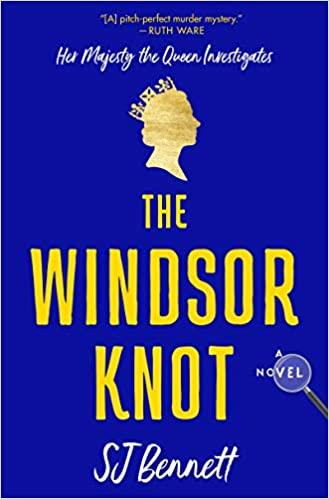 It's quite a change to read once in a while, a crime novel that begs to differ and has to offer plenty memorable moments and clever dialogue, even if the plot premise may initially seem a bit weird. S. J. Bennett's The Windsor Knot is the author's plunge into the fascinating world of crime/mystery fiction after writing several YA books with great success and in this first installment of "Her Majesty the Queen Investigates", she proves that she can deliver an ingenious story, featuring Queen Elizabeth II as the main protagonist. The Queen is presented as a cunning sleuth who has a knack for solving riddles involving murder and mayhem that even the country's Security Service has trouble dealing with. The book is a bold endeavor and even though at the beginning I felt a bit apprehensive regarding what the writer has to present, after finishing it I realized that it was one of the most innovative and original mystery novels that I've read for a long time. I literally can't wait to read the next volume, titled A Three Dog Problem: The Queen Investigates a Murder at Buckingham Palace and which will be published in 2021, though the exact publication date still remains unknown.

S. J. Bennett possesses extensive knowledge of the Royal Family's customs and practices including anecdotes and trivia that render her the most appropriate person to write that kind of story. We read as Her Majesty struggles to solve the case of the death of a young Russian man in the notorious Windsor Castle and at the same time we are witnessing the everyday reality in which she lives and her various interactions with her staff that allows illuminating her character and predisposition in great detail. The plot of the novel is intricate, there is a strong whodunit element at play and the reader will form his own theories as the story unfolds only to realize in the final pages that he got it totally wrong. The final explanation is complicated and gratifying, even though its sheer complexity may seem a bit too much to some. The author's language is subtle, though not extravagant, and her prose is reminiscent of some of the most prominent representatives of the Golden Age of Detective Fiction. In many ways, the story feels like an Agatha Christie tale with a murder being committed in the confined space of the castle, and the suspects are far too many for the reader to suspect the truth.

During a Dine and Sleep in the Windsor Castle, a young Russian pianist, Maxim Brodsky is found dead in his room wearing female undergarments and lipstick. In the beginning, the authorities seem to believe that it is an open and shut case of a tragic accident, suggesting auto-erotic asphyxiation as the cause of death. Nevertheless, as the crime scene is further examined, the police find evidence that points to possible foul play. The Queen is deeply uneased by the fact that a possible murder took place in her favorite place in the whole world and starts to conduct her own private investigation with the help of Rozie, her private assistant who is willing to do everything to satisfy her boss. As the plot unfolds, various theories are put on the table, some suggesting that the Russians had Brodsky killed because he was an anti-Putin activist, others that the killing is connected to the imperialist politics of China and so on. It is only in the end that all the pieces fall into place and every question finds its respective answer.

The Windsor Knot is a fin-to-read mystery and you can devour it in just one or two sittings as it's not a heavy book, it's under 300 pages, and one that will stick to your mind due to the quirkiness of the situations, the wittiness of the dialogue and the solid crime story that unravels. I found it through various readers' recommendations around the internet and I'm so glad I decided to give it a try. It's quite something to read about the Majesty herself delving into the murky world of international conspiracies and broken relationships, while maintaining her unique style and inherent goodness in her activities. There is also the opportunity for the reader to become more familiar with the Royal Family's etiquette, something that adds to the diversity and strength of the text. This is a novel that will greatly appeal to the fans of the classical English cozy mysteries, even though crime/mystery aficionados will also enjoy it a great deal. It is one of the books that I would recommend to everyone as it is funny, exciting, and gripping, a combination that is rare in the genre's latest works.

Her Majesty the Queen Investigates #1