A spectacular thriller by the master of the bizarre. 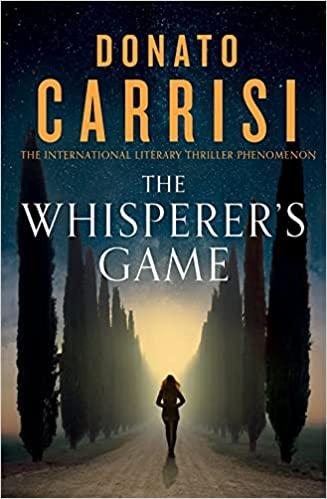 Donato Carrisi, the multi-talented Italian author, director, and screenwriter, is back for the latest volume in the Mila Vasquez series, a saga which began with the best-selling novel, The Whisperer. Carrisi's fictional universe is filled with bizarre phenomena and high caliber suspense that escalates slowly until the always surprising finale. Cinema audiences had the chance to watch two of his directorial attempts in the superb The Girl in the Fog, starring Toni Servillo and Jean Reno, and the visually impressive, though confusing in terms of plot, Into the Labyrinth. Both movies became immensely popular and the theories about what truly happened in the end still circulate around the various movie forums in the web. Carrisi's masterful directing and the exceptional performances by the protagonists mesmerized the viewers and gave prominence to the grotesque aspect of the films that is the Italian author's trademark.

Carrisi's novels follow the same recipe and in The Whisperer's Game, the readers have the chance to relish a potent thriller with dashes of horror and even some paranormal occurrences. The book is based on its coherent plot structure and strong characters who delve into a nightmarish scenario when an abhorrent villain decides to play a game that involves Mila, a woman who a long time ago left the police force and the missing persons department in order to move away in the countryside along with her little daughter. Mila's return to action signifies the breaking of the oath she took to retire and never look back to her previous life. Her pathological lack of empathy, a condition medically described as alexithymia, is both her blessing and curse as while it helped her to be a successful professional, it also condemned her to a life in which she has to cut herself in order to gain an insight into other people's pain.

The story begins when the police take a distress call from a mother of two who tells her interlocutor that a stranger is at her front porch and is looking straight into their house. Her husband left the home in order to talk to the invader and convince him to leave, but the intruder seems oblivious to his bickering. When the police arrive to the house, they find a scene that resembles a bloodbath and the four family members are gone, presumably dead, murdered by an unknown assailant. Though it is clear that the family was executed, the bodies are nowhere to be found and the authorities have no leads as to the identity of the strange visitor who is the most likely culprit. Due to an anonymous tip, they make an arrest of an obnoxious man, nicknamed Enigma, filled with tattoos of numbers all over his body who refuses to talk to anyone. Among the numbers tattooed in his skin, there is also a name: that of Mila's.

Thus, our protagonist is drawn to the case even though she swore a long of time ago that she wouldn't implicate herself in an active investigation ever again. Her former colleagues are distrustful as they consider her long gone and a person who is already retired. Nevertheless, her input is valued by the chief of the operations as Mila used to be one of the most intuitive and effective missing persons investigators. Enigma's attempt to implicate her in the case will prove to be a mystery within a mystery as the plot unfolds and Mila gets deeper and deeper into an investigation that involves past unsolved cases, an obsolete virtual reality videogame through which criminals practice their future atrocities, and, above all, the secret that connects Mila with Enigma and the reason behind Enigma's persistence to involve her in this eerie situation. Mila is mainly working alone, though she allows one of her closest ex-colleagues to help her in some difficult occasions.

The book doesn't beat about the bush and from page one, the reader gets immersed in the story as Carrisi wastes no time in superfluous descriptions or inconsequential dialogue and introduces us to the hellish event of the killing of a whole family. This initial situation acts as the instigator of the story which unravels in fast tempo, always offering to the reader something new to mull over. There are several different plot strands held together by a unifying theme that never gets overshadowed by any of the various sub-plots. The Whisperer's Game is a novel that demands the readers' full attention as there are lot of details and fine points that could make a huge difference to the correct interpretation of the story. Some may find the plot a bit convoluted as the author keeps feeding the reader with information about past cases, but the truth is that everything makes sense in the end and nothing is redundant.

Overall, I would say that this is a highly entertaining thriller bearing the signature of one of the most particular contemporary Italian crime authors. If you are not familiar with the previous installments of the series, no worries as Carrisi is careful enough to divulge the necessary clues about the main characters from the beginning. I am one of those who haven't read anything by Donato Carrisi so far and my first impression of his work is more than positive as he delivers a distinctive novel, reminiscent of his movies, especially the much-discussed Into the Labyrinth. I like his style and there are no other authors that I can think of who write in a similar manner. He has a fine grasp of the freakish and the extraordinary and he manages to incorporate those elements in a mix of thriller and horror fiction that grounds the reader. I would urge you to also watch his movies as they will help you to form an initial picture of his narrative style and choice of themes. I want to thank Netgalley and the publisher for providing a free ARC of this title.