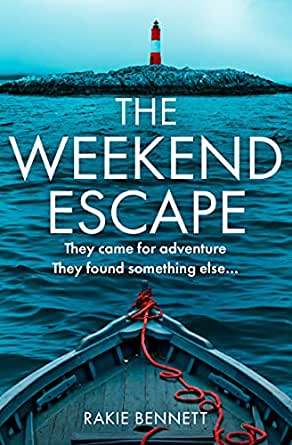 Agatha Christie's classic, Ten Little Indians has to be one of the most influential novels ever written as it gave birth to one of the most prominent staples of the mystery genre, the locked-room-mystery tale. From its publication onwards, there has been a vast number of authors who adopted the same plot premise in order to develop their own stories of murder and mayhem taking place in a confined space. The sad truth is that only few of them succeeded in re-creating the haunting atmosphere of the original while the majority remained in shallow waters simply copycatting some of the tropes that deemed Christie's book as a masterpiece.

The Weekend Escape, Rakie Bennett's debut novel, falls in the latter category as it feels that the author has compiled an array of cliches in her attempt to form a nail-biting story which is supposed to keep the reader on edge, guessing and speculating about the possible culprit and their motivation. The book fails to score points in almost every crucial aspect such as suspense building, characterization, and plot intricacy while the writing style per se is so simple that is reminiscent of an essay written by a first-grade student of English. The ending is horribly predictable even from the first 50 pages or so and the mystery is totally absent throughout the novel.

Lyndsey, Amanda, Val, Juliet, Sonia, and Bobbie are the main characters in the story, six high-school friends who reunite in order to rekindle their relationships that have been hibernating since their graduation from high school. Their weekend trip to the secluded Shell Island in the northwest of England involves a variety of outdoors activities like abseiling, rock climbing, and so on. But as they arrive to the island strange things begin to happen. Amanda gets injured during the abseiling from the local lighthouse tower and the group quickly discovers that the rope has been tampered with. With Amanda incapacitated and with a storm brewing on the outside, the six friends will begin to clash with each other as well-buried secrets come to the surface and threaten to disrupt their bonds.

Even though the Weekend Escape starts strong with the protagonist, Lyndsey, being in the hospital and interrogated by the police officers about the events in the island that led to the death of her friends, the novel quickly deteriorates to a tedious read as the first half features little action while the dialogues that are supposed to develop the characters seem artificial and pretentious. Perhaps it would be more interesting if the author chose to adopt a double timeline narrative and the reader had the chance to observe the group's relationship dynamics in the past while witnessing the change in their characters in the present. In any case, the novel's format doesn't allow the reader to appreciate the protagonists and correctly assess them.

I have to admit that I was extremely disappointed by the final result and in the end I couldn't help but think that I wasted my time on this one. There is a ton of similar novels out there that beg to differ but the lack of originality and craft renders them a mush that, sadly, dominates today's mystery genre. I truly hope that there are talented authors out there who have the necessary skills to create innovative stories, writing outside the box and respecting the readers. I want to thank Netgalley and the publisher for inviting me to read this title in exchange of an honest review.