A memorable historical fiction novel set in the years before the beginning of World War 2. 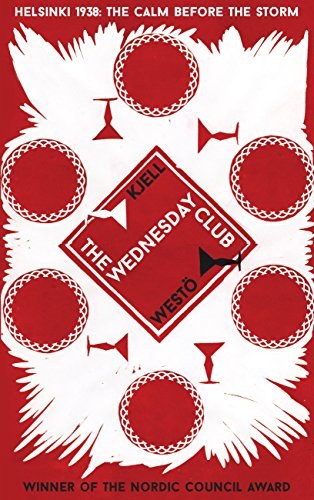 I've never read a book by Kjell Westö, to be completely honest I was unaware of his existence until now, and I decided to give The Wednesday Club a try when I saw that it won the Nordic Council Literature Prize (2014) which is one of the most acclaimed literary awards in Scandinavia. By finishing it, I was really happy that I made this decision as this is a remarkable novel, set in Helsinki the turbulent years before the outbreak of World War 2. There is a lot of accurate and well-researched dialogue between the main characters that reflect the concerns of the thoughtful Northern Europeans arising from the establishment of the dictatorships in both Germany and Russia as well as the rise of a series of brutal attacks on socially disadvantaged people and ethnic minorities.

The main protagonists are Thune, a middle-aged lawyer recently separated from his wife, Gabi, who now lives with a close friend of Thune's and a member of the titular Wednesday's Club, Robi Lindmark. The other main character is Matilda who carries a dark past connected with the Finnish Civil War (1918) that resulted in making her a kind of split-personality to survive. Matilda gets hired by Thune as his secretary in his office and she lives under the illusion that she has managed to erase her past and begin a new life. The Wednesday Club was founded by Thune and consists of four members plus Thune and Robi and the story kicks off when in one of the club's monthly meetings in Thure's office, Matilda will hear a voice that he recognizes from her worst nightmares. But Matilda is not the frightened little girl she was twenty years earlier, so she hatches a plan to exact her revenge from the man that abused her in the past.

What makes The Wednesday Club a truly fascinating read is not its elaborate over-complicated plot but the quality of the author's prose as well as the reenactment of an unstable era. The reader learns a lot about the socio-political situation in Europe when Nazis started to become aggressive and made their first attempts to expand their influence on the neighboring countries. The fear and apprehension that took hold of the majority of the more intelligent and educated Europeans are represented through several heated discussions between the members of this closed, tight group of people who nonetheless seem to disagree in many crucial matters as the war is approaching and everyone eventually has to pick sides. The sense of place and time is very strong in this novel and Westö does an excellent job in depicting everyday life in Finland's capital city in 1938. It should be noted that even though the author is Finnish, he writes his novels in the Swedish language and apart from the Nordic Council's Prize, he has also won the prestigious Finlandia Prize for his novel Där vi en gång gått.

If you are a fan of historical fiction and if you like crime stories with a heavy literary touch, then this book is bound to satisfy you. I will search for more novels by Westö, a name that should be more widely known to the many fans of Scandinavian -crime or literal or historical- fiction. So do yourselves a favor and buy directly this e-book, you won't regret it.