A great conclusion to a superb series. 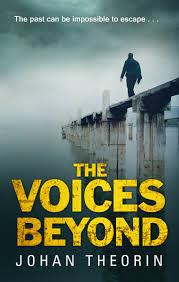 The Voices Beyond is the fourth and last chapter in the "Öland Quartet" Series written by the Swedish crime fiction author, Johan Theorin. In my opinion, this book is the best in the series and it should be noted that I hold all four novels in high regard. Each book is set in the beautiful Öland Island in the south of Sweden, the second largest island in the country, after Gotland, in the Baltic Sea. More specifically the main protagonist in all books is Gerlof Davidsson who lives in the small village of Stenvik somewhere in the South of the island. We, the readers, met Gerloff in the first book, titled Echoes from the Dead, as the father of Julia Davidsson a tragic mother who lost her son when he was only a little kid. Old Gerlof is the main character in The Voices Beyond, as he was also in the Echoes, and he tries to solve the mystery behind the story told to him by a confused teenager who claims that he saw zombies in the deck and a man with an ax chasing them. The teenager, Jonas, is the nephew of a local super-rich individual, Kent Kloss, who owns the majestic Ölandic Resort a massive hotel complex with campsites and even nightclubs in its posh interior. The Kloss has a lot of secrets and there is a man who came home to Öland from the New Country and seeks revenge from them.

Gerlof will witness the underground war between the Homecomer, as the author names him, and the Kloss Family from the beginning until its shattering climax. He attempts to find the truth about the possible reasons that the Homecomer has to destroy the whole Kloss tribe. In this quest, he will have to focus his memories on the 1930s when he, as a young boy, met the Homecomer. Furthermore, he will have to delve into the history of the Soviet Union in the 1930s, the years of the "Great Terror", that shaped the Homecomer's personality and temperament.

The plot is narrated by several different points of view, a trademark characteristic of all good Nordic Noir novels, a fact that gives the book a rather quick tempo, never becoming tedious or dull. There are two distinct timelines, the present and the past that begins from the 1930s somewhere in the Northernmost parts of the Soviet Union and continues along the next decades in Moscow. As always, the two timelines merge into one in the ending pages that are full of suspense and intrigue. I couldn't help but feel a bit blue after finishing The Voices Beyond as I was wondering if there will be some kind of sequel or furtherance to this great series. Johan Theorin is a name to remember as he is one of the top Scandinavian crime fiction authors today. My rating is 4,5/5.