The Sun Down Motel

One of the best crime/thriller novels of the year. 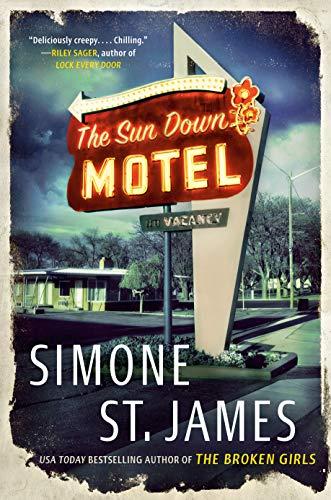 Simone St. James did it again. After the compelling thriller, The Broken Girls, one of the few books that truly lived up to the hype surrounding them, the American crime writer launches another winner, a novel that transcends genre categorization as it is a terrific blend of crime fiction, mystery, thriller, whodunit, with a few splashes of horror along the line. The Sun Down Motel is a title that catches the reader's eye as it features one of the best covers I've ever seen in the books of the genre. But, apart from that, this is a literally unputdownable novel that will keep you on the edge of your seat mainly due to its intricate, elaborate plotline and the masterful narration that unravels in a dual timeline, one thread in the past (1982) and another in the present (2017). In the first one, we follow the story of Viv Delaney, a young girl who is dreaming of becoming an actress and get away from her suffocating household and oppressive family. Viv sets off to New York but unforeseen circumstances force her to move to a small town near the Big Apple, the weird city of Fell. Viv will immediately search for a job and soon she finds one as a night clerk in a secluded motel, the Sun Down. Soon, our protagonist will begin to observe some really strange phenomena in the motel, like doors opening and closing on their own, sudden power outages, etc. The next step is even weirder as Viv starts seeing ghosts hanging around the motel. Feeling obliged to find out what is going on in her place of work, Viv launches her own private investigation and she unearths some pretty disturbing secrets concerning the town of Fell and the Sun Down. It seems that Fell is a place where young girls have been brutally raped and murdered in the near past and some of the victims are connected to the motel that Viv is currently working.

In the present timeline, we are witnessing the story of Carly, Viv's niece, who is plagued by the disappearance of her aunt more than three decades earlier. Inquisitive by nature, as her aunt was, Carly will travel to Fell to find out the truth behind Viv's disappearance. She will even find a job in the Sun Down, something that will help her with her inquiries. Carly will seek every possible contact with people who knew her aunt and perhaps have more information regarding her mysterious vanishing. But, she too will begin to experience supernatural phenomena in the motel, including the ghosts of a young woman and a little kid that had died on the premises of the motel a lot of years ago. Thus, Carly will follow Viv's footsteps and maybe she will have the chance to solve the riddle that puzzled the citizens of Fell when a series of gruesome homicides occurred several years back.

Apart from Viv and Carly, there are two other major characters in the Sun Down Motel. The first one is the motel itself which is a lively entity, reminiscent of Stephen King's horror novels. Simone St. James is a great author and the description of the motel is so compelling that the reader feels that he can touch, smell and feel everything that the main characters are experiencing in the book. The second one, is the town of Fell, a little city near New York that seems to hold so many grim secrets while its residents are generally untrustworthy as they lie a lot and in many cases, they mislead both Viv and Carly.

You should keep in mind that I'm generally very suspicious of thrillers that involve the supernatural element and I tend to steer clear of them. But to every rule, there is an exception and The Sun Down Motel proved to be one of the most absorbing, engrossing reading experiences of the year so far. If I had to rank the top-3 crime/thriller novels of 2020 then it would definitely be on the list and I now consider myself to be a hardcore fan of Simone St. James' work. You shouldn't miss this one, and especially those who like Stephen King's books will be thoroughly satisfied.

The Sun Down Motel