An accurate depiction of the infamous Norrmalmstorg robbery which gave birth to the term "Stockholm Syndrome".

We've all heard the term "Stockholm Syndrome" in various, academic or not, contexts, though few of us know the event which named this particular psychological phenomenon. On 23 August 1973, a violent robbery took place in Kreditbanken at Norrmalstorg square in Stockholm, that's the reason why this phenomenon was originally called "Norrmalmstorg syndrome" (Norrmalmstorgssyndromet). The perpetrator Jan-Erik Olsson, invaded the bank's premises with an automatic rifle in his hands, held four persons hostages and demanded three million dollars as well as the release of a prison inmate, named Clark Olofsson. Olsson knew Olofsson from his time in prison and considered him to be a close friend, more of a soulmate. The Swedish authorities decided to grant his wish, so Olofsson was transferred from the penitentiary he was held, in the bank where Olsson waited for him to share the ransom money and getaway. The four hostages, three women, and one man, all employees of the bank were held captive for five days in total (23-28 August) and ended with the two criminals surrendering to the Swedish Police.

The Stockholm Syndrome (original title: Norrmalmstorg) focuses on the interaction between Olsson and Olofsson on one hand and the reactions of the hostages to the escalation of the situation throughout these horrible five days. We also take a glimpse into the workings of authorities who attempted to de-escalate the hostage crisis through various means. The director of this documentary-like movie, Håkan Lindhé (The Inner Circle, Show Me Love), interjects snippets of footage featuring the official announcements from the police and psychologists made at the time, while there is also a short statement by the Prime Minister of Sweden, the later assassinated Olof Palme, who was kept informed about the crisis every step on the way.

Lindhé portrays in a humane and rather sympathetic manner the two protagonists and the audience witnesses many discussions made between the robber and the hostages. In that way, he attempts to shine Olsson's and Olofsson's characters under a different light, avoiding any harsh judgments and moral didacticism. Both Torkel Petersson and Shanti Roney deliver solid performances as the two thugs having a heart and a conscience while there are more well-known actors in the main roles such as Melinda Kinnaman, Göran Ragnerstam and Tova Magnusson. Overall, The Stockholm Syndrome is a noteworthy movie which is also severely underrated by both audience and critics, and if you are interested in psychology and more specifically to the "Stockholm Syndrome" which is defined as "a condition which causes hostages to develop a psychological alliance with their captors during captivity" (Jameson, 2010). It should also be mentioned that the building of the bank is an exact duplicate of the original.

ENDING NOTE: There is also Stockholm (2018), by Robert Budreau starring Ethan Hawke and Noomi Rapace, which is loosely based on the notorious 1973 robbery. 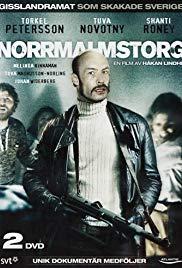