The Slippery Art of Book Reviewing

A small, concise handbook which proves to be fundamental for every book reviewer around the world. 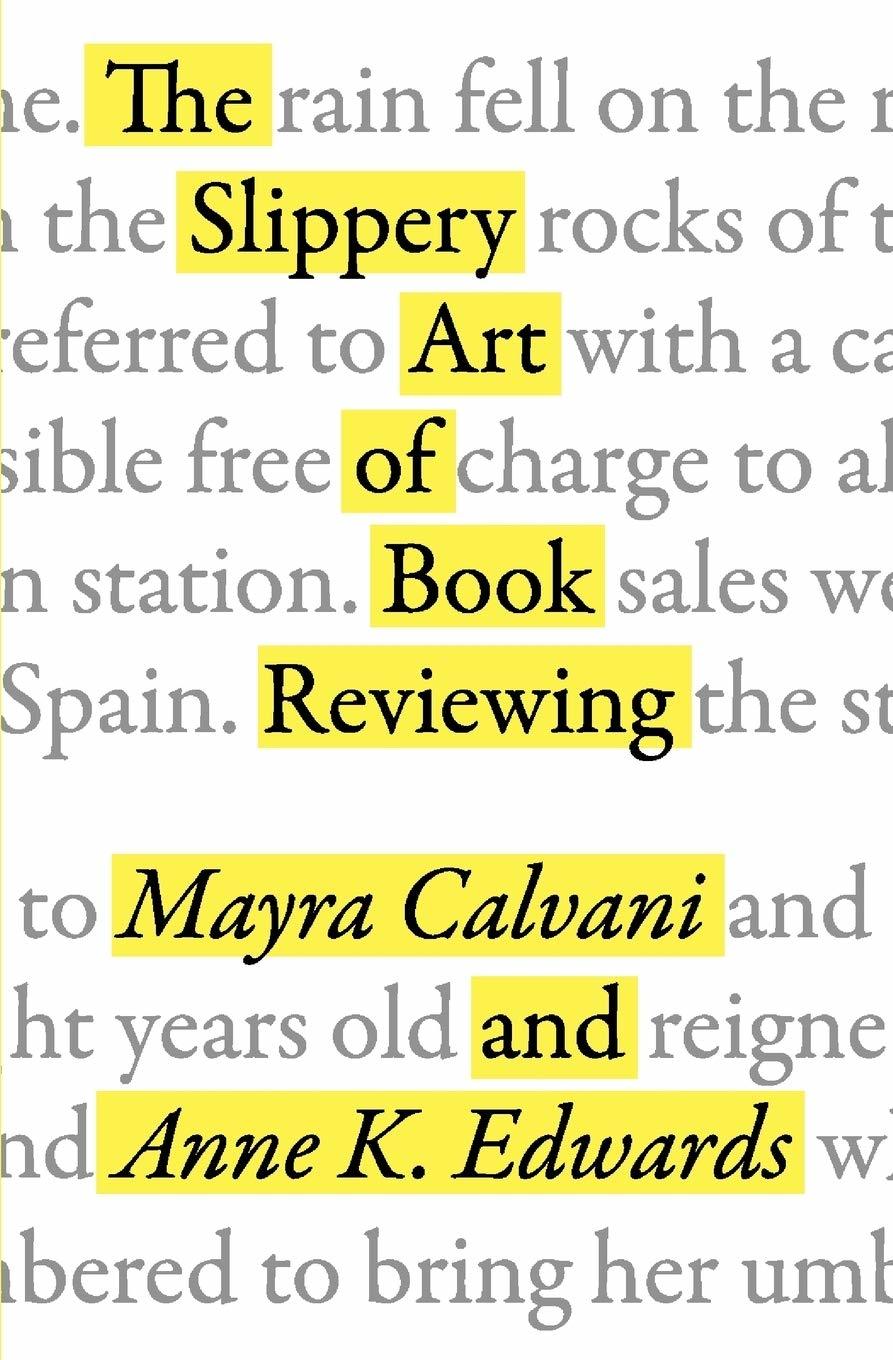 "The communion between reviewer and reader is based upon the presumption of the possible joys in reading and all our discriminations should curve towards that end". (John Updike)

"Book reviewing is an act of cultural hygiene". (Is Book Reviewing a Public Service or an Art? - The New York Times (nytimes.com))

It is an established fact that many -great- authors began their career composing book reviews of works written by both their contemporary and prior-living peers with the most illustrious example being Henry James, known for his classic novels The Portrait of a Lady and The Turn of the Screw, who retained the status of author while at the same time criticizing and assessing the works by authors of Emile Zola and Leo Tolstoy's stature, expressing his thoughts on various aspects of some of the most legendary texts of our literary history. A more recent example would be the Icelandic "King of Crime Fiction" Arnaldur Indridason who began his course by writing reviews in a Reykjavik newspaper, Morgunblaðið, and later continued to work as a freelance writer. However, book reviewing is not a topic that has been thoroughly explored in current literature, thus books such as The Slippery Art of Book Reviewing by Mayra Calvani, a Puerto Rican writer of both fiction and non-fiction books, and Anne K. Edwards, author of novels of various genres, are invaluable both to those who aspire to practice the art, or craft, or science, if you prefer, of book reviewing and to those who already review as a part of their professional vocation, for example journalists writing in larger or smaller media outlets, as well as those who put forward their critical pieces on their own websites/blogs/online magazines. So, whether you are an accredited book reviewer or an amateur, this little handbook will help you organize your thoughts on the subject and form a clearer picture of what is a book review, which are its intentions, the prerequisites for a book reviewer in order to write correct and enticing assessments, the rudimentary obligations of a reviewer and many other bigger or smaller advices and insights contained in the book's, dense in information, 200 pages.

The book includes a foreword by James A. Cox, a man who has been supervising and editing hundreds of reviewers in his time and a small preface by Mayra Calvani where she explains the book's objectives and provides a brief summary of its contents: "(This book) covers (...) not only the 'rules of the road' for reviewing books, but the reasoning behind those rules as well". Both authors, as becomes apparent even from checking the chapters' titles, yearn to offer a concise guide covering each and every aspect of the subject and they attempt to do so through presenting a large number of chapters, each covering only a handful of pages, where the respective topics are discussed briefly, nevertheless without the text ever losing its clarity and thoroughness. That is the major success for the duo of Calvani and Edwards as the book's structure could easily lead to a loosely coherent patchwork of a text that would utterly fail to convey the intended messages to the reader. Avoiding verbosity and over-analysis, the chapters flow smoothly engaging the attentive reader who should keep notes of the most significant of information disclosed in the book, so have a pen and a paper near you while reading The Slippery Art of Book Reviewing. Personally, I learned lots of new things concerning book reviewing, and reviewing in general I should add, thus I decided to upload this as-meta-as-it-gets review on my website. I wish I had spotted this book earlier as I would have avoided some cardinal sins and minor deficiencies in my own reviews so far.

Even before the first chapter, in her preface, Calvani introduces the book reviewer's obligations that relate to the authors, the publishers, and the readers. Any review is meant first and foremost for the readers, and it's not supposed to become a creative experiment for the reviewer whose duty is to criticize and properly assess a literary work according to some fixed standards and by employing cited and exampled reasoning. It may be true that writers often feel pressured to perform than to inform, but this tendency eventually alienates the reviewer from their true purpose due to an impulsive need to feed their ego with illusions of creative writing that overshadows the obligation of honest criticism. The fact that criticism is the main task of a reviewer, that doesn't mean that the review should lack entertaining aspects that would make them easier digestable by the reader. Honesty is an indispensable attribute for the book reviewer as the authors illustrate by writing that without honesty, a review "is little more than weak PR". And they are 100% right. That need for candor directly affects another much-observed flaw, or "disease" as Calvani and Edwards name it, the tendency for the reviewers to produce overly-positive reviews, sometimes overstepping and ending up writing mawkish elegies rather than down-to-earth evaluative articles aiming to assess both a book's strong points and its pitfalls. In the article titled "Book reviewing is an art, in its own way", published in www.theconversation.com, the author states: "A good review may be critical of aspects, or even the execution of the writing, but the only way a good review can be bad is if it is exaggerated in its praise". Today, there are many reviewing websites around the web that refuse to write negative reviews, setting a standard of a 3-star rating and above for a book in order to be made into a review. In my opinion, this is a grave mistake as it is within the reviewer's range of main tasks the objective and impartial judgement of a book's quality.

Thus, we move on to another cornerstone rule for every reviewer and that is the solid fact that they should endorse objectivity instead of subjectivity. It is unforgivable for a reviewer writer to let their own system of beliefs, prejudices and biases of any kind to interfere with their work. Objectivity is defined by the two female authors as "the deliberate ignoring of your personal biases and preferences in order to write an honest review based on all parts of a book- plot, writing, characterization, construction and so on". This is an imperative that the reviewer should always keep alive in their consciousness and guide their writing in terms of content. Yet there is a catch regarding the writing of negative reviews. The reviewer should always remain civil and show tactfulness when assessing the weak points of a book, a delicate little detail that would impede the reader to think that perhaps the reviewer has a hidden agenda or harbors feelings of resentment and hostility against a specific author, something that would irrevocably undermine the aforementioned necessity of objectivity. Being gentle and considerate in your judgements will add to your status as an independent critic and, besides, it is a form of customary law to be polite especially when dealing with the work created by people who are unknown to you. Calvani and Edwards include this issue in the 3 major problems that book reviewers face when writing: "Reviewers imposing their own egos upon their assessments of what they are reviewing; lacking an appropriate/consistent structure with respect to their workload; and failing to communicate effectively with the publishing community". A book review is considered to be an integral part of the cultural process and its links with the authors, readers, and publishers are inextricable.

Of course, before everything else, the reviewer ought to possess a solid command of language that can be divided into several distinct parts such as grammar, syntax, spelling, punctuation and so on. Then, the second desideratum is nothing else than clarity of thought, three words that conceal so much pain and strife for the majority of those who write for a living. It is a known fact that no one can be concentrated in the same way every time he sits down to write a review and there are even times when we struggle to scribble a just a few words and put them in order, feeling almost useless to the point of desperation. However, in the article published in www.theconversation.com, we read: "Good writing is often created out of struggle, doubt and feelings of ineptitude". This is certainly an optimistic approach at the problem of concentration and I, who have to cope with the problem each and every day for the last decade, should bear it in mind, especially during those godforsaken hours that I end up praying for some form of lucidity within my cerebrum. In the same article, I also found interesting this part: "The caliber of our cultural debates and conversations depend upon the hard work of writers, critics and editors who grapple everyday with the genuine difficulties of writing well and thinking clearly". More burning issues relating to the main subject are examined in the various chapters that constitute the whole of this delightful little handbook such as ethical matters pertaining book reviewing, numerous how-to chapters covering a wide range of topics, and also lists of print and online publications paying for reviews.

To conclude, I found The Slippery Art of Book Review to be a succinct, helpful guidebook that taught me a lot and even made me see book reviewing under a different light, at least regarding some aspects. Next in line is Philippa K. Chong's Inside the Critics' Circle: Book Reviewing in Uncertain Times, published in 2020 by Princeton University Press. I think that it will be the perfect supplementary read to this one, though, from what I saw during a brief glimpse, Chong's book is quite different both in structure and contents. Thus, another analytical meta-review is in order soon!

The Slippery Art of Book Reviewing