A character-oriented, slow-burning mystery from Germany.

The Silence (original title: Das Letzte Schweigen) is a crime movie featuring disturbing themes like pedophilia and child murder. It is directed by Baran bo Odar (Dark, Who Am I) and casts some of the top European actors like Wotan Wilke Möhring (Valkyrie, Antibodies) and the Danish Ulrich Thomsen (Festen, Brothers) as a pair of paedophiles, Peer and Timo, who rape and murder an eleven-year-old girl Pia, in 1986.

Then the narrative moves 23 years forward and in the present timeline, we meet again Timo who now has a family and seems to have a perfectly normal life. Timo's world will be shattered when a young girl is abducted from the exact spot that Pia was taken two decades earlier. He will attempt to come in contact with Peer after all those years and this is an encounter that Timo loathes as it will bring buried memories once again into the surface.

It should be stressed out that Timo is the main protagonist of the story while Peer has a secondary role and his screen time is significantly shorter. Wilke Möhring is, for one more time, excellent in his portrayal of a deeply disturbed and emotionally unstable character who descends into his own worst nightmare, unable to take matters into his own hands. The Silence is a movie based on its characters and the director focuses on their emotional state and the ways they cope with loss. The mystery dimension and the whodunit element are present though it's not what the film is truly about. This is not a classical Euro-crime flick based mainly on its intricate plot which unfolds at a rapid pace. Baran does Odar take his time in building his characters' profile and at the same time moves the story forward by depicting the police procedure for solving the crime.

The ending is really sad, though the most appropriate, in this dark, depressing story. There is no light at the end of the tunnel for Timo who will discover that the price for committing certain types of crime is way higher than he thought. This is a well-shot film and the majority of the shootings were done in daylight, thus creating a contrast with the overall gloominess of the story. If you can bear with its heavy themes, The Silence will satisfy you, keeping in mind what I wrote above about the nature of the film. 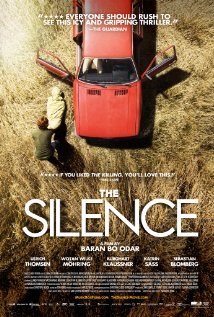