"A fancy car without an engine".

The above quote belongs to Stephen King, author of the titular novel and also one of the most acclaimed and prolific horror fiction writers around the globe at the present day. It is a fact that King didn't like Kubrick's take on the book, though he gave the director credit for the use of visuals within the film. Stanley Kubrick who wrote the movie's script, along with Diane Johnson, made a lot of changes in the story in order to adapt the book's mood and character to a movie script.

The main difference, I think, lies in Jack Torrance's characterization. In the book, Jack is portrayed as an essentially good person, despite his weaknesses and vices, who gradually delves into madness, being under the spell of the hotel's supernatural power. In the book, Jack is afraid of himself and in the end, he loses any human characteristic, he becomes a monster, embodying the hotel's evil spirit. In the movie though, Jack is outlined from the very beginning as a malevolent man who is constantly on the edge and ready to harm his own family.

I would like the movie to be much longer in order to incorporate those attributes that made King's novel a classic of the horror fiction genre. The characters needed more time to build-up properly. The last 30 minutes of the film seem to be a bit abrupt as we don't have the time to identify with the protagonists' emotions and state of mind. Of course, I know that it is pretty difficult to adapt such a lengthy novel to a cinema movie, but on the other hand, the core of The Shining consists of its strong, realistic characters and the focus should be on them.

Kubrick is a renowned auteur whose body of work leaves no room for challenging his artistic skills. Nevertheless, I don't think that The Shining can be numbered among his greatest works. It should also be noted that the actors, mainly Jack Nicholson and Shelly Duvall, both stated how hard the shooting of the movie was, as Kubrick -a notorious perfectionist- demanded many takes of every single scene, thus exhausting the two talented thespians.

If you've read and enjoyed the book it is essential to watch this, always keeping in mind that Kubrick's version is quite different from the original. Never mind any objections one may have about it, it remains a cornerstone film for the horror genre which manages even today, 40 years later, to send shivers down your spine. 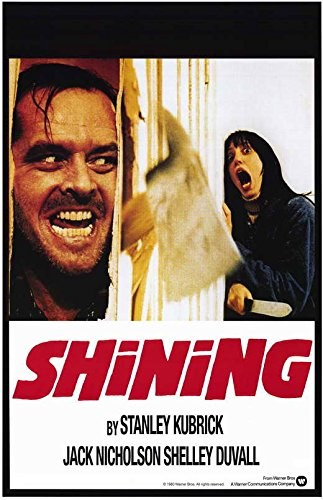