The -unsatisfying- penultimate installment in the notorious saga. 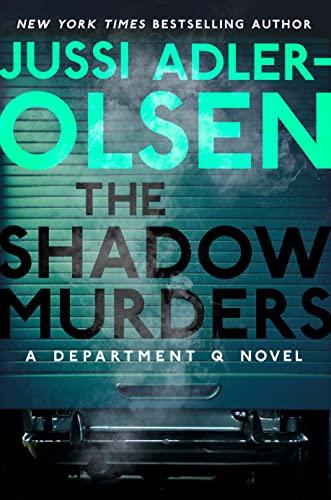 After the major disappointment of Victim 2117, the Department Q gang returns with the ninth and penultimate installment in the acclaimed series, written by Jussi Adler-Olsen. One of the cornerstones of Danish crime fiction, the series featuring a team of cops investigating "cold" cases, that is crimes that remain unsolved and lay shelved in the dusty archives of Copenhagen's police headquarters. Department Q series has become internationally recognized not least because of the film adaptations that involved some of the heavier names in Danish cinema. The protagonist, the unremarkable yet competent chief of the Department Carl Mørck, is one of the few Nordic fictional detectives who have been fortunate enough to be realized on screen by two well-known and respected Danish actors, Nikolaj Lie Kaas and Ulrich Thomsen. So far, there are five films corresponding to the first five volumes of the series and the directors, including auteurs such as Christoffer Boe, Mikkel Nørgaard, and Martin Zandvliet, have respected the texts, delivering capturing crime/thrillers with gloomy atmosphere and loathsome villains, two of Jussi Adler-Olsen's trademrark characteristics. Nevertheless, despite the popularity and critical acclaim of the movies, the Danish author has stated in an interview he gave to the English Nordic noir expert Barry Forshaw that he hasn't even watched them as he believes that a two-hour film cannot possibly fully absorb and depict the plot intricacy of a book that exceeds 500 pages. Adler-Olsen's Department Q novels are the author's most distinguished work, but his oeuvre also comprises of several noteworthy standalones such as The Alphabet House, and The Washington Decree which are novels where the author sets the tone for what was about to follow in regards to the maturity of his prose and choice of narrative structure.

The author has early declared his decision to end the series in ten novels and his plan was to devote the last three books, The Scarred Woman (#7), Victim 2117 (#8), and The Shadow Murders (#9) to the characters of Rose, Assad, and Carl respectively. In each of the aforementioned novels the plot revolves around one of the members of the cold case unit and provides the reader vital information regarding their background and personal history that is crucial in order to make them easier identifiable to the reader. I was severely disappointed by Assad's book as I was expecting much more from a character that is one of the most compelling figures in the contemporary Scandinavian crime fiction. Victim 2127 was tedious, the story was over-the-top, and the antagonists completely implausible. Rose's arc in The Scarred Woman was more mysterious and intriguing, and even inclined some pf the readers to draw parallels between her character and that of Stieg Larsson's legendary Lisbeth Salander. In The Shadow Murders, Adler-Olsen pursuits to create a labyrinthine main plotline, while at the same time putting Carl in a tight spot as a consequence of the aftereffects of an old case that marked his life which comes back once again to haunt him and threaten his peaceful familial and professional life. The final result is rather disenchanting as in the first half we follow a complicated police procedural storyline that stretches decades in the past and concerns a multitude of cases that have been dismissed as accidents or suicides. In the second part, the villain is revealed and as we expect the story to pick up pace and become more of a thriller, we are eventually let down by a downtempo development and a plot which becomes increasingly excessive. Plus, the villains lack clear motivation, a rather vexing flaw.

The story begins with the head of Copenhagen's Homicide Unite, Marcus Jacobsen, assigning Carl and his team with the case of a suicide of a woman who dies of her own hand in her sixtieth birthday. The reason why this seemingly humdrum event shakes Marcus to the core is that the woman, Maja, had been involved in a nasty case of bombing that resulted in the death of her three-year-old child back in 1988. Marcus was one of the lead investigators in that case and his feelings of sympathy toward the young mother prompted him to delve a bit deeper into an irrational act of violence that defied any kind of discernible motivation. A freak accident or a criminal act? As Carl, Assad, Rose, and Gordon begin to search in the past, they discover a peculiar pattern that reveals itself in a series of apparent deaths occurring every two years for the last three decades in specific points of time. The investigation will be gradually extended to a horde of suspicious deaths that are connected by the inexplicable presence of table salt in the crime scenes. The systematic work by the members of the Department Q will uncover more details that link the crimes, however they fail to close in on a suspect as they lack the most important piece of the puzzle: the motive. In order to find it, they must look closer to the reports of the cases in question and pinpoint every detail that may suggest a reasoning process on the part of a cunning and well-organized killer.

The rationale behind the murders is revealed to the reader early on, seeing that the story is told through multiple perspectives, as it always happens in the novels of the series. Thus, we follow the story of a group of vigilante women who decide to take the law into their own hands and punish all those who are morally deficient and disrespect the law of God. We are introduced to some of the characters that compose the rogue group and we follow their point of view, witnessing the various ways in which they impose their sanctions on their fellow citizens for minor or more serious offenses. Some of the descriptions of the horrendous actions carried out by those moral zealots are pretty explicit and become borderline disturbing. If you are a fan of the author's work, then you are certainly acquainted with the graphic outline of the villains and their crimes, so you won't be taken by surprise with these parts of the narrative. As I have already mentioned, the main antagonist's identity is divulged halfway, so the mystery element dies in the middle of the novel, leaving the story devoid of charm and struggling to achieve proper orientation. I was tempted to skim through pages, especially in the second half of the novel, a fact that illustrates the overall lackluster feeling exuded by the story. Carl's sub-plot is barely present in the text, though the cliffhanger ending indicates that it will be more thoroughly explored in the final installment. Moreover, details of Carl and Assad's family lives are scarcely mentioned, even though there have been some significant developments in this field, as we saw in the previous chapters of the saga. And a final one: the humor that used to set the series apart from the works by equally successful Nordic authors is nearly completely absent, while Asssad's frequent misuse of the Danish language and the constant employment of camel similes that baffle everyone around him seem to have lost their wit and charm.

There were a few things that riled me in The Shadow Murders. First of all, by finishing the book I thought that it was like the author wasn't sure exactly what he wanted to write in terms of the genre. A police procedural, a thriller, a mystery, what? Department Q novels, as a rule, are primarily police procedurals dealing with cases lost in the mists of time, but there were several books, especially the first ones in the series, that flirted with pure-bed thriller. The multiple perspective narrative is a useful tool in that direction as it provides the writer with the ability to broaden the reader's viewpoint and accelerate the overall pacing of the story. Adler-Olsen definitely doesn't write whodunits as the villains are revealed early in the novels and they contribute to the telling of the story as the author wants the reader to become partaker in his evil thoughts and dirty deeds. Nevertheless, in the Shadow Murders it is not clear what the author had in mind regarding the nature of his story. Furthermore, the minimal number of pages devoted to Carl's troubles deprived the reader from a chance to distract his attention from an overladen plotline and take necessary breaths that would make the reading process easier and smoother. Another thing that made me angry was the customary finale that demands one of the main characters to be put in a position in which his life is threatened only to be rescued in the last minute by his comrades. I don't think there is a single novel in this series that doesn't end in such a manner, a monotonous trope that in spite of exciting the reader, it rather annoys him.

To conclude, I think that The Shadow Murders is one of the less compelling installments in an otherwise noteworthy series of books and if I had to give it an honest rating, it would be close to 2,5/5 stars. I was lucky enough to be approved for a free DRC, courtesy of Edelweiss and the publisher. It should be noted that the publication date for this book is September 27, 2022. Fans of the author's work should read it because it is a necessary step in the road of completing the saga, and in a way it paves the way for the last book that will be published in the next two years time. I definitely wouldn't recommend it to those who haven't read any of Jussi Adler-Olsen's novels as it would probably make them wary of his work. The Danish author remains standing as one of the most prominent representatives of Nordic crime fiction and a writer whose books have sold more than thirty million copies worldwide. If you don't know where to start, you should check The Absent One, A Conspiracy of Faith, and Journal 64 all of which have been more than decently adapted into the cinema screen. The movies are also a proper starting point for those who want to dive into Adler-Olsen's fictitious universe. Many thanks to the publisher for the free DRC.