The second novel in the new series by the Icelandic crime fiction master, A. Indridason. 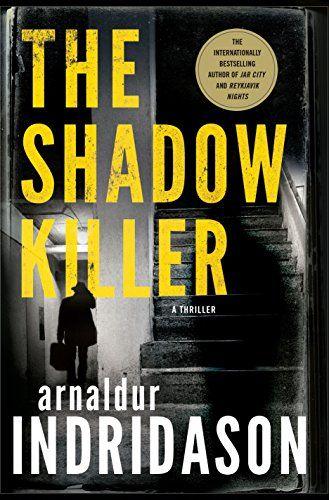 Let me begin by saying that I want to thank NetGalley and Minotaur Books for providing a free ARC copy (in the Kindle e-book format) of this novel which I was expecting for some time as a devoted fan of Icelandic, and Nordic in general, crime fiction. Arnaldur Indridason, the writer of the excellent Inspector Erlendur book series, transports us to the gloomy times of the Second World War and also offers a historical account of the situation in the capital of Iceland, the city of Reykjavik, where British and American forces had established army barracks and bases to protect the Icelanders from a probable Nazi invasion.

The Shadow Killer is the second novel in the new series by A. Indridason, the first was The Shadow District, and even though it is not his best book, it still preserves the high-quality standards which made Indridason one of the very best of Nordic crime fiction's novelists. His prose is simple and austere and manages to engage the reader in the plot, while the dialogue seems natural and unforced. The plot is not overly complicated and is easy to follow, as always in Indridason's books, and while one cannot claim that The Shadow Killer is the typical page-turner, it remains an enjoyable reading experience. The central flaw of the book concerns the characters, as there can be no real comparison between Inspector Flovent and Inspector Erlendur, who is one of the most beloved, though grumpy and fastidious, protagonists in Scandinavian crime fiction. Flovent's character seems to be flat and uninteresting and I didn't care or feel any sympathy for him, throughout the development of the story. The same applies to Flovent's sidekick, the Canadian-Icelander Thorson who is awkward and seems to be constantly out of place.

The story itself revolves around the murder of an Icelander called Eyvindur who works as a traveling salesman and is married to Vera, an unfaithful wife who is involved in intimate relationships with British soldiers. Eyvindur is found shot in another man's apartment and the duo of Flovent and Thorson are puzzled as to who was the target of the killer, Eyvindur or Felix (the apartment's owner).? Is it a case of mistaken identity or not? The investigation will bring to light political intrigues and secrets as well as military espionage agents who took action by the time of the Second World War in Iceland on behalf of the Nazi regime.

The Shadow Killer is an easy read, without being the nail-biting suspense novel some may expect, and is a worthy addition to the bookshelf of every Scandinavian/Nordic Noir fan around the world. Indridason's writing style guarantees a prime reading experience.