A lesson on building suspense by the master, Alfred Hitchcock.

Rope is the first color movie directed by the English master of suspense, Alfred Hitchcock, and it is a picture that sets the standards for the later films of the genre. The story is largely based on the infamous Leopold and Loeb Case and the two protagonists', Brandon and Phillip's, characterization is inspired by the two teenagers who attempted to commit the "Perfect Murder" on May 21, 1924. It was then that Nathan Leopold and Richard "Dickie" Loeb lured the 14-year-old Bobby Frank in their car to murder him using a chisel. They were both heavily influenced by the Nietzschean philosophy of "Superman", though they tragically misinterpreted the great German philosopher, convincing themselves that they had the right to kill another human being if only to prove their own moral and ontological superiority. There is also sexual tension between Brandon and Phillip, besides, n reality, Leopold has admitted being in love with the cunning and charming Loeb, which doesn't escape Hitchcock's attention. This fact led many theaters in the United States to ban the screening of the film, due to its immoral characters and storyline.

It could convincingly be argued that Rope is a bold movie for the time as far as the moral aspect of the film's story is concerned and the film's tone and character ranges from totally cynical to borderline disturbing. Brandon and Phillip murder by strangulation their friend and classmate David and they organize a party afterward. Among this morbid gathering's guests are David's parents who are of course unaware of their offspring's fate. As you can imagine there is plenty of black humor in The Rope and the dialogue parts of the movie are exemplary as a battle of wits between Brandon (John Dall) and his college professor, Rupert (James Stewart) is unraveling to reach its final climax in the last minutes of the film's runtime. I should also stress that this is a movie that was shot between January 12 to February 21, 1948, entirely in studio, apart from the opening credits where Hitchcock makes his traditional cameo appearance, It is shot in such way that gives the impression that the story unfolds in real-time, and the whole movie is one continuous and uninterrupted shot, though that is not true. In fact, Rope was shot in ten takes, ranging from four and a half minutes to just over ten minutes. Hitchcock uses a visual trick "by zooming into a black object blacking out the lens/screen, and making a conventional cut" (IMDB-Trivia).

This is a film that is deemed a cornerstone for the thriller/suspense genre's subsequent productions and it is deservedly considered to be a classic. In my opinion, Rope is on the top-3 films directed by the legendary English auteur, along with Psycho and Dial M for Murder. If you haven't already seen it, consider it a sacred duty and devote 80 minutes of your valuable time to indulge in the film's explicit sense of suspense.

ENDNOTE: The Leopold and Loeb case has been fictionalized in two more films, Compulsion (1959), directed by Richard Fleischer and Swoon (1992) by Tom Kalin. 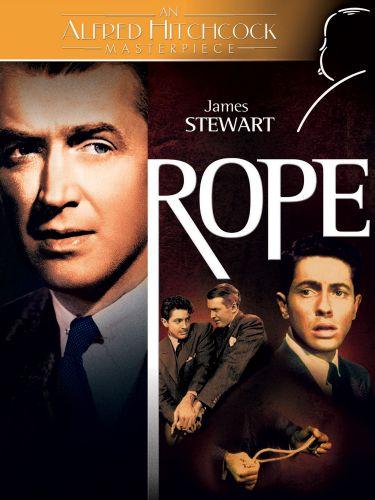