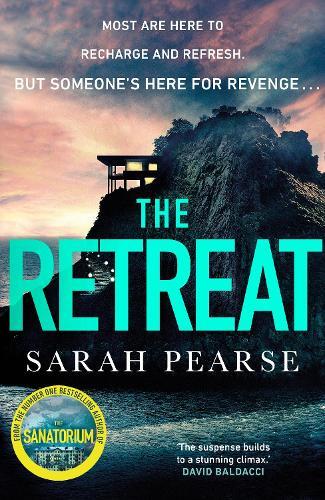 There is an easy-to-spot trend in the crime fiction publishing universe which dictates that the sequel to a commercially successful crime/thriller is to be replicated, in the exact sense, in the following writing attempts of an author. Thus, we often observe the vexatious phenomenon of sequels featuring the same stories and sharing identical settings with their predecessors, something that becomes even more conspicuous in the cases of profitable debuts that are destined to be duplicated in the second novel. That is the case with The Retreat, Sarah Pearse's comeback after the promising Sanatorium, a book that immediately hit the bestseller lists worldwide and was even selected as the February 2021 Reese's Book Club Pick. The hype surrounding Pearse's debut made the readership all the keener to get their hands to her following writing attempt, thus The Retreat was one of the most long-awaited releases in the crime fiction genre for 2022. Sadly, the book is nothing but a mirror to The Sanatorium, with nothing to render it an independent, self-existing work, shadowing its precursor in every aspect. What the author aspires to be a cornucopia of various crime fiction sub-genres, blending thriller, locked room mystery and whodunit ends up being a hodgepodge of repetitiveness in writing style, choice of locale, characterization, and main themes, that ultimately disenchants the reader who kept his hopes up, anticipating an original, hair-rising thriller.

It is like Pearse took the text of the Sanatorium, altered some names and minor plot points and delivered The Retreat probably hoping that the readers won't notice the glaring copying of her debut novel. It is supposed to be detective Elin Warner's second outing in a "new" case that involves a secluded island in the middle of nowhere with a cursed history that still today feeds the imagination of the people visiting, a series of murders that initially seem to be connected with the island's haunted past, and a group of friends, who know how to hide their hostility toward one another who become entangled in the case as the killings multiply. Does it ring a bell? Well, I was confounded, to say at least, as I was reading this book due to patent parallels to The Sanatorium that after a while become annoying and cause distress. However, this is not the only flaw of the novel. As far as characterization is concerned, I have to say that Elin Warner is one of the most unremarkable protagonists in the genre that I've ever encountered. And I don't mean in the understated sense as it is the case with mythical detectives such as Arnaldur Indridason's Erlendur, but in the actual meaning of the term as the character is underdeveloped with the author throwing some bits and pieces concerning her personal status quo and past events that marked her life, without consistency thus conveying a jumbled feeling to the reader who doesn't get a full picture of who Elin actually is even after reading the novel's last page. Hence, the reader cannot feel anything for the protagonist with the book losing another cornerstone anchor that could help immerse the reader into the story.

The story begins with a group of friends visiting an eco-wellness retreat in a remote island off the English coast known to the locals as Reaper's Rock due to the imposing shape of a giant rock that looms behind the retreat. When one member of the party, and more specifically one who shouldn't even be there in the first place, is found dead on the rocks below the luxurious yoga pavilion, Elin Warner and her team will be called to investigate a death that is considered to be suspicious due to a number of bothersome occurrences that prompt Elin to think that perhaps this could be murder. The body count will rise the next day when the body of a young man is found drowned in an apparent diving accident. The short span between the deaths makes the murder theory all the more enticing to Elin and her colleagues. The protagonist also happens to be the fiance of the man who designed the retreat, Will, whom we already met in The Sanatorium, a fact that further perplexes her investigation as the plot ploughs forward. The progress of the investigation indicates that the two killings are linked to the past murders of a group of students that took place in the island nearly two decades back. Local legends about the existence of the "Grim Reaper", an elusive killer who managed to fly under the radar for a very long time, rise on the surface and make Elin sure that the past of the island is linked with the present in a horrid cycle of blood and mayhem.

One of the -many- major cockups in The Retreat is the weakness of the setting that is supposed to be terrifying and forebearer of evil deeds, but the author's apathetic descriptions of the locale never quite manage to hit the right note with the reader who receives a loose image of an isolated place that instead of feeling threatening, comes across as rather innocuous. The addition of a last sentence in a chapter in the likes of "And the island seemed to wish her (Elin) ill" fall flat and fail to convey the desired impression. The story is divided into the police investigation of the murders and the inner workings within the group of frenemies that advance the plot. Both threads are equally disappointing as the reader who is familiar with Pearse's debut can and will guess what is happening and who is the villain early on. There is no surprise and the supposed thrilling twists are nothing more but a mere reproduction of those that transpired in The Sanatorium. Furthermore, the author employs some overused tropes, mostly found in the Nordic crime novels, such as child abuse, the abused becoming the abuser, and the ritualistic killings that initially seem exciting and bizarre only to be finally revealed that the true motive behind the crimes is the thirst for personal revenge. All the above make for a tiresome, and rather annoying, read that has nothing new to offer and the only thing that proves is the publisher's irrational demand for the author to re-write her first, successful, novel.

Perhaps my review seems a bit harsh, but I was supremely disappointed by The Retreat and one of the reasons is that I've truly enjoyed The Sanatorium beforehand. I expected a lot more by Pearce, an otherwise talented thriller author, but it seems that she fell prey to the imposing exigencies of her publisher. I sincerely believe that there is no good reason to give this novel a chance if you've already read the author's debut. It's a shame and a waste for new writers who are supposedly aiming to reinvigorate the genre to create nothing but a mere imitation of their previous work. I want to thank Netgalley and the publisher for providing a free ARC of this title in exchange of an honest review.