A delightful black comedy from Finland. 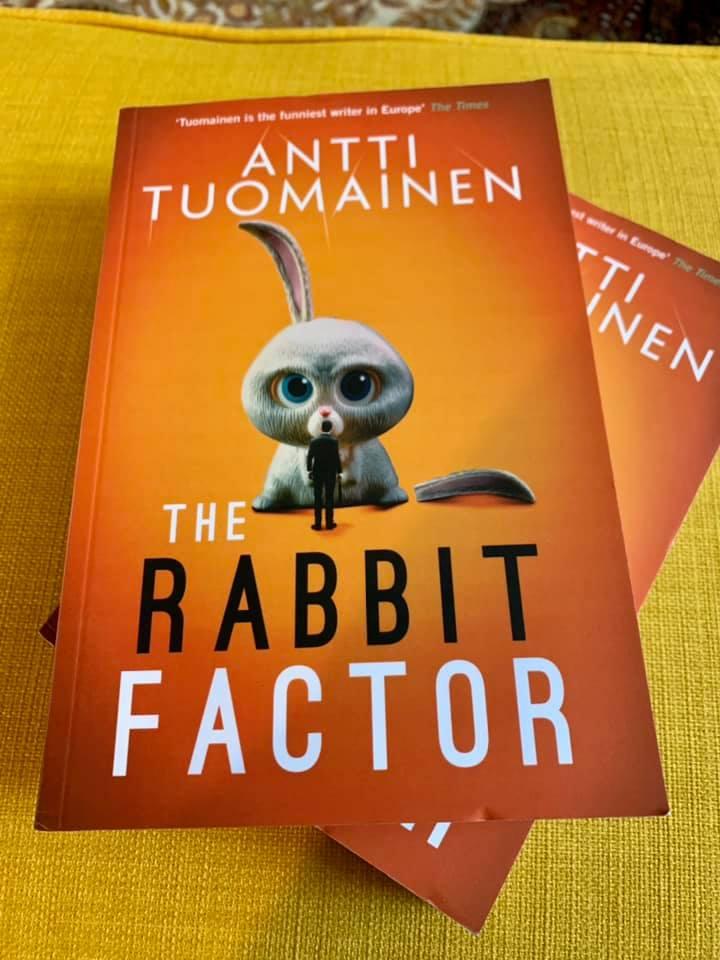 The first part in an intended trilogy, Antti Tuomainen's The Rabbit Factor is much more than a typical Nordic crime novel as the Finnish author combines the farcical with the lurid and the outcome is a multi-faceted book that resists strict genre categorization for all the right reasons. The ubiquitous comical element is aptly incorporated to the main storyline that chronicles the journey of a rather one-dimensional protagonist to a fully-fleshed character through the power of art and love. The text bears the trademark characteristics of Tuomainen's writing style and dazzles the reader due to its wittiness and dark humor that pervades the plot and provides the necessary relief from some truly heinous acts such as the murder of a man with the ear of a giant plastic rabbit.

Both the protagonist, Henri Koskinen, and the villains are drawn as unconventional and idiosyncratic individuals who dance around each other for the sole purpose of profit and their course of action is dictated by the exceptional circumstances carved out by the death of Henri's brother, Juhani, who leaves a substantial debt to be paid. Henri is an insurance actuary and a firm believer in the power of mathematical reasoning. His whole life rotates around numbers and he finds comfort in the precision of his computational skills that help him choose the optimal way of behavior every time he finds himself in a difficult situation. Rationalism is Henri's secret weapon, applying order to a chaotic world that often becomes unfathomable because of its ever-growing unknown variables generated from the people's unstable and unpredictable emotional responses to external stimuli.

The action begins with Henri getting fired from his job in the insurance company as his boss embraces a radically innovative view on how to run the show and bond with his employees. Bewildered by the latest developments, Henri is visited by a lawyer who announces to him that his brother has died due to heart failure and that he has inherited Juhani's adventure park, a profitable venture in Helsinki's outskirts. Reluctantly, Henri visits the park and gets to know some of the people working there such as Kristian, Laura, Minttu, and Esa who work on different sectors and altogether constitute the team that essentially runs the business. After a thorough audit of the financial and accounting reports of the park, Henri realizes that there are hefty sums of money missing with no apparent explanation.

Struggling to work out what is happening, he gets a visit by two gangsters who inform him that Juhani had borrowed a lot of money for them and that now Juhani has inherited the debt. Initially, Henri denies to discuss with the two thugs, however he soon understands that he has no other option but to submit and find a way to repay the initial capital and the extraordinary interest that is demanded. In a desperate state he hatches a complicated plan that is beneficial both to him and his debtors and involves large-scale money laundering through his newly inherited business. At the same time, Henri gets romantically entangled with Laura, the park's general manager, who is also a painter and a woman who adopts an aesthetic view of life. Their intimate relationship will have a profound effect on Henri who will realize that perhaps there is more to life than numbers and equations.

The purely criminal aspect walks hand-in-hand with the romantic one and the reader witnesses Henri's transformation from a frigid calculator to a whole new human being who appreciates beauty as expressed in Laura's ravishing murals that decorate the walls of the adventure park. His interactions with the world of organized crime are hilarious as the villains are portrayed as ruthless, nevertheless all too human actors having their own whims. For example, the big crime boss has a knack for baking gargantuan cinnamon buns that he later feeds his guests at gunpoint. Tuomainen's narration is exemplary as we follow Henri's first-person account of the plot's events and we witness his complicated thought process that involves the use of advanced mathematics and deductive reasoning. It should be noted that the English translation by David Hackston is flawless and the flow of the text is uninterrupted and natural, reducing nothing from the original.

I hear that there will be a feature film adaptation of The Rabbit Factor casting Steve Carell in the role of Henri Koskinen. It would be interesting to watch the experienced American actor incarnating Tuomainen's odd protagonist and I believe that this novel provides the best basis for a compelling script. It contains all the main elements of a dark crime/comedy mixed with a peculiar love story that is destined to move and engage the audience. Fans of the Finnish author's previous work should definitely read this one and the same goes to all those who love quirky crime novels with unique characterization. I will be eagerly waiting for the second installment in the series and I hope that the always up to the minute Orenda Books will soon publish more of Tuomainen's work.