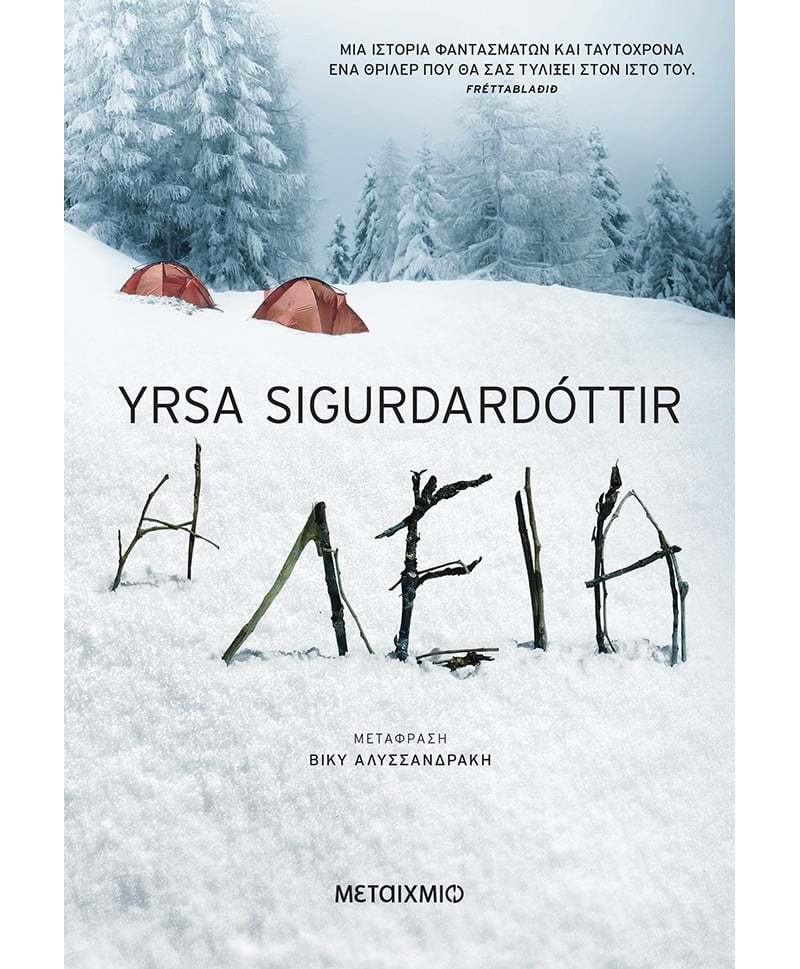 NOTE: I read this book in the Greek edition (title: "Η Λεία") by METAIXMIO publishing house, translated by Viky Allysandraki. Though there will be an English translation in the future, I couldn't find a fixed date announced thus far.

The novel that won the prestigious Icelandic Blood Drop Award (Blóðdropinn) for the best crime novel in 2020 and the one that marks the longed-for return of Yrsa Sigurðardóttir to the mood and style that established her reputation as one of the most illustrious Nordic crime writers, The Prey (original title: Bráðin) will bring back lots of memories for the author's fans as it features an electrifying ghost story, told through the eyes of multiple characters. Much like Sigurðardóttir's best-selling standalone horror/thriller I Remember You, which was auspiciously adapted for the silver screen by Óskar Thór Axelsson in 2017, The Prey dazzles the reader due to its terrifying imagery with the author taking full advantage of the story's setting, that is the Icelandic wilderness and more specifically its most isolated parts while employing all the pertinent storytelling techniques needed in order to release the maximum potential of the narrative. Here, there is nothing reminiscent of Sigurðardóttir's most recent "Children's House" book series as the plot rather than being a plain police procedural, brims with bizarre occurrences and unexplained phenomena that put the reader in a wholly different state of mind compared to the Huldar and Freya novels. This work by the Icelandic "Queen of Crime Fiction" is closer to the Þóra Guðmundsdóttir's saga, which was completed in 6 parts, in terms of both atmosphere and the choice of literary devices made by the author.

The plot unfolds through manifold perspectives with the narrative featuring several main characters whose sub-plots gradually merge and eventually intersect in a meaningful way in the story's climax. The Prey is much more than a mere ghost story as the suspense and the thrills that the author has in store make the reading experience more flavorful in comparison with the generic works of this particular (sub)genre. The horror element is ever-present throughout the course of the book, and it is largely generated through the thorough capitalization of the ominous setting's capacity for chilling moments as well as the quirky characterization that goes hand-in-hand with the story's tone. The Icelandic author's descriptive parts display her ever-growing maturity in conveying terror and dismay through the use of as less words as possible, avoiding repetition and copiousness while setting the highest of standards for her future writing endeavors. Clarity in writing style, allowing the text to be easy-to-read without squandering its stylistic attributes, is Sigurðardóttir's priority and desideratum and the final result is totally consistent with her intentions regarding the tonality of the novel. The text's pulse is throbbing from the beginning until the end, leaving no room for the reader to loosen up as there are plenty of twists and turns that upend the narrative as told theretofore, another of the book's prime merits.

The story of The Prey is told through three distinct points of view and in two separate timelines, the two unfolding in the present and the other one in the past, one week earlier. The book commences with a search and rescue team being sent in deep in the Icelandic highlands to look for any traces left by a group of travelers who went missing after going a winter excursion. One of the members of the team is Johana, a young volunteer who is also the unlucky one who spots the dead body of one of the travelers' group next to a dead reindeer. Johanna, along with her police officer husband, will comprise the perspective of the police investigation on the misper case. Jorvar is a middle-aged mechanic who works at the remote radar station located in Stokksnes, on the southeastern Icelandic coast near Hofn and Hornafjördur. Jorvar's endless shifts will take a macabre twist as it seems that he is not alone in the vast space of the station. There is a strange voice calling him through the intercom, trying to tell him something that remains unintelligible, but slowly begins to creep him out and make him question his own sanity. The third and final POV is that of Drefn, the sole past timeline narrative in the novel, one of the five travelers who vanished, and this is perhaps the most terrifying and disturbing segment in the novel as the group's expedition is filled with oddities and voices from beyond that haunt Drefn and her amigos as they plough through the desolate snow-laden landscape with the whiteout conditions dominating the scenery.

All three sub-narratives are equally fascinating and keep the reader's attention steadfast on the page. Each one has its own riddles and revelations and the intertwining between all of them becomes evident as we reach the story's conclusion. The finale is gratifying, leaving nothing unexplained as it always happens in an Yrsa Sigurðardóttir thriller. There is a complete lack of plot holes in the author's total body of work, a trademark of hers -one of the many- that sets her apart from a large portion of her peers in contemporary Nordic crime fiction literature. Plus, the reader is destined to immerse in her horrifying fictitious universe, keeping turning the pages even if the contents evoke feelings of dread as the nail-biting suspense forbids you from stopping reading. That is the number one reason to read The Prey which delivers on every account and scores highly on every aspect of a top-notch horror novel, in the same vein to the work of the international masters of the genre such as Stephen King at his best. This book will certainly appeal to the author's loyal readership and especially to those who hugely appreciated her, originally published 12 years ago, masterstroke I Remember You. I have to add that I'm one of those who remained apprehensive toward the "Children's House" series, always opting for the Þóra Guðmundsdóttir novels, as I prodigiously missed that supernatural/grotesque element that deemed Yrsa Sigurðardóttir one of my all-time favorite authors regardless of genre. Strongly recommended, though the English-speaking readership will have to wait for an indefinite period of time to get their translated copies.