This French film is a quiet and subtle experience, even though its main theme is the revenge of a young girl, Mélanie (Déborah François), against an aged piano master, Ariane (Catherine Frot). Ten years ago, Mélanie was a little girl full of dreams about becoming a popular but in a crucial audition, the rude behavior of Ariane, who was a member of the jury, broke her concentration, leading in a disastrous result. In the present day, Mélanie gets hired by Ariane's husband as a babysitter and after awhile he wins Ariane's trust and she is appointed to be her page-turner during a crucial and possibly career-ending audition that will take place in a few days. The page-turner of a pianist is a sensitive as well as important role and after so many years, Mélanie has the chance to exact her revenge from the person that destroyed her future as an artist and musician.

The Page Turner is a short film, its running time is no more than 80 minutes, and as a result, the story moves forward quickly, though not in a frenetic pace which confuses the audience. The two protagonists are both decent in their respective roles, especially the reserved and low-key performance by Déborah François is memorable, while the use of piano music adds to the creepy atmosphere of the movie. You always expect that something bad will happen anytime soon, something that makes ''The Page Turner'' an engaging and suspenseful watch. There is also some food for thought concerning the main themes of the story, such as obsession or the limitations of vengeance.

Overall, this film was above mediocrity and if you like more refined and played-down thrillers, you should definitely watch it. In my opinion, The Page Turner is a movie that is oriented towards European audiences rather than American. 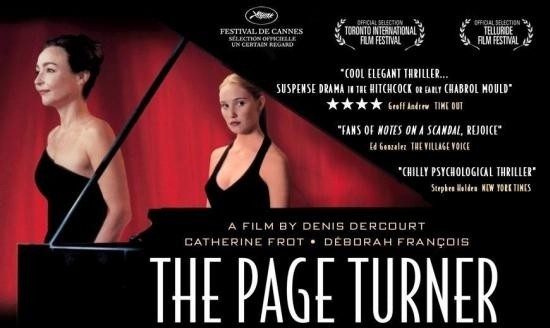