A top-notch medical thriller from Greece.

The new wave in Greek television as far as crime dramas are concerned counts another noteworthy production with The Oath, a 36-part series aired by the Hellenic Broadcasting Corporation (ΕΡΤ) in 2022. The show is written by the celebrated Tina Kabitsi, a young screenwriter whose signature lies under the screenplays of prominent dramas that rocked the still waters of Greek television during the last few years. Her previous creation was the half-crime, half-family drama Fever (original title: Έξαψη), a show that won both the critics and the native audience, featuring an intricate mystery plotline blended with soap-opera-like tropes, however presented in a plausible manner without ever abolishing its stark characterization. In The Oath, Kabitsi's magnum opus so far, the writer treads on uncharted waters as the ambitious project is a first-class medical thriller highlighting scorching social themes like the booming of the homeless people crowding the center of Athens, a grim reality that came as the result of the financial crisis that led to the country's 2010 bankruptcy. The impoverished life of the destitute is not the only motif that the the screenwriter explores as the story is interspersed with various pensive subject matters such as drug addiction and its devastating effects to the community as well as to the individual, grief and the way people deal with loss, the dark side of the local financial elite, and many others.

In a way, The Oath can be seen as a mix between the American milestone medical drama Grey's Anatomy and shows in the same vein to the Danish iconic crime series The Killing (Forbrydelsen). The director of the show is Spyros Michalopoulos, a seasoned television creator who also gave to the Greek viewership the highly popular Wild Bees (original title: Άγριες Μέλισσες), who, in an interview that he gave to the Greek newspaper Pontiki (Ποντίκι), lamented Greek television as he believes that "it suffers from introversion. It mainly deals with social, only in pretense, subjects that do not open new paths for thought, but, on the contrary, amplify the introvertness of our society. We will see vendettas (...) we will see family issues but never a serious social problem. It turns a blind eye, on purpose perhaps" (you can read the interview, which is in the Greek language, here). Thus, this new attempt at reinvigorating the saturated themes featured in the vast majority of the Greek television productions, possesses a revolutionary aspect, forcing the audience to look harder in places that he tends to disregard in his quotidian existence. The show raises our awareness of a hard-to-digest truth and the writer treats the pariahs of today as truthlike, three-dimensional human beings, crafting a set of shabby-looking individuals who, nevertheless, demand and deserve our attention and respect.

The protagonist, Angelos Raptis (Y. Stankoglou), a superstar surgeon, fights his overwhelming feelings of grief over the death of his wife and little daughter in a car accident, one year earlier. As Angelos roams the streets of Athens he stumbles upon a pregnant woman who is about to give birth. Having no time to transfer her to a maternity clinic, Angelos delivers the baby against all odds, leaving the woman grateful and in awe of his skills. Her husband is one of the country's most affluent businessmen, the shipowner X. Zafeiris (D. Papadopoulos). Zafeiris is willing to help Angelos and his brother, Pavlos (Y. Gallos), the director of the major clinic where also Angelos used to work. Pavlos has a vision to create a streetworking team of medical professionals who will offer assistance to the ever-rising number of homeless people. He names the project as "Street Medicine" ("Ιατρική Δρόμου") and asks Zafeiris to sponsor his idea. Zafeiris accepts, thus Pavlos forms a small group of doctors and rescuers who are going to work nights, delivering medical care to the homeless. Angelos becomes the leader of the group, nevertheless his participation to his brother's project is due to a nagging suspicion that perhaps Zafeiris had something to do with his family's demise a year prior. He begins to make his first expeditions with the group while at the same time embarking on a quest to find the truth about the accident that ruined his life.

The purely crime/mystery aspect of the story remains, more or less, sidelined for the first 20 episodes or so, with Angelos making slow progress in his personal investigation that is inextricably linked with the world of the underprivileged, is the creators' main focus. We are introduced to the members of the team who, apart from Angelos and Pavlos, are Fanis (P. Aleiferopoulos), a promising young doctor working at the hospital, Hloi (L. Michalopoulou), a social worker and also close friend of Angelos's deceased wife, Patty (A. Tili), a bullish rescuer with high humanistic ideals, and Salva (I. Polyzoidis), a homeless man who becomes the guide of the team in the labyrinthine streets of central Athens. The relationships between the members of the team are also one of the writer's main concerns, thus we have the full of friction bond between Angelos and Pavlos, an evolving romance between Fanis and Patty that faces many obstacles in the course of the show, Pavlos and Hloi's concealed flirtation interplay that lurks behind the scenes and a number of other, major or minor, links between the protagonists that never fail to grasp the audience's complete attention. Kabitsi's characterization is one of the show's outstanding merits and the viewer will instantly identify and empathize with each one of them as their actions and motivations feel all too human, without any sign of the screenwriter forcing the story's agents to do or say things that are out of harmony with their ascribed persona.

Of course, The Oath also casts a well-selected group of actors who excel in their roles: Stankoglou is convincing as the aggrieved medical genius who is determined to find the truth, Gallos is portraying his character with a mix of apprehension and vulnerability deeming him one of the most likeable in the whole series, Aleiferopoulos and Polyzoidis play efficiently the opposites in the social spectrum, the former a well-groomed ambitious doctor and the latter a disheveled and disillusioned man who found refuge in the streets after a disastrous investment that left him broke. Areti Tili deserves a special mention as she is the one supplying the story with an unprecedented energy, derived mainly from her character's faith in people and humanity as a concept, taking full advantage of her celestial looks -look at the stunning eyes- and delivering a fully-fleshed performance that could be nominated for an award if Greece had a prize for acting in television. Loukia Michalopoulou, an experienced thespian known chiefly for her work in theater, fully tracks Hloi's melancholic nature and her -mild- despair is evident in her attempts at forging meaningful relationships, first with her boyfriend and later with a little girl who comes to the child housing institution where she works. Plus, her unresolved feelings about Pavlos that permeate the totality of the story are subtly portrayed by the actress who remains in full control of her expression palette.

Angelos's inquest will bear fruit in the final set of episodes where we learn what exactly happened to his wife, a well-known lawyer who worked on a case involving the disappearance of a 20-year-old woman, Miranda. Miranda vanished after a party held at Zafeiris' residence for the birthday of his son. The shipping mogul's character is the shadiest one, even if he begins as a willing helper of the "Street Medicine" project. His arc is reminiscent more of a villain and Kabitsi reserves a dismal fate for him in the ending episode. The denouement provides the necessary sense of catharsis to the audience and nothing remains unexplained in the finale, something that further reinforces the quality of the screenplay. No plot holes, no questions hanging loose. Kabitsi did it once again and this time the final result is superior to her previous works, as The Oath conveys an aura of fulfilment to the viewer who couldn't ask for more when it comes to a compelling crime drama. Due to the nature of the setting and the characters' vocation, the series are brimming with medical terms, names of illnesses, rare syndromes, surgical paraphernalia etc. However, the special lingo is used in moderation and at no time hinders us from understanding what's going on storywise.

I found the mystery revolving around Miranda's disappearance being engaging, but I insist that The Oath is primarily a socially-aware show, aspiring to be something different from the antagonism, counting on its flawless script, shrewd dialogue, and the covering of larger social issues, the most eminent being that of those underprivileged classes living in cardboard boxes fixed on the pavements. In a heartfelt and rather inspiring last scene, Kabitsi dedicates the series to a number of individuals fighting with social prejudices, homelessness, traumas, and addictions of every sort reminding us once again of the overall thematical and tonal context of the production. Kabitsi has a new project in works, titled The Fall (H Πτώση) and I'm already eager to watch what's next by one of the skilled and talented scriptwriters in the current status quo of Greek television. 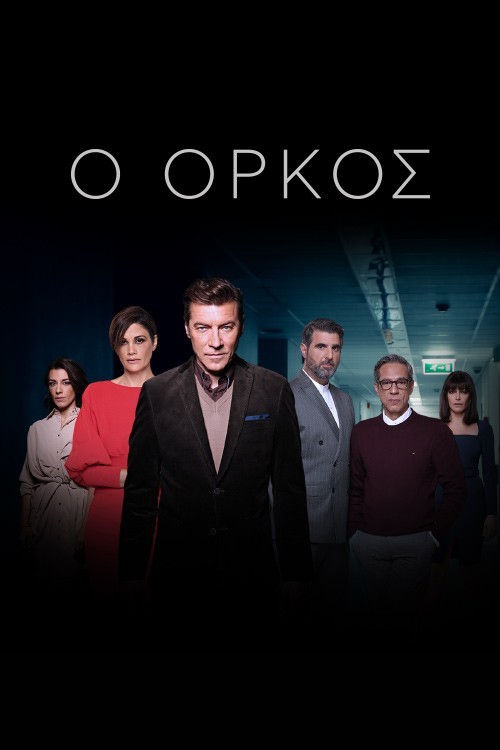