The second book in the exceptional Joona Linna series. 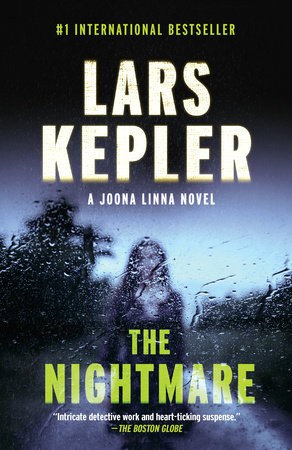 This is an excellent crime/thriller, written by a truly talented duo of Swedish authors, Alexander Ahndoril and Alexandra Coelho Ahndoril who are considered to be one of the brightest representatives of the 'Nordic Noir' genre. The Nightmare is the second installment in the magnificent Joona Linna book series, with the protagonist being a Finnish super-detective working in Stockholm police, and his background story, which unfolds slowly in the first three books in the series, is stigmatized by the unavoidable and necessary exodus of his wife and daughter from his life for the reasons we read about at the end of the third book in the series, titled The Fire Witness.

In my opinion, The Nightmare is a better book than the previous -first in the series- Hypnotist as it seems that the writers are more mature both in their plot planning and rhythm of development as well as their character descriptions. The story begins when Stockholm's police discover two bodies in two -seemingly- unrelated cases which, as is typical of Scandi-Crime novels, begin to merge as the plot starts to unravel. The reader has the opportunity to indulge in great suspenseful scenes filled with plenty of action, and he never feels tired or uninterested. In this book, we are also introduced to Saga Bauer, an extremely competent and effective police officer, sort of a feminine equivalent to Linna, for whom we also learn more in the next novels of this series.

Each novel of the Joona Linna series has a cinematic feeling and effect on the reader and it should be noted that the Hypnotist (#1) led to an on-screen adaptation directed by Lasse Hallström with Tobias Zilliacus as '' dourly driven investigator Joona Linna'' (Hollywoodreporter.com).
In my opinion, the Ahndoril duetto (husband and wife) belong to the elite of contemporary European crime fiction (Scandinavian or not) and the Jonna Linna series is one of the most exciting and seducing I've ever read (note that I am an avid crime fiction reader) and I will always eagerly awaiting Lars Kepler's new books.

I want to thank NetGalley and Knopf Doubleday Publishing Group for providing a free ARC of this magnificent novel.