Not Llosa's best, but still worth a read. 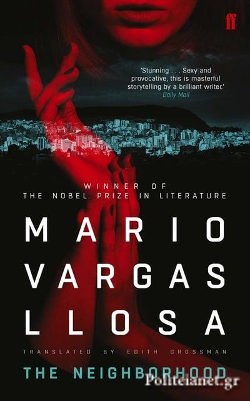 "Power. You don't fool around with power, my friend. In the end, things are always a matter of life and death when power is at stake." (p. 209)

Mario Vargas Llosa is one of the most celebrated Latin American authors, the Peruvian representative of the so-called "Latin American Boom", a literary movement that thrived in the decades of 1960s and 1970s and consisted of a group of novelists originating from countries such as Mexico, Colombia, and Argentina who adopted a whole new, experimental way of writing, embracing political themes and attempting to address the turbulent political life of that era in their part of the world. The Literature Nobel Laureate of 2010 and author of massively influential works of both fiction and non-fiction, Lllosa expanded his reputation throughout the years as a highly versatile writer who doesn't conform to the rules of the strictly-defined genres, often changing his writing style according to the story that he wants to tell. His work covers a variety of literary fields including journalism, fiction writings, literary criticism and many others. His most well-known novels are The Green House, Conversation in the Cathedral, The Time of the Hero, and The Feast of the Goat to name just a select few. In his books, the Peruvian author conveys his own thoughts and perspective on the civil realities of his home country and even though he avoids dogmatic aphorisms and didactic approaches on burning political issues, the way in which he expresses his point of view on a variety of controversial societal realities deem him a writer who cares deeply about the society in which he lives in.

It is true that The Neighborhood is not Llosa's magnum opus, nevertheless remains a read that is worthy of the readers' attention as it is a special blend of political thriller and a first-class analysis of the class polarization in Peru in the decade of 1990s. The setting of the story is the capital city of Lima which is described in vivid, yet solemn colors in a period that has been described as one of the most challenging in Peru's modern history as it was then that one of the most contentious political figures led the nation as the President of Peru. Alberto Fujimori, a Peruvian of Japanese descent, was a man with questionable morals and many still believe that he acted more as a dictator than a democratically elected leader. His ten years of government were marked with an abundancy of scandals, a rise in domestic terrorism, high levels of corruption within the state apparatus and gross violation of human rights. The many failings of the Fujimori regime are not so much described as such in a definitive manner, but can be inferred by the reality in which Llosa's characters live in. At the time, Peru was ravaged by a series of terrorist acts that resulted in the establishment of curfew, perennial blackouts, and a sense of dread for the wealthy citizens of Lima who couldn't help but picture themselves or the members of their families as the next targets.

The titular "Neighborhood" is a reference to one of Lima's most treacherous places, the Five Corners district in the heart of Barrios Altos. Despite its past glorious days as a place of residence for musicians and bohemian artists, the neighborhood gradually lost its charm and ended up being one of the city's forbidden zones. An army of shady individuals, thugs, compulsive gamblers, beggars, and vagrants prowl in the streets and terrorize the upstanding members of the local elite who live a stone's throw away from them. Five Corners is a place crucial to the plot as you will realize while reading the novel and its skillful description by Llosa transports the reader in a faraway community where he can almost feel the tension that is lurking in every single corner of this slum located in the border between the rich and the poor in Lima. The Nobel-awarded novelist juxtaposes the posh, ostentatious lifestyle of the financial aristocracy with the deprived everyday existence of the majority of the population. This contrast works well for the most part, even though I think that there are times where Llosa favors the accurate description of the harsh class struggle within the local community over the development of the story per se.

Enrique -"Quique" Cárdenas is a wealthy, upstanding entrepreneur whose investments in the mining industry made him rich beyond any imagination. He is married to Marisa and together they live happily in one of the most classy suburbs of Lima. Quique's peaceful existence will be shattered when one day he receives a visit in his office by the despicable editor of a weekly yellow-press magazine that thrives on salacious scandals about the most famous Peruvians. The journalist, Rolando Garro, is there to blackmail Qique with some explicit photographs taken from an orgy in which the businessman took part two years ago. Quique resists Garro's advances and declines to satisfy Garro's demands. The result is his public humilation as the editor of the Exposed magazine, true to his blackmailing scheme, publishes the sleazy photographs on front page attracting national attention due to the status and financial prowess of Quique. Furthermore, the businessman will have to face more trouble when Garro's body is found horribly stabbed and beaten in a street in Five Corners. Quique is considered to be the prime suspect even if he swears to the authorities that he had nothing to do with the murder.

Quique's wife, Marisa, will be thoroughly shocked by the eruption of the sex scandal involving her husband, even though she secretly has an affair with Chabella, the wife of Quique's best friend and trusted lawyer, Luciano. Llosa chooses to begin the novel with a first chapter solely devoted to the first time that Marisa and Chabella become intimate, in a sub-plot that doesn't make much sense plotwise, or better seems inconsequential to the main the main storyline. The sex scenes, though well-written, from a point onward feel contrived and the reader wonders why so much space is filled with explicit sexual descriptions that add nothing substantial to the narrative. The tense relationships between the four friends are easy to comprehend and perhaps a less uneven characterization would add a positive element to the novel. For example the reader is introduced to the characters of both Marisa and Chabella under the prism of their illicit, extramarital entanglement. We learn nothing about their personalities, their desires, their motives etc. Quique is more consistently explored as a protagonist, even though in that case too things would have been better if we were allowed to get an additional glimpse to his inner thought process.

Quique's and Luciano's families are the one side of the coin in Llosa's fictional universe and to counterbalance their upscale livelihood by throwing in a character who lives in the margins of society. Juan Peineta is an ex recital artist who used to read out loud writings of the most notable Peruvian poets and dramatists in various theaters and festivals. After a brief brush with television and a failed attempt to build a career as a comedian, Juan is seething against Garro as he considers him responsible for the end of his professional life due to things that the editor of the Exposed magazine had written about his skills as a humorist. Even today, in an elderly age and suffering from the early symptoms of dementia, Juan is writing letters to the media, denouncing Garro and his methods of journalism that prey to the weak and vulnerable in order to feed the public with sordid gossip. Thus, when Garro is found murdered, Juan will also become a person of interest in the police investigation. In the end, he will have no other choice but to admit to a murder that he didn't commit in order to cover for the actions of the most powerful men in the country's political scene.

Quique and Juan's worlds are so different that a dichotomy is created in the mind of the reader who is prompted by the author to ponder on the chasm between the well-heeled and the destitute in the Peruvian society of the nineties. Furthermore, Llosa cauterizes the ever-present phenomenon of corruption in the upper echelons of the country's politics and the actions of unscrupulous individuals holding great power inside the maze of the system. Besides, the 2010 Nobel Prize to Llosa was awarded "for his cartography of structures of power and his trenchant images of the individual's resistance, revolt, and defeat". The simple man falling prey to the workings of a crooked structure is evident in The Neighborhood and in that sense, it is a typical novel by Lllosa. However, some substantial flaws having mainly to do with the deficient characterization and the narration of a story that had much more potential force me to classify this title as one of the Peruvian author's less appealing works. It would be advisable to begin with one of his most acclaimed works such as those I cited in the first paragraph of my review. To conclude, I was expecting something more from a writer of this magnitude and the lasting impressions are rather mixed. It is certainly a must-read for those who are interested in the political proceedings in Latin America in the past decades and its historical value is indisputable.