Perhaps the weakest installment in the series so far. 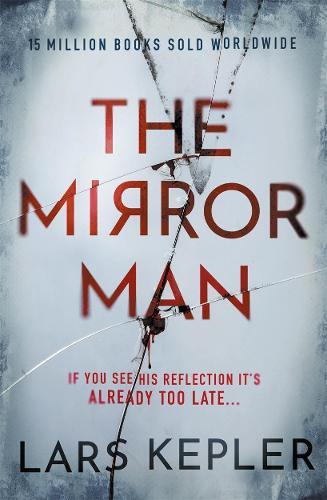 After settling the score with his arch-nemesis, the notorious Jurek Walter, Joona Linna returns for his eighth adventure in the acclaimed series written by the Swedish duo of Alexander and Alexandra Ahndoril, known to the global readership by their nom de plume, Lars Kepler. The previous novel, Lazarus, has been a great commercial success as the many fans of the series have been long waiting for a final showdown between Joona and Walter and the ending provided a definite solution to the story that began in Sandman. Lars Kepler is a trademark name for explosive crime stories that tend to shock the reader with their disturbing themes and grisly plots. The authors are known for their fast-paced, highly gory serial-killer thrillers and in their latest work, The Mirror Man, they adopt a similar approach to their story in terms of main themes and narrative structure. Linna is one of the most popular Nordic detectives and his risky undertakings enthrall the reader who keeps turning the pages, plunging into truly gloomy stories featuring some of the most abhorrent villains ever encountered in the works of the genre.

The Mirror Man is the eighth volume in the Joona Linna saga and one of the weakest novels in the series. The main storyline is pretty much the same as in the previous books, Joona hunting an elusive serial-killer who abducts young women and holds them imprisoned in a secluded place. Saga Bauer, a dynamic character who played a critical role in the earlier installments, is sidelined after the devastating end of Lazarus which left her ailing and grieving. Saga makes a brief appearance in the story, though her contribution is limited as she now resides in a caring center having lost the ability to talk. There are some more familiar characters featured in the story, such as Joona's daughter Lumi, and Erik Maria Bark, the hypnotist whom we met in the titular first book. Bark also was a major player in Stalker, one of the best novels written by Kepler. Nevertheless, the emphasis is given on Joona's investigation and we have once again the opportunity to witness his rogue tactics and distinctive persistence that prompts him to act in a way which vexes his superiors, but produces results.

Five years earlier, Jenny Lind, a 16-year-old girl gets abducted in her way home from school. The only eyewitness of the abduction is not of much help to the authorities as she can only give a vague description of the culprit. A nationwide manhunt is initiated and the police, the media, and the general public participate in the search for Jenny, nevertheless after a while and with no leads to follow, the investigation is shelved and Jenny is forgotten. After five years, Jenny is found hanged in a playground in central Stockholm and it seems that the killer wanted to make a statement regarding his omnipotence and to taunt the police by committing such a brutal murder in such a conspicuous place. Joona is the first to identify the victim and he soon becomes obsessed with finding the perpetrator, even though his new boss, Margot, who succeeded Carlos Eliasson, is reluctant to put him in charge of the inquiry as his past indicates that Joona is a rather unconventional detective who is ready to bend the rules and resort to unorthodox methods if the case demands it.

The authors employ the multiple perspective narrative and apart from Joona's point of view, the story also propels forward through the eyes of a couple, Pamela and Martin. The CCTV cameras in the vicinity of the murder show Martin witnessing Jenny's hanging as he takes a night stroll with his Labrador. The problem is that Martin suffers from severe mental health issues that were aggravated by the death of his only daughter, Alice, who drowned while being on vacation with her family. In the first chapters, we get to know Pamela and Martin a bit better as the writers chronicle the account of the harrowing accident that marked the couple's life permanently. Martin's involvement in the case is crucial as he is the sole eyewitness and the only person who can help Joona track down the killer. However, his disorder doesn't allow him to express himself clearly and Joona will have to find alternative ways to unlock his witness and get the vital information that will lead to an arrest. Erik Maria Bark will be called to hypnotize Martin and extract a detailed description of the perpetrator. At the same time, Pamela, who is also dealing with a number of personal struggles, plans to adopt a teenager, Mia, but soon realizes that the killer is watching her and Martin closely being determined to punish Mia if her husband talks.

Every novel by Lars Kepler begins with an intense chapter that often entails graphic descriptions of horrendous violence and The Mirror Man is no exception. The narration of Jenny's kidnapping is gripping and inclines the reader to think that a captivating story is about to follow. In the next chapters, the authors go a step too far, sharply illustrating the mutilation of a young girl who attempts to escape from the villain's self made prison. I thought that this was a bit too much even by Lars Kepler's standards and offers nothing to the story. Joona enters the stage after those blood-soaked parts and his emergence acts soothingly for the reader who feels that he sails in familiar waters as he reads about the beloved protagonist who has returned to the National Crime Unit and struggles to rekindle his relationship with his daughter, Lumi. The latter is hesitant to forget and forgive her father for some of his actions during Jurek Walter's hunt in Lazarus and that puts an enormous strain on their bond. I think that this father-daughter relationship ought to develop more in the following installments as it provides an ideal basis for Joona's character to evolve.

The plot is simplistic as well as underdeveloped without major twists except for the final one and even though the multiple POV narrative quickens the pace, there is no substantial mystery or suspense to keep the reader glued to his seat. The final outcome is underwhelming, especially if you are a loyal fan of the series. I think that the authors counted more on the explicitness of some of the scenes and neglected the actual plot. If you are expecting something in the likes of novels such as The Hypnotist, Stalker, or even The Fire Witness, you will be let down. There were times that I felt fatigued and I even considered abandoning the book before the finale. That's a first with Lars Kepler and proves my point that this title lacks some essential elements that make a serial-killer thriller stand out. I found The Mirror Man to be predictable and arduous, deficient of solid main storyline, and also over-the-top violent. I want to believe that this will be nothing more than a parenthesis in the authors' body of work and that the next chapter will be reminiscent of the great atmosphere of the first installments. Fans of Joona Linna's character will want to add this title in their TBR list, even though they will feel disappointed by the final result.