Mark Mylod's latest feat, The Menu, is a bleak comedy as well as a relentless, acerbic critique of the haute cuisine world that is populated by an army of self-entitled, bourgeois individuals who thrive on superficiality and never miss a chance to display their conceited self-image, frantically attempting to convince everyone around them of their superiority. As a director of 13 episodes of the superlative television series, Succession, Mylod has already explored the vanity and exhibitionism dominating the universe of the rich and famous, so, thematically, The Menu feels like the natural extension of his small screen work, though this time his assessment of the featured characters is more straightforward and lacking the subtle sophistication of the Succession screenplay which, additionally, bears the signature of one of the movie's co-screenwriters, Will Tracy. The creative team behind the production are explicitly intending to structure a genre-transcending flick, blending numerous styles and categories, sometimes being closer to a black comedy and others resembling a slasher/horror film. Ralph Fiennes shines in the role of Chef Slowik, a disturbed culinary professional who executes a premeditated plan aiming to eradicate his clients who decided to visit his exclusive restaurant located in a remote island.

The movie can be roughly divided into two main parts with the first one portraying the snobbery and presumption of the characters as illustrated through their dialogues and attitude toward the restaurant's staff. The group of the so-called "foodies" consists of a decayed actor (J. Leguizamo) and his assistant (A. Carrero), a trio of loud and cocky tech entrepreneurs, an elderly affluent couple (R. Birney and J. Light), a cynic food critic (J. McTeer) and her editor (P. Adelstein) and a young man obsessed with food as a concept (N. Hoult) who brings a last-minute date along with him, the more relaxed and nonchalant Margot (A. Taylor- Joy). Margot will prove to be the catalyst for the plot as she represents the ordinary man, deeming her sympathetic to the audience which instantly identifies with her behavior. She is the odd woman out in a crowd of obnoxious guests whose secrets and well-hidden sins will be exposed in the course of a night that will gradually obtain all the trademarks of a nightmare. The restaurant's staff, led by the callous Elsa, a brilliant performance by Hong Chau, is a character on its own, a uniformed team of cooks who blindly obey to their master chef, always answering his demands in unison, in way more reminiscent of a battalion.

The second part of The Menu is an authentic horror show that kickstarts when Chef Slowik, who delivers a brief spiel before the presentation of each one of his dishes, is revealed to the clients for what he truly is, instigating a wave of mass panic that leads to the mutilation of Reed Birney's character. The chef enjoys playing sadistic games with his victims and he even lets them run for their lives, giving them a head start of a full minute only to recapture them after a while, thus obliterating any hope for survival. At the same time that Slowik performs his twisted antics, he makes certain that his victims understand the reasoning behind his actions, exposing their unpunished crimes and playing the one against the other, divulging secrets that tarnish their well-polished facade. The grotesque, blood-soaked imagery of this part is interjected by close-up shots of the dishes invented by the chef and cooked by his loyal staff, adding to the bizarre mood that dominates the screen until the finale. The plot's structure and development are heavily reminiscent of teen slasher films where the naive, unsuspecting victims redeem their characters' flaws with their own, violent death. The restaurant's clients constitute an ideal group of sacrificial lambs, and they are doomed to be despised by the audience due to the inflated arrogance defining them.

There are several lines in the script heralding what's about to follow and the majority of them are delivered by the exceptionally outlined character of Elsa, the short-statured chief of staff, whose poisonous quotes baffle the restaurant's guests from the very beginning. At one point, Elsa tells one of the crude businessmen: "You will eat less than you desire and more than you deserve", leaving him dumbfounded and struggling to fathom the possible meaning of these few words. Moreover, Chef Slowik's tendency to elevate something so common, some may say even banal, as food to an abstract concept is indicative of his distorted frame of mind that petrifies both his guests and the audience with its controlled ruthlessness and abundant cruelty. Fiennes is once again excellent in his portrayal of the deranged chef and his measured, collected enunciation of his lines makes for a stark contradiction to his loathsome acts. The rest of the cast makes the best of their respective roles with John Leguizamo, as a former celebrity who strives to keep himself in the spotlight, and Janet McTeer, in the role of a vindictive food journalist, sticking out as the most enticing performances in the film. Nicholas Hoult deserves a special mention as he delivers a plausible portrayal of a young, gullible man, obsessive with cuisine and Chef Slowik, and his rendition of Tyler's role leaves many promises for a bright future acting career.

Even though The Menu is not pretending to be a profound examination of the lives of the privileged or a studied social commentary attempting to cauterize the ills and analgesia of the elite society, it remains a genre-defying motion picture that stands out by virtue of its meticulously crafted script, co-written by Will Tracy and Seth Reiss, and the striking photography that complements the whimsical scenario. Each member of the, carefully selected, cast is given an equal share of screen time, thus leaving no room for a clearly defined protagonist. However, Anya Taylor-Joy's Margot is more driven than the other guests and her strong resolve pays off in the movie's fiery conclusion that allows only one character to walk away unscathed. Mylod's film is visually stunning with the cinematographer's, Peter Deming, work being in complete harmony with the directorial tone. Colin Stetson's frisky musical score is the cherry on the pie, completing the picture of one of the most noteworthy cinematic productions of 2022. You shouldn't miss that one. 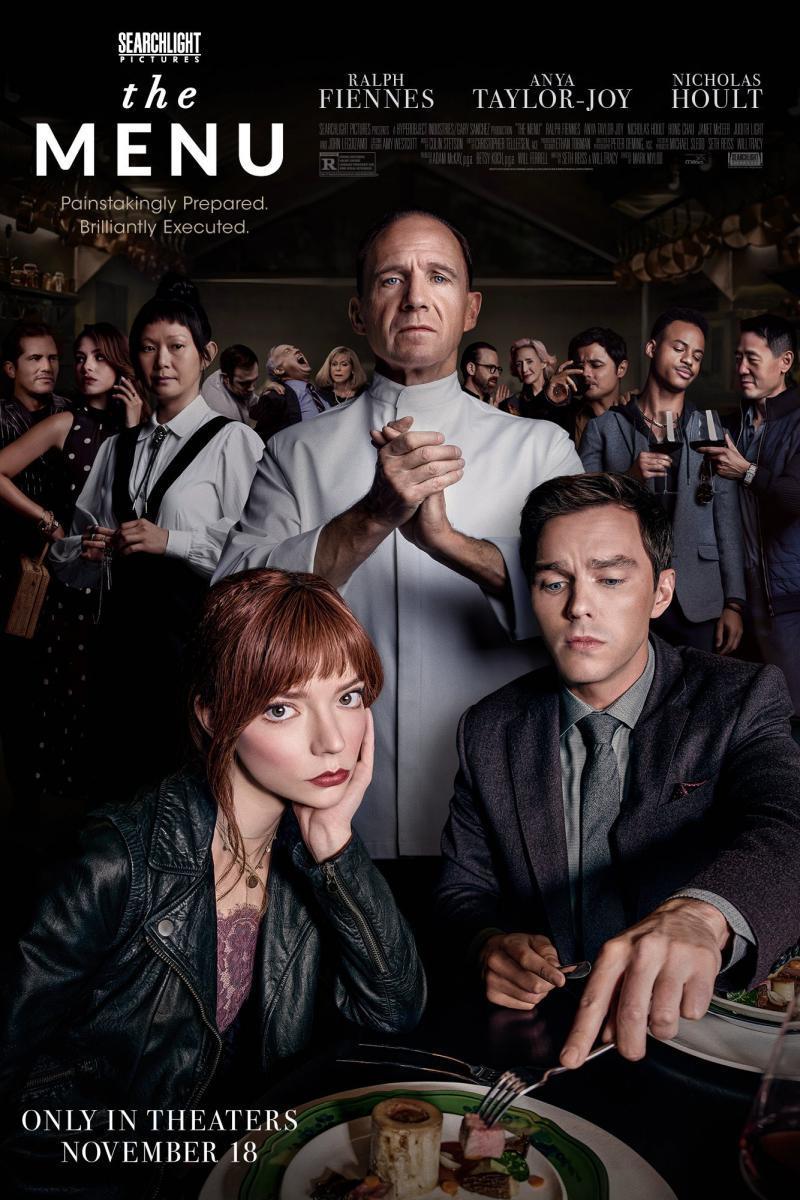