The Man Who Played With Fire

True crime book of the year! 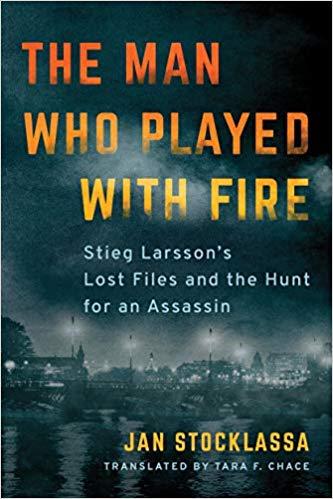 This is a tremendous true crime novel, based on the meticulous and detailed research made by the author, who had access to Stieg Larsson's archive from his years as publisher of the infamous "Expo" magazine. We all know Stieg Larsson as the man who was behind the publishing phenomenon of the Millenium trilogy, but only a few are aware of his work as a journalist which was dedicated to unmasking the extreme right in Sweden that gradually gained power from the beginning of the 1980s. Larsson began working in one of Sweden's biggest news agencies, "TT", as an illustrator and while he was working there, the unbelievable happened. The country's Prime Minister, Olof Palme, was shot in the middle of Stockholm's center as he was returning home along with his wife, Lisbet. Larsson who was by nature an inquiring individual began immediately to gather information regarding the murder that soon led him to some of his theories. The presentation of those theories is the main objective for Stocklaasa in The Man Who Played With Fire.

Palme's assassination ignited a vast number of conspiracy theories throughout the years mainly due to the fact that it was never solved. There are those who seem to believe that foreign intelligence services were involved, others that a hardcore far-right unit inside the Swedish police was behind the murder or that even groups as the Kurdish PKK were responsible for this terrible atrocity that stigmatized Sweden and it is called by many as "the most traumatic event in contemporary Swedish history". The above theories were named "tracks" or "trails" e.g. the "police track/trail" or "Kurdish track/trail. Larsson embraced a theory that put the South African intelligence services on the spotlight, as Palme was outspoken against apartheid, the policy that dictated that people should inhabit specific areas depending on the color of their skin, and his overall attitude made him many enemies. Of course, there is also hinted that the South Africans were helped by native far-right Swedes who -perhaps- had connections inside the police force.

Stocklaasa offers an analytical and well-drawn account of the aftermath of Palme's assassination and also outlines Stieg Larsson's character in a way that we are not used to. Larsson was not just a workaholic, chain-smoking individual following a terrible diet, all leading to his untimely demise. He was also a passionate person who attempted many great things through his work as a journalist and seemed to be unafraid of the various threats from his extremist enemies. Stocklaasa also met with Stieg's lifelong partner Eva Gabrielsson, who has also written a biography of Stieg, and with some of his friends and colleagues, thus delivering a luminous portrait of the man to the reader.

Though this is a book that would certainly be categorized in the true crime genre, the flow of the narration is reminiscent of a quality crime -or spy- novel. It is divided into many short chapters, thus unraveling in a fast tempo and you will find it hard to put down after reading the first few pages. It doesn't matter if you are familiar with the facts and trivia around Palme's murder, this book is so much more. It would be an excellent choice if you can read The Man Who Played With Fire along with another classic true crime book by Jan Bondeson, titled Blood in the Snow, a fact-based book on Palme's assassination and subsequent events.

If you are interested in the subject of political assassination and/or if you are a Millenium zealot, you simply cannot miss this book which will offer many insights an enlighten you in more than one way. As I've already mentioned you can read this almost as it was a fictional novel with an intricate, labyrinthine plot. The fact that all the characters and events truly exist makes it even more irresistible. The Man Who Played With Fire is also a must for all Scandinavian Studies and Nordic Noir scholars around the world. Furthermore, it is the perfect reference book to use when you want to learn something more about its subject. It is worthy of a solid 5-star rating.

The Man Who Played With Fire