The Man From Majorca

Leif G.W. Persson is one of Sweden's most outstanding criminologists and his work as a novelist has been hailed as highly influential among the contemporary representatives of Scandinavian crime fiction. The "Fall of the Welfare State" trilogy, a triad of books focusing on the intertwining of state and police corruption, is a masterpiece and his acidic critique of the authorities deems him as a controversial as well as fascinating crime writer. Persson's extravagant public persona led to his perception as an eccentric figure, living on edge and his novels often feature characters that share his own personal vices and flaws.

Lars Martin Johansson, Bo Jarnebring, and Evert Bäckström are only some of Persson's most delightful fictional creations and their adventures inspired several movie and television adaptations, the most prominent being the 4-part police procedural Death of a Pilgrim (2013), a show that portrayed the reopening of the unsolved case of Prime Minister's Olof Palme assassination on February 28, 1986. Rolf Lassgård played Lars Martin Johansson, a veteran officer who is assigned to re-examine the facts surrounding the case in order to find the weak spots in the original investigation that hindered the culprit's arrest.

The Man from Majorca is based on Persson's first novel The Big Party (original title: Grisfesten) and it is directed by Bo Widerberg (Love Lessons, Joe Hill). Sven Wollter (Man on the Roof, Van Veeteren) is Bo Jarnebring and Tomas von Brömssen (My Life as a Dog, Albert & Herbert) is Lars Martin Johansson in this rather old-fashioned motion picture adaptation that earns the audience's attention and respect mainly due to its tight script and natural performances. You should keep in mind that the film was shot in 1984, so the action sequences may seem a bit obsolete but the merits of this production lie in the talent of the director and cast that forces the viewer to overlook the low budget.

A robbery takes place in one of Stockholm's post offices and the first officers on scene are Johansson and Jarnebring. After a fruitless chase, the bandit gets away and the authorities have no evidence to help them with their investigation. The witnesses to the crime are found murdered and soon the case becomes more serious as the bodies pile up. The two detectives will have to plough their way forward mostly on their own as their superiors' behavior seems suspicious while some of their colleagues become the prime suspects. Fighting internal police corruption and striving to unearth a conspiracy that involves significant political figures, Jarnebring and Johansson will be forced to go rogue in order to reveal and punish the offenders.

The relationship between the two detectives is one of the highlights of the film. Their dialogues are plausible and very often hilarious as they are chasing cars and exhaust themselves in grinding stakeouts. Johansson is the most intuitive one while Jarnebring is more of a footsoldier, ready to do all the necessary legwork to close a case. Their boss, Dahlgren, is a heavyset bureaucrat who is struggling to balance his duty as a police officer with the political aspects of his work and he repeatedly attempts to set boundaries to his rebellious Inspectors. Persson's professional expertise makes the characters feel true and the audience is under the impression that they are witnessing the police procedures as they are in real life, raw and unrefined.

The ending is dubious and open to interpretation, leaving the viewer astounded and -perhaps- a bit confused. The director demands from his audience to think for themselves and there is nothing reminiscent of the convenient conclusions of the American crime films. The lack of catharsis renders The Man from Majorca a different kind of movie that emphasizes on the consequences of high-level malfeasance and the impossibility to go against an omnipotent system which oppresses the majority. This socio-political angle makes this movie to stand out and the Nordic crime fiction aficionados would certainly appreciate its main themes. Especially those who are fond of Maj Sjöwall and Per Wahlöö's novels will detect many elective affinities between Persson's work and that of the aforementioned authors. Recommended. 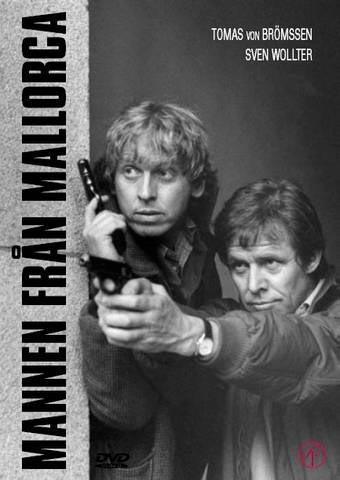 The Man from Majorca