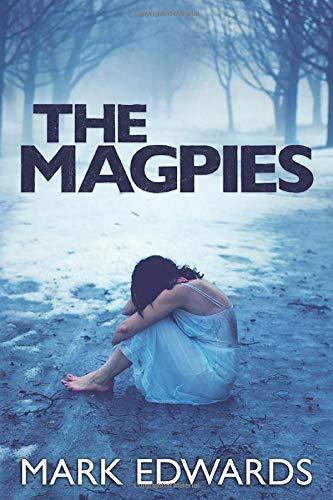 Mark Edwards is a hugely popular English author of domestic, psychological thrillers that enthrall the readership and has a vast number of loyal fans among the crime fiction devotees around the world. I've indulged in many of his novels and I admit that I love his work, especially books such as The Retreat, Here to Stay, and In Her Shadow. The Magpies is his first solo novel, published in 2013, and it is the first installment in the titular trilogy, followed by A Murder of Magpies and Last of the Magpies. The series of books revolve around Jamie and Kirsty, a couple of young people who move into the house of their dreams to build their love nest, only to find out that there is something truly sinister at play regarding their odd neighbors who live in the flat below them. Edwards is a skilled storyteller who knows how to build up tension and what begins as a sequence of innocent jokes and hoaxes soon escalates to a situation that threatens the couple's well-being, and perhaps even their lives. The Magpies adopt a formula that is reminiscent of Mark Edward's later novels as far as the plot is concerned and this is the book's main flaw, it seems to be generic to the eyes of the reader who is familiar with the author's posterior work. Nevertheless, it can act as the perfect initiation novel for those who wish to be introduced to Mark Edward's ominous universe that is made up of stories of common people facing egregious situations that will change them forever.

In the first chapter of the book, we read about another couple who move out of the flat which Jamie and Kirsty subsequently rent. The young woman, who is the narrator, talks about the disturbing experiences that she had to endure while living there and led to her decision to move out and live somewhere quiet, preferably with no neighbors living nearby. It is in the second chapter that we are introduced to the two protagonists, Jamie and Kirsty, a couple filled with dreams for their common future in their newly acquired home. But, from the moment they move in, strange things begin to happen. They start receiving parcels that they haven't ordered, the fire brigade knocks on their doors in order to extinguish non-existent fires, and pizza boys turn up to deliver non-ordered food. Both Jamie and Kirsty initially choose not to over-react to those hoaxes and they try to blend in, calling their closest neighbors for dinner. The couple living downstairs, Chris and Lucy Newton, seems to be friendly enough, though a bit strange, and a new friendship is in prospect. Nevertheless, when a tragic accident occurs that sends Jamie's best friend Paul, into a coma, things will begin to go downhill for both him and Kirsty as they soon begin to get disturbing letters from the Newtons who complain about the noise and sound threatening enough for the young couple to be unsettled.

As the plot evolves, Jamie and Kirsty will have to face a relentless barrage of hostile actions committed by Chris and Lucy that intensifies as time passes by. Finally, after Kirsty decides to move out on her own and return to her parental home, Jamie will have to take the most difficult decision in his life and fight back before it's too late. The Magpies is an entertaining domestic thriller and it brought to my mind the 1990 film, Pacific Heights, directed by John Schlesinger and starring Michael Keaton, Mathew Modine, and Melanie Griffith. It exudes an overall claustrophobic feeling that captures the reader and makes him root for the main character while at the same time abhorring the horrid villains. It definitely puts you in the mood for more and I will check out the next two installments as soon as possible. You should know that the next two chapters in the trilogy are written in the form of short stories that do not exceed the 100 pages each.