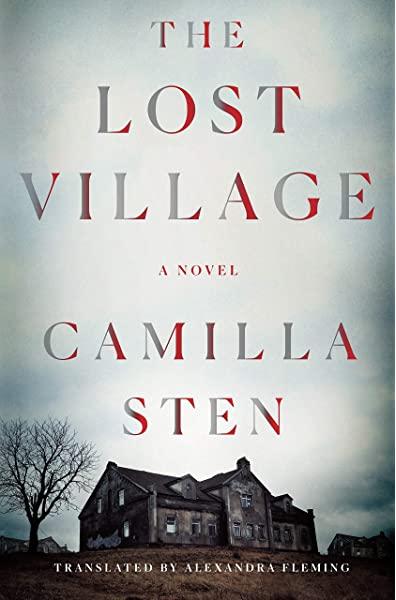 Camilla Sten is the daughter of the popular Swedish crime author Viveca Sten who is known for her Sandhamn murder mysteries set in the picturesque little island of the Stockholm's archipelago. The Lost Village is Camilla's internationally bestselling novel that is heavily reminiscent of the works by other Nordic crime writers such as Yrsa Sigurdardottir and Johan Theorin, while its plotline is similar to that of the infamous American horror b-movie, Blair Witch Project. In her brief foreword note the author stresses the importance of the accurate portrayal of women battling with mental illness in the book as there are three main female characters fighting with their inner demons. Sten makes a point about how people used to perceive and treat mentally ill women throughout history and she writes that she is grateful that her own struggle with depression took place at an era when she could have access to a healthcare system that recognized her condition as a treatable one. In the past times those women were demonized and scapegoated as societies tended to view them as the source of all kinds of evil. The representation of mental illness in The Lost Village is sensitive and humane, while it raises some crucial questions regarding our tendency to consider mentally ill people as abnormal. This is one of the main themes of the novel and it pervades the whole of the story.

The book's setting is the old mining town of Silvertjarn, a remote, desolate place that got abandoned by its inhabitants sixty years earlier and their disappearance is considered to be one of the biggest mysteries ever for the Swedish people. The book is a fine blend of horror and mystery fiction and the suspense level is kept high as the story evolves and reaches its climax in the concluding part where all the disturbing occurrences that take place throughout the novel are explained and every piece of the puzzle falls into place. The author hints at the possibility of supernatural intervention and the reader gets mesmerized by the enthralling descriptions of an ominous, hostile place that seems to repel any visitors who wish to explore and learn more about its unsettling history. Sten's writing style is captivating and her masterful use of the double timeline narrative technique is exemplary as the story jumps back and forth in time between 1959 and the present day. The two timelines share a complementary relationship and major plot points are revealed in the right time, thus keeping the reader betrothed and on edge.

Alice Lindstedt is an aspiring documentary filmmaker who embarks on a risky journey to shoot a documentary, dubbed "The Lost Village", that will shed light to the mysterious circumstances surrounding the vanishing of a whole town six decades earlier. Alice is personally connected to the bizarre story as her great-grandmother, Elsa, was one of Silvertjarn's more than 900 residents to disappear from the face of the earth. Alice's grandmother sparked her passion for the town's history as she used to narrate to her daughter old family stories that shared a common denominator: the tragic fate of the residents of Silvertjarn that marked her life forever. In the present timeline we follow Alice and her crew of four people than consists of Emmy, Robert, Max, and Tone arriving in Silvertjarn in order to shoot a teaser for the upcoming documentary. Being on a tight budget, they only have five days to scout the place and shoot some scenes that are meant to attract the attention of potential producers. But as they settle in the place, inexplicable things begin to happen. Mysterious figures seem to stalk the crew, the radio receives some disturbing signals, and soon one of the members disappears without a trace leaving the rest in shock.

In the past timeline we read about Alice's great-grandmother, Elsa, who lives in Silvertjarn along with her husband, Staffan, and daughter, Aina. The town is in decay as the mine is closed and most of the residents are out of a job. Staffan hits the bottle and Elsa's family life upends when a new vicar, Mattias, arrives in town and seems to be able to enchant his flock due to his charisma and charm. Aina becomes bewitched with Mattias and soon her behavior towards Elsa begins to change in a way that is both unpleasant and alarming. Mattias becomes a kind of occult leader who claims that he holds the keys to the people's salvation and his preaching ripples the surface of Silvertjarn's quiet waters. Deeply troubled by Aina's conversion, Elsa will attempt to save both her family and a troubled woman, Birgitte, who lives alone and isolated because of her crippling mental state that doesn't allow her to function as the rest of the town's residents do. As the situation unravels, things will get more and more wild in town and Birgitte will be persecuted and victimized by the mass of folk that follow Mattias's word.

I found The Lost Village to be one of the most entnthralling Nordic thrillers that I've read in the last few months and it brought to my mind another classic of the genre, I Remember You by the Icelandic "Queen of Crime Fiction", Yrsa Sigurdardottir. Both novels are based on a analogous plot premise and use the double timeline narrative expertly. The relationship dynamics between the documentary crew are complicated and we learn more about the relationships between the members as the story unfolds. The strained liaison between Alice and Emmy is the most interesting one as it is linked to the main theme of the novel that is the perception of mental illness by the majority of the people. The dialogue is plausible and the final explanation is more than gratifying. To sum up, this book was a pleasant surprise and a great introduction to Camila Sten's body of work that is comprised of novels of various genres such as YA, thriller, and horror. It seems that she inherited the talent from her successful mother, Viveca, and I believe that the readers will have the chance to read more of her intriguing books in the near future.