The Last Thing to Burn

A tale about redemption by Will Dean. 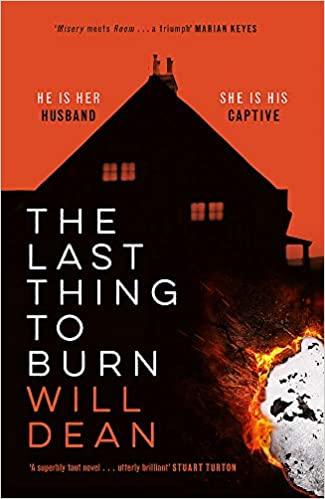 Written by the author known for his renowned Tuva Moodyson series set in the fictitious northern Swedish town, Gavrik, The Last Thing to Burn is a completely divergent novel, narrating the harrowing tale of a young Vietnamese immigrant who moves to England in order to build a better life only to be imprisoned by a monster. Will Dean proves that he is as versatile as a writer can be, giving voice to a tortured protagonist who tells her disturbing story in vivid detail and describes her horrid everyday reality, living along with a deranged individual who exploits her every fiber of being to fulfill his own sick desires and phantasies. There are several major differences between the Tuva installments and this book as in the latter, the focus is solely on the damaged soul of the first-person narrator while the intricacy of the plot takes a back seat. There are only four characters featured in the novel and the vast majority of the pages expose the protagonist's inner thought process that reflects her impaired physical and mental integrity. The reader can easily root for Thanh and embrace her battle against the tyrannical figure who cut her life into pieces and turned her into a pitiful, pathetic creature. Dean's prose is simple and austere, accurately describing the excruciatingly limited universe in which Thanh lives and his writing skills are evident in the parts where the narrator relays her disturbing experiences that shaped her current mood and personality.

Nine years ago, Thanh along with her baby sister, Kym-li, moved from Vietnam to England dreaming of an exciting future promised by the people who convinced them to take the big leap. Their dreams turn into a nightmare when they arrive in the new, unknown country where they have to work crazy hours to be able to pay their debt to those who arranged their transport. Soon, Thanh is bought by a farmer who lives in a secluded house in the middle of nowhere. Her sister stays back in Manchester and when Thanh arrives at her new home, she quickly understands that she is nothing short of a prisoner. Lenn, the aforementioned farmer, is a rough, strong man who has lived his whole life in that house and he is determined to use Thanh as a kind of surrogate for his deceased mother, Jane. As time goes by, Thanh is confined inside the house and Lenn has installed CCTV cameras in order to be able to check her every move. Each time she fails to meet her tormentor's demands and expectations, Lenn takes one of the few personal items she still clings to and burns them in the Rayburn stove. But when Thanh gets pregnant, everything changes as she decides to keep the baby and give her the future that had been denied to herself.

Little Huong's birth will gradually alter the relationship dynamics in the wretched house and Thanh will become more powerful as her daughter grows up. This bundle of unrealized potential allows Thanh to become all the more determined to free herself from Lenn's shackles and take action that previously seemed to be completely out of question. The reader witnesses the protagonist gaining strength from her relationship with her child and her sense of self-worth increases as the story builds up. In the end, Thanh will have completed her journey of self-discovery and she will have earned what previously seemed impossible. It's quite rare to encounter such a fascinating character in the genre, a true hero who faces her destiny with stoicism and a boldness reminiscent of that expressed by the protagonists in an Ancient Greek tragedy. I found Than's character arc to be brilliant and her story shook me to the core. The ending is moving and compensating for the reader who can't help but identifying with the protagonist.

The Last Thing to Burn is a tale of liberation and redemption and you should brace yourselves for a heartbreaking story that becomes slightly more optimistic as the plot evolves and reaches its climax. It brought to my mind the novels by Karin Fossum in terms of the in-depth psychological exploration of a character and the overall depressing mood and tone that permeates the text. Even though, as I mentioned in my introduction, it is not a book that can be compared with the rest of Will Dean's work, it is equally intriguing and absorbing. Furthermore, it's a rather short novel, about 250 pages, and it doesn't get tedious so you can easily finish it in just one or two sittings. I enjoyed it very much and I can recommend it both to the fans of Scandinavian crime fiction and those who know to appreciate crime novels daring to engage with unpopular themes such as human trafficking and domestic abuse. I can only wish that Will Dean will continue to create work of similar quality and engross the global crime fiction readership.

The Last Thing to Burn