A hilarious companion for the fans of the emblematic Danish TV series "Forbrydelsen". 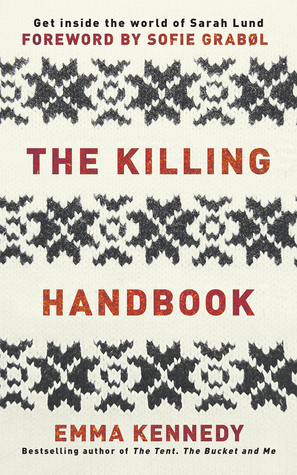 Emma Kennedy is a die-hard fan of one of the most popular and beloved Danish crime dramas, the legendary Forbrydelsen, a show that became a cornerstone for the emerging Nordic noir phenomenon. The author is perhaps the most zealous aficionado of the series and she became acquainted with members of the cast like Sofie Gråbøl, the actress portraying the female detective icon, Sarah Lund, who also writes a short introduction to this little companion book. There is an interesting interview, given at Nordicana Festival (2015) where Gråbøl discusses her acting experience with the author of this handbook, Emma Kennedy. The popular Danish actress also comments on many of the author's remarks regarding the plot and characters in the series. Furthermore, there is a synopsis of all three seasons' plotlines along with the introduction of the main characters with a short paragraph describing the peculiarities of each one, all written in a fine sarcastic style that made me laugh too many times. It should be noted that Forbrydelsen was one of the first Scandinavian TV shows to export in the U.K. where it met a warm reception both by the audience and the critics. The German distributor ZDF Enterprises sold Forbrydelsen as The Killing to BBC 4 and paved the way for an American adaptation of the series, starring Joel Kinnaman and Mireille Enos, which was also rather successful. In Denmark. Forbrydelsen was a sensation and over one million viewers watched the final episode of the first season where the killer of Nanna Birk Larsen is finally revealed.

Emma Kennedy's book though is not limited to the reality of the series, but also contains chapters introducing the Danish way of life in a variety of diverse dimensions such as Politics, Dating, Interior Design, and others. I found the chapters on the series' seasons more interesting and I could have skipped the other information, even though I suppose that it's ok to learn a thing or two more about the infamous Danish lifestyle. In her introduction, Sofie Gråbøl states that she is writing this short foreword note, a day after the ending of shooting for season 3 which would also be the last for the show. There is a kind of melancholia in her tone and she writes that she will never forget the shootings of the series and the intense, emotional charge of some of the scenes.

If you are a keen Forbrydelsen fan and a Nordic noir loyal follower, you should buy this little book and, surely, you will be entertained and you won't regret it.