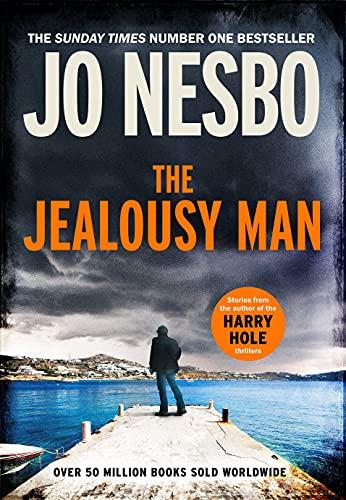 When an author of Jo Nesbo's caliber publishes his first ever collection of short stories, then the readers ought to brace themselves for a wholly different approach of storytelling by a writer who has linked his name with the notorious Harry Hole saga and plenty of groundbreaking standalones. Of course, the limited length of a short story or a novella doesn't allow Nesbo to fully illustrate his immense skills in intricate plotting or his aptitude in meticulous descriptions, but his genius finds new ways to shine through the use of extensive dialogue parts where the characters ponder on a variety of issues regarding the human condition. The exchanges are witty, full of insights and incisive remarks that constitute the main narrative vehicle through which the stories propel forward.

In The Jealousy Man, Nesbo's objective is to expose the machinations and volatile dynamics of envy, one of the most archaic and dominant passions that directed and dictated the behavior of humans since time immemorial. But this concerns only the first part of this collection as in the second the Norwegian superstar author focuses on the lust for power, another prime motivator for men's actions. Both the aforementioned themes are explored thoroughly through several short tales of revenge, unreciprocated love, and overwhelming greed. The book's twofold division leads to a kind of loose segregation between the parts and the reader always knows the basic motif of each story, even though jealousy and power always seem to be the two sides of the same coin, interconnected and held together by the same raw material which is the cause of human suffering.

The titular story is set in the Greek island of Kalymnos, a place known to the author as he is a repeated visitor during the hot summer months, and the protagonist is Detective Inspector Nikos Balli, nicknamed "The Jealousy Man" due to his troubled past love life. Nikos will travel from Athens to Kalymnos to help the local authorities with the case of a tourist's disappearance, who was last seen arguing with his brother, Franz, in a bar. Franz is the primary suspect and Nikos will have to use his unique intuition and special interrogation skills to ascertain his guilt. The case takes many twists and turns and Nikos will have to face his demons and recall hurtful memories as he zeroes in on the perpetrator. His expertise on crimes committed out of jealousy makes him the ideal man to solve the puzzling case which ends with him admitting his own misdeeds in search of redemption.

"The Jealousy Man" is more of a novella as it exceeds the 100 pages and consists the core of the first part of the collection. Apart from that story, there are several other intriguing narratives such as "London" which takes place in an aircraft where two strangers, a man and a woman, meet for the first time and instantly fall in love after the woman's disturbing's confession. Nevertheless, the man also harbours his own secrets and the finale is shocking and totally unforeseen. In "Odd" we follow the sad steps of an acclaimed writer who seems to care more about the quality of his writing than his public image and his romantic entanglement with a young woman that challenges his overall perspective on life. Odd is an odd as well as fascinating character and we witness his inner struggle as he realizes that he has to choose between happiness and his calling as a writer. "The Earring" is a story of deception and revenge initiated by the random finding of a lost earring in the back seats of a taxi.

"Cicadas" is the story that stands out in the second part of the book as it is a mixture of romance and science fiction featuring Martin and Peter, two close friends who decide to go to Spain in order to attend the notorious Pamplona Bull Run, an exciting as well as dangerous local tradition that attracts tourists from all over the world. As they reside in the nearby town of San Sebastian, Martin save a young girl from drowning and from then on both the protagonists will become enamored with her, leading to a friction between them as each one falls head in heels in love and they are willing to even betray each other if that means that they will have a better chance in winning her. I also enjoyed "The Antidote", a tale about the strained relationship between a father and a son set in the remote Botswana where the two characters work as snake farmers.

You should keep in mind that Nesbo experiments and adopts a new writing style and as I was reading, I thought that if I've read this book without knowing the author, I couldn't possibly imagine that this is a Nesbo's text. Perhaps this is true due to the distinctive structure of a short story, but even so, his prose seems to constantly evolve to something better, more substantial. I've read all of his novels so far and I can unreservedly say that The Jealousy Man is his most distinguishable work. So, if you're expecting something in the lines of the Harry Hole series, you'll most certainly be disappointed. In The Jealousy Man, the Norwegian author discloses another aspect of his versatile writing persona and puts the emphasis on the discourse rather than the plot. It's a first class study on the two main themes, jealousy and power, cloaked in a cover of mystery and intrigue. Many of the observations uttered by the characters stay with you and prompt you to think out of the box regarding central human weaknesses.

To conclude, the experiment is deemed as successful and Nesbo proves once again why he is considered as one of the most outstanding narrators of our time. Of course, nobody will like all the stories equally, but I'm sure that all the readers will find their own favorite little tale depending on their character and interests. The uneven feeling that plagues the majority of the similar collections of the genre is not present here and the book feels more like a unity than an array of separate stories. I would love to see more Nordic crime authors attempting to write novellas or short stories as their framework permits the writer to pursue a different path as far as the way of storytelling is concerned.