When I heard that Martin Scorsese is directing a gangster film based on the novel by Charles Brandt, titled I Heard You Paint Houses, a true-life account of Frank -"The Irishman"- Sheenan, a mafia hitman who according to the interviews he gave to Brandt claimed that he is responsible for -more or less- twenty-five murders, including that of Jimmy Hoffa. For those unfamiliar with James Riddle Hoffa's story, it should be mentioned that he was the leader of one of America's biggest labor unions, "The International Brotherhood of Teamsters", one of the most powerful and influential in the country. Hoffa was the President of the Teamsters from 1957 till 1971. Furthermore, he was a highly controversial figure who dared to oppose some of the most prominent figures in the American political life of the 60s and 70s and one of them was Robert -Bobby- Kennedy, the bother of the legendary John Fitzgerald Kennedy who was murdered in Dallas in November 1963. Robert -who was also assassinated in June 1968- while being the chief counsel of the Senate Labor Racket Committee blamed Hoffa openly for corruption. Hoffa was known to have connections to organized crime and it was rumored that he was a personal friend of some of the most notorious gangsters in the country at the time. He was imprisoned in 1967 and sentenced to 13 years for attempted bribery, jury tampering, and fraud. Finally, he was pardoned by the Nixon Administration on the supposition that he resigned from the union's Presidency. Nevertheless, the main reason that the name of Jimmy Hoffa is familiar to all Americans is his mysterious disappearance in 1975 which remains unexplained till today.

As can anyone imagine any book or movie regarding Hoffa is of special interest, especially if one of them claims to know the truth of what finally happened to him. Furthermore when the cast is announced and you learn that one of the most important thespians of his generation, Al Pacino, will portray the erratic and impulsive Teamsters leader the excitement is doubled. The icing of the cake was that Robert De Niro, an actor whose collaboration with Scorsese in the past delivered some of the most iconic films such as Taxi Driver and Mean Streets, would play Sheenan.

The result of the above was that my expectations from The Irishman were perhaps a bit too high so one can claim that I was doomed to feel unsatisfied or disappointed with this film. I was eager to watch it so I devoted some of the most productive hours of a day to absorb every single aspect of the movie. Unfortunately what I comprehended was that some great actors should retire before their age becomes a burden, tainting their reputation and directly influencing, in a negative way, their performances. The sight of De Niro playing Sheeran in his forties was hard-to-watch as his body movements were that of an old man struggling to imitate those of a person half his age. Apart from that, there is no brightness in his performance, nothing reminiscent of De Niro's brilliance that the audiences loved in the previous decades. Al Pacino plays more himself than Jimmy Hoffa and his overall performance is significantly inferior to that of Jack Nicholson in Danny De Vito's, Hoffa (1992), a movie that comprised a more historically accurate portrayal of the man. The only member of the cast that does a truly decent job and doesn't seem out of place is Joe Pesci who portrays an elderly gangster who initiates Sheenan in the criminal underworld and lifestyle.

The narration of the story in the first hour of The Irishman brings to mind Scorsese's Goodfellas with short segments of dialogue and action, montaged in a really fast tempo and lacking a clear, narrative center. The plot thickens only then Hoffa is introduced in the film and Sheenan becomes his right-hand man. We watch as Hoffa's life gradually crumble and his friends decide that they finally have no need for him or his services and decide to kill him. Sheenan claims that he was the man that pulled the trigger and the movie stays loyal to the book, not altering any major plotlines. If you haven't read Brandt's book or if you are unfamiliar with the whole Hoffa case, then watching The Irishman may prove an instructive as well as entertaining experience. On the other hand, all those who hope that this gathering of superstars in this production will produce an unforgettable result, equal to their almost mythical status in the world of contemporary American cinema will feel betrayed in the end. 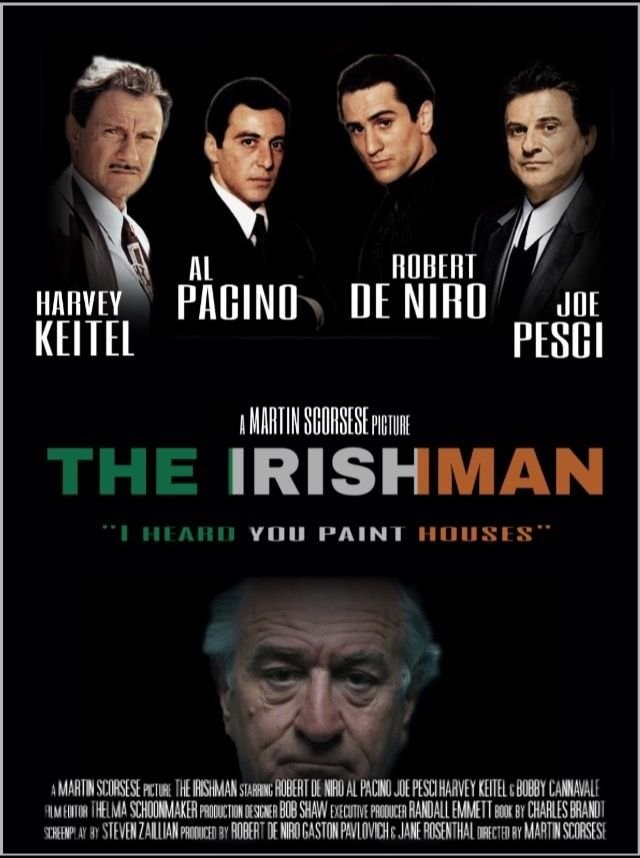